Mediocre marmalade and some handy ratios

Oh dear. I’ve been silent on the subject of the World Marmalade Awards at Dalemain this year which were held at the beginning of March.

It’s time to disclose that this year I achieved marks of only 15 out of 20 for my Seville orange marmalade and, slightly better, 17 for the bergamot. This compares to the almost perfect score of 19 last year and, worst of all, to husband Tim’s respectable score of 18!

So what went wrong? I did go and chat to the white-coated WI judges this year. It seems I went a little bit too far with my liking for a soft set, and once again my marmalade was criticised for being cloudy. This is a tough one to crack but their advice was NOT to squeeze the muslin bag containing the pectin-rich peel and pips.Just to remind myself for next year, previous advice on achieving clarity was NOT to add the knob of butter when boiling but to skim, skim and skim again, also to add a just a dash of alcohol at the end when ready to pot.

On reflection, my peel was slightly unevenly distributed within the jar. Thinking back, I potted hot straight from the pan relying on a gentle shake to redistribute the peel but was distracted from doing this by a teenage tantrum shortly before setting off to a match at the Etihad stadium…The lesson is that marmalade cannot be rushed.

So far so fair. I felt somewhat peeved to have been docked a mark for having placed my label a few millimetres too high up on the jar. The WI ladies like it low it seems. I did subsequently have a look at The National Federation of Womens’ Institutes “On the Show” publication which states:

“Labels should be plain, neat and straight and of suitable size for the container. Place label between the seams of the jar. Label should state contents and day, month and year of making.”

Hmmm, nothing about vertical positioning of labels here. I think I was robbed.

Bitterly disappointed but undaunted I went along to the marmalade Q&A session to learn how to correct my mistakes and also to try and answer a couple of queries raised by a like-minded friend Shelley who had written a week or so earlier as follows:

“Really nice to talk to you about marmalade last week. Looking at your notes and reading various recipes gave me quite a bit to think about. The part in the recipes that was puzzling when I made mine this year was in the Riverford recipe which states 1.5 kg oranges, 2 lemons and approx 2.5kg sugar BUT in the video on the Riverford website the guy says after boiling there should be approx 1.7litres of liquid and then to add 450g sugar per 500ml which would only require 1.53 kg sugar so big discrepancy. As I mentioned to you I have always been a bit puzzled by the fact that the amount the liquid reduces by can vary between batches so I quite liked some guidelines on how much liquid should be left.

I would like to try another batch just to see if I can get a different result but it is getting late in the season and I’m not sure we could eat it all anyway.”

First of all Shelley, I have to admit to a typo of my own – the recipe actually said 2kg of sugar and I then typed it incorrectly as 2.5kg. There’s still a discrepancy but not as bad as it first appears.

I put the water question to the panel comprising from L to R Jane Maggs of Wild and Fruitful; Jonathan Miller preserves buyer for Fortnum & Mason, compère Dan “Master Baker” (careful how you say that) Lepard, Pam “The Jam” Corbin all round preserving expert and author of Preserves: River Cottage Handbook No.2, and finally Rosemary Jameson, the Jam Jar Shop lady.

There was unanimous agreement that it would make perfect sense to put a lid on your pan and use less water. For reasons of custom, tradition and utility most recipes expect you to add water to the peels in a non-lidded preserving pan, boil for 2 hours to soften the peel by which time approximately half the liquid will have boiled away. Most people used to have just one large unlidded preserving pan thus recipes were drafted to take account of the larger amount of water needed.

Jane Maggs said that most standard marmalade recipes adopted a rule of thumb by which for every 1lb fruit, 2 pints water and 2lb sugar were required. If half the water boils away then you’re left with 1lb fruit and 1 pint water which is matched to 2lb sugar giving approximately a 50:50 ratio. There is approximately 5% natural fruit sugar in the boiled peel liquid so that plus the small amount of evaporation that takes place when boiling for a set will give you the right sugar percentage of around 60% to achieve a set.

Thinking afterwards, there’s an unstated assumption that 1 pint water weighs 1lb. It doesn’t unless you use a US style pint which is just 16 floz rather than our UK 20 fl oz pint.

Looking again at the Riverford recipe, I think it’s never going to work matching 450g sugar to 500ml liquid. All that will happen is that the liquid has to boil away until the correct balance is achieved. Next time I’m going to work with a 1:1 ratio. This will require 1.7kg sugar for 1.7 litres liquid, so still a discrepancy with the 2kg weight of sugar stated in the ingredients list but not so great any more.

The other difference between the Riverford marmalade recipe and the standard ratios is the proportion of water added (2.5 litres) to weight of fruit (1.7kg once lemons are taken into account). The standard ratios would suggest 3.4 litres water (twice the weight of the fruit). I wondered why this might be and remembered that the Riverford recipe uses only finely shredded peel removed from the whole fruit using a peeler. This means that all the pith which is used still attached to the peel in a standard recipe is discarded in the muslin bag. As less fruit is used, so the quantity of water needs to be less. I assume that what the recipe wants is for the boiled liquid to be equivalent to the weight of fruit you first started with (1.7kg fruit for 1.7 litres water) which sounds both nice and neat and inherently sensible in terms of achieving a good concentration of flavour.

So that’s it – rather technical I know but at least I’ve recorded my thinking ready for next year. And if I can’t achieve a clear marmalade I can be happy in the knowledge that Jonathan Miller, buyer for Fortnums will only ever consider cloudy marmalades as these have more flavour.

I wrote about Castelfranco radicchio last year after saying I’d becoming obsessed with trying every radicchio variety I could lay my hands on. It’s high time I returned to radicchio, originating from the Veneto region of Italy, and this time it’s the turn of the striking radicchio Tardivo. As I’ve mentioned before, I sourced my radicchio from the Natoora range of speciality vegetables and salads stocked by online supermarket Ocado. Others may get their fix from buying expensive shoes or handbags. It’s a new vegetable that does it for me…

Many varieties are named after local towns but this one bucks the trend, tardivo simply meaning “late” in Italian. It’s produced by starting with the more common Radicchio di Treviso (which is a town in Italy) which then undergoes ra complex growing-forcing method of cultivation. This somewhat akin to our own home-grown Yorkshire rhubarb and producing a similarly startlingly-coloured beautiful plant to brighten up late winter meals. Sorry, but the season ended in March so you’ll have to wait until, say, next November to try it. Looks like I’ve been somewhat tardiva myself. 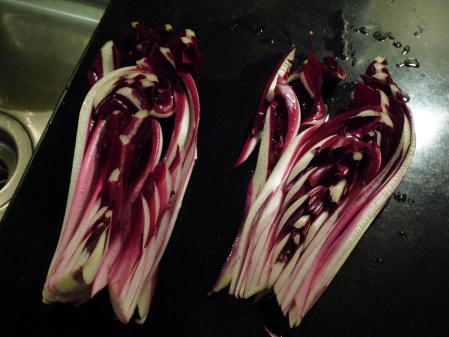 Don’t try and put tardivo into a salad – it’s best cooked either simply as a roast vegetable (see my recipe below) or used as an intriguing ingredient in other recipes.

I was searching around for more radicchio tardivo recipes and came across this one from on Italian recipe site Giallozafferano which in turn comes from the lovely blog La Salsa Aurora.

I’ve rather freely translated it and adapted it for flour we can easily buy in the UK. Be warned I haven’t tried the recipe myself yet so can’t vouch 100% for the quantities and timings. I really like the sound of a dark rolled-up pizza-style affair and think the inclusion of rye flour should work really well with the gutsy flavour of the radicchio.

This is my own tried and tested way of cooking radicchio more or less the way the Italians do it. It makes a good accompaniment to roast pork or veal. The slight bitterness of the roast leaves is very agreeable with rich-tasting fatty meats. Sadly the glorious magenta of the leaves turns to workaday brown when roasted.

Preheat the oven to 180 degrees C (fan). Strip off any bruised outer leaves from the tardivo, rinse it under cold running water and shake/pat it to remove excess water. Cut in half lengthwise and cut out the bottom of the root by making a small V shaped notch in each half but keeping the half piece intact. Lay the halves on a baking tray, overlapping a little if necessary. Drizzle with 2-3 tbsp of the olive oil and sprinkle with salt and pepper. Bake for about 10 minutes, remove from the oven and drizzle with the remaining oil. Bake for 5 minutes’ more. It is done when the root is tender. The leaves will be thoroughly wilted and brown.

Recipe for savoury strudel with radicchio tardivo and mozzarella

Adapted from a recipe found on the Italian blog La Salsa Aurora.

Mix together the flours, salt and yeast. Add the water and mix with a wooden spoon. Leave for 10 minutes, covered, then knead in the bowl briefly and rest again for 10 minutes. Repeat twice more then lightly oil the dough, cover and leave to prove for 1 hour.

Whilst the dough is proving, prepare the filling. Drain the mozzarella balls and tear into rough pieces with your fingers. Set aside.

Wash, dry and trim the radicchio and separate it into individual leaves. Set aside.

Once the dough has proved, knock it back and divide it into two equal pieces. Roll out the first piece reasonably thinly into a rough rectangle (as if you were making a rectangular pizza) and transfer it onto a baking sheet, stretching it into shape. Scatter over half of the mozzarella and radicchio and drizzle liberally with olive oil. Season with salt and pepper and sprinkle over half the chopped parsley. Roll up and press the dough edges together, moistening the dough to achieve a good seal. Drizzle with more olive oil and scatter a little sea salt over the surface.

Repeat with the second piece of dough.

You are currently viewing the archives for April, 2013 at The Rhubarb Fool.