I’ve been well and truly caught out by events. When I began investigating the Central African Republic (“CAR”), it seemed to me to be one of the world’s most anonymous nations but has since been catapulted into the headlines following the outbreak of civil war.

The country’s population is estimated to be some 4.5 million in a country comparable in size to France, coincidentally the former colonial power. Much of the country is taken up by the Ubangi and Chari river basins. The capital city, Bangui, is on the banks of the mighty Ubangi river that flows south to Congo and defines the border between the Central African Republic and the Democratic Republic of the Congo for much of its length.

Since gaining independence in 1960 the CAR seems to have suffered more of its fair share of misfortunes. The notorious Jean-Bédel Bokassa 1 was crowned “emperor” 1977 in a lavish ceremony watched by the world’s media. Since then, coup has followed coup more or less to the present day. Michel Djotodia, leader of the Séléka rebel alliance seized power March 2013 deposing President François Bozizé. The country has since descended into anarchy with the Christian anti-balaka militia (balaka means machete) retaliating against the mainly Muslim Séléka rebel group. Djotodia has now stepped down leaving a peacekeeping force of 1,600 French and 4,600 African troops vainly trying to control the violence. One can only hope that the new interim civilian government can deliver on its pledges to halt the violence and to organise elections by February 2015.

From this country of diamonds, timber, virgin rainforest and fertile river basins comes a recipe for the freshwater fish Nile Perch cooked in banana leaves. It seems somewhat frivolous to say so but is nevertheless true that this is a very attractive way of cooking and presenting any white fish fillets (I give the recipe below).

Given the circumstances, this was a somewhat sombre breakfast. 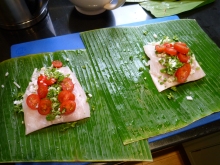 Somewhat to my surprise, I was able to source authentic Nile perch from online specialist retailer The Fish Society and found banana leaves in one of the specialist food shops in Manchester’s Chinatown.

Mix thoroughly together in a small bowl the chopped onion, garlic, parsley and chilli.

Put a quarter of the onion mixture in the centre of each pair of leaves then sit a fish fillet on top, followed by another spoonful of the onion mixture. Top with the tomato slices then wrap the banana leaves over the top to form a parcel and tie each one securely with string.

Place the banana leaf parcels on a rack set over a deep roasting dish half-filled with water.

Carefully transfer to an oven pre-heated to 200°C and bake for 20-25 minutes, or until the fish is tender. Serve directly from the parcels and accompanied with fried plantains and/or boiled rice.

You are currently viewing the archives for January, 2014 at The Rhubarb Fool.