I have never been to Antigua so this was a virtual voyage of discovery for me. Fancifully, I see the whole Caribbean archipelago as the curved vertebrae of some fantastic fossil creature.  At the top there is Cuba, next the island of Hispaniola comprising Haiti and the Dominican Republic, then Puerto Rico.  The remaining islands dwindle in size curving gracefully towards the South American mainland coast.  Antigua is one of the tiny vertebrae at the base of the spine slotting in not far below Puerto Rico.

The island’s name was given to it by Christopher Columbus in 1493 in honour of the Santa Maria La Antigua (St Mary the Ancient) church in Seville.  The British occupied the island from 1632 and soon established a lucrative sugar trade based on slavery.  Nelson established a naval dockyard there in 1725.  Antigua remained under British control until 1981 and it remains part of the Commonwealth.

Based on a quick web search for information and pictures, Antigua is clearly now reliant on tourism and is chock full of expensive hotels catering mainly for a US clientele.  I settled on the Carlisle Hotel “situated on the unspoilt south coast of Antigua overlooking one of the most beautiful bays in the Caribbean”.  It is one of just four hotels collectively forming the of the Campbell Gray group of four hotels. Other group members are One Aldwych and Dukes in London and rather oddly, a gaff in Beirut.

Back to the Carlisle. From the hotel’s “Indigo on the Beach”  breakfast menu I picked out the following dishes with a bit of local colour:

Coffee and mango juice to drink

Whilst I’m on the subject, what a disaster area the Arndale Market is! It’s indoors, partly underground, and nail bars rub shoulders with food stalls resulting in a strange aroma which is an unholy combination of salt cod and acetone.

I recall that various council officials visited Barcelona’s Boqueria market to gain inspiration for the Arndale market revamp a few years back. Clearly they either suffered from a lack of imagination or else failed to put into practice what they saw.  However there are a handful of stalls which buck the mainly dismal trend, Strawberry Garden being one and the fantastic looking but unimaginatively named “Direct Fish” fishmongers popular with Chinese and Caribbean cooks being the other.

Plantains can easily be mistaken for bananas but this comparison shot show the differences.  Plantains are super-sized, a bit more fibrous and even when ripe rather more green than a banana. 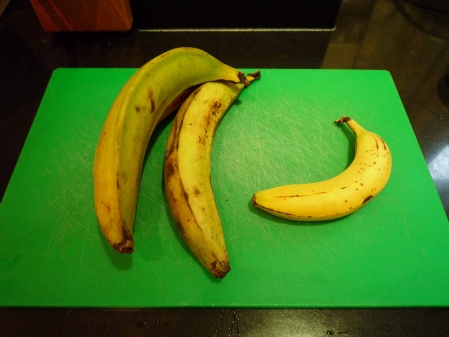 Fried for a couple of minutes each side in hot oil they morph from soft, sallow slices into a crispy, golden-brown starchy mouthfuls of heaven.  A great addition to breakfast.

Just the banana bread to bake and we’re ready to go.

There are hundreds of banana bread recipes out there. One  which I use regularly is  Gary Rhodes’ recipe which is really more of a sticky cake than a bread.  Bill Granger has a gorgeous breakfast recipe for chocolate and banana loaf which is heavenly if made with grated unsweetened dark chocolate.  I found one recipe on the web which purported to be authentically Caribbean and had a delicious flavour  from the inclusion of Muscovado sugar and grated nutmeg but the texture was not good – too crumbly.

The banana bread recipe which I can recommend comes from the ever-reliable Four Seasons cookbook by Margaret Costa.  I’ve swapped her caster sugar for Muscovado and added a handful of chopped walnuts and a flavouring of grated nutmeg to pick up on the best points of the Caribbean recipe.

Cream the butter and sugar together until light and fluffy. Beat in the egg and banana pulp. Add, alternately, the flour sifted with the salt and nutmeg and the yoghurt. Fold in the chopped walnuts.  Pour the mixture into a greased loaf tin and bake for an hour at 180 degrees C (350 degrees F; gas mark 4).

Slice thickly and spread with butter if you like.

In the depths of a UK winter, after a breakfast like this, you can imagine being wafted away to the warm Caribbean overlooking that beautiful bay from the Carlisle hotel terrace….

You are currently browsing entries tagged with Antiguan breakfast at The Rhubarb Fool.