Nourishment for the traditionally built: breakfast from Botswana

I chose to learn about Botswana via the gentle medium of Alexander McCall-Smith’s bestseller “The No.1 Ladies’ Detective Agency” featuring the “traditionally built” heroine Mma Ramotswe. I was also helped by Stuart Brown’s “Mma Ramotswe’s Cookbook”, almost a companion volume to the series and a browsable mix of cookbook, travel guide and introduction to Botswanan geography and culture.

Thanks to both books I finally got to grips with the various confusingly similar words Batswana, Motswana, Setswana and Tswana. Batswana is the name for the people of Botswana; Motswana the singular form of the same word; Setswana, also Tswana, the name both for the main language of Botswana and the population group speaking this language living in Botswana, South Africa and Namibia.

Botswana, formerly Bechuanaland, gained independence from Britain in 1966. Its capital city is Gaborone, newly established when the country gained independence. Botswana has since grown to become an African success story, relatively prosperous and with a strong tradition of democracy.

It’s a large but sparsely populated country as much of its land area is taken up by the Kalahari desert. Despite being landlocked, Botswana can lay claim to the spectacular Okovango delta, formed where the Okovango river spreads out across a tectonic trough. The water in this inland delta never reaches the sea, being lost through transpiration and evaporation.

On to the breakfast. Deciding what to drink was easy – the first thing Mma Ramotswe and her able assistant Mma Makutsi do on their first morning at work in the Detective Agency is to drink a cup of bush tea, Mma Ramotswe’s favourite, with just a little condensed milk. And they go on to drink bush tea throughout the rest of the book. We followed suit:

The bush in question is of course the Rooibus or Redbush (Latin name Aspalathus linearis), a shrub from the Western Cape of southern Africa whose needle-like leaves turn red once dried in the sun and fermented. The resulting fragrant brew has a slightly medicinal quality, a beautiful red colour and is eminently drinkable with or without milk.

On to the food. Whilst there are plenty of food references in the No 1 Ladies’ Detective Agency series books, I didn’t find a definitive Setswana breakfast. I read with some trepidation about mopane worms, chipolata-sized moth caterpillars preserved by drying in the sun. Fortunately these seem to be eaten as snacks or made into a main-meal stew rather than being eaten for breakfast.

One blogger writing about a trip earlier this year to a “Sons of the Soil” festival in Botswana describes one possible breakfast option:

“On the breakfast menu was chicken necks with fat cakes cooked the very traditional way.”

Fat cakes are Botswana’s answer to the doughnut, a deep-fried yeast-raised wheatflour dough. My fryer needed cleaning and an oil-change before it could be used and I wasn’t sure how to get hold of chicken necks so I decided to focus my efforts on getting hold of some sorghum meal to make the thin soft sorghum porridge, Motogo, another traditional breakfast staple.

Sorghum is relatively unknown here in the UK but is a staple grain crop in large parts of Africa and the Indian subcontinent thanks to its nutritious qualities and ability to withstand drought. It’s known as Mabele in the Setswana language and as Jowar in Gujarati (useful to know if you’re shopping in one of the many ethnic Indian foodstores over here in the UK). I bought myself a distinctly unauthentic pack of American sorghum flour from an Amazon marketplace supplier: 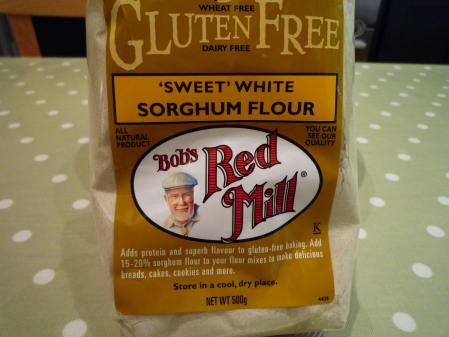 I was a little concerned that my sorghum flour rather than a coarser sorghum meal would not make an acceptable porridge. I needn’t have worried as mixed with water and a little milk and cooked gently over a low heat for 10 minutes or so, the sorghum produced a perfectly acceptable porridge, albeit lacking a little in terms of texture:

You are currently browsing entries tagged with Botswanan food; at The Rhubarb Fool.