Daybreak in Paris last Sunday. The public shame. The disgrace. The furtive attempts to conceal the evidence. The seedy story of Dominique Strauss-Kahn’s New York exploits hits the newsstands perhaps?

No, this was me, rising at dawn to try and dispose of 1kg best quality Tanzanian 75% cocoa solids chocolate, a further kg of unsalted alpine butter, lashings of organic double cream and a generous slug of cognac, the whole lot coalesced into a greasy solidified mass of split ganache which should have graced a celebratory chocolate cake, the centrepiece of my cousin Pierre’s birthday party the night before. I finally found an empty public bin by a bus stop, deposited my sorry double-bagged chocolate mess and jogged away, lightened in load and spirit.

So what was the occasion?

A Saturday Night Fever birthday party to celebrate a Significant Birthday. The cake to match was a scaled down (2 layers rather than 3) version of spectacular chocolate-raspberry wedding cake selected from my new favourite baking book “Sky High: Irresistible Triple Layer Cakes” by Alisa Huntsman and Peter Wynne.

The book is American through and through and completely over the top in terms of the sheer number of generously proportioned and imaginatively filled and frosted celebratory cakes it describes. Other bloggers have raved about it so I just had to get hold of a copy. Apart from the Bittersweet Brandied Ganache débacle, it hasn’t disappointed. 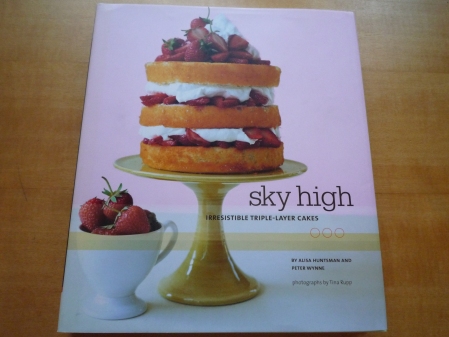 The book’s strengths are the seductiveness of its drop-dead gorgeous full page glossy colour photos, its generosity of spirit and the imagination of its flavour combinations. Where it falls short is perhaps in a lack of precision – for that you have to go to Rose Levy Beranbaum’s Cake Bible, another American classic on my bookshelf.

It all started so well. The choice of a classic American chocolate cake, seemed perfect for a party for a chocoholic into American disco nostalgia. The edible elements needed for the cake were 6 layers of Chocolate Butter Cake, generous quantities of seedless raspberry jam to sandwich the layers together, an unspeakably large quantity of Bittersweet Brandied Ganache to frost and a punnet of ripe raspberries scattered over the top to finish.

I have neither the time nor the space to give the complete recipe here – you’ll have to buy the book for that – the instructions for the full 3 tier wedding cake go on for 6 pages. However I do give the recipe for the Lenôtre chocolate ganache which eventually saved the day I’ve tried it 3 times now (albeit using European ingredients) and it’s been spot-on every time. A ganache to lean on, so to speak.

Here is the end result, finished just minutes before the first guests arrived at 7.30 pm. Not bad given the stresses of the afternoon of which more later…

The baking of the cake itself was fine. I followed the recipe to the letter, eschewing my favourite Green & Black’s cocoa powder in favour of Hershey’s obtained here in the UK via Amazon Marketplace.

This wasn’t just for reasons of American authenticity. The recipe specifies a non-Dutch Process cocoa powder in order to ensure the right chemical reaction with the recipe’s raising agent, bicarbonate of soda, to make the cake rise properly. Reading the Green & Black’s small print, you’ll see that this cocoa powder has been through the so-called Dutch process whereby the beans are treated with an alkaline agent to produce a milder flavour and, counter-intuitively, a darker colour. The Hershey’s stuff is paler but in theory contains more “roasty, caramel-like molecules…and…astringent, bitter, phenolics” (quoting from Harold McGee’s indispensable kitchen reference work On Food and Cooking). 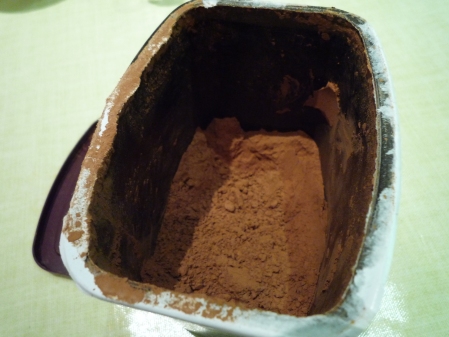 The recipe is not a chocolate sponge made by the familiar creaming method but requires softened butter and buttermilk to be beaten into the sifted dry ingredients before the eggs and more liquid in the form of strong coffee are incorporated into the mixture. I would not attempt this recipe without the help of a Kenwood or Kitchenaid-type mixer as it requires a lot of heavy-duty beating.

After the addition of butter and buttermilk the mixture looks like a moist and friable garden loam:

Once the eggs and coffee were incorporated, it became soft, thick and lusciously silky, like a chocolate version of mayonnaise:

Baked, the cake rose well but not too aggressively. Don’t worry, the dome that forms in the oven settles down once the cake is cooled leaving a firm, glossy and flat cake which holds its shape well, eminently well-suited to the architectural task ahead.

The finished cake was firm, rich, dense and crumbly. It had an intense chocolate flavour pointed up by the addition of cinnamon and coffee in the recipe though neither flavour is perceptible. This is a cake designed for filling and frosting as eaten on its own it would be a tad dry.

The cakes were mixed and baked first thing Friday morning. Once cooled and carefully wrapped and packed, the cake’s 6 layers travelled as hand luggage, sitting obediently beside me on the short Flybe flight to Paris. Cake assembly began in situ at the party venue at about 2.00pm on Saturday afternoon. First the layers were spread with seedless raspberry jam (Tiptree brand), then sandwiched together with each triple layer cake having a slim silver cardboard base: 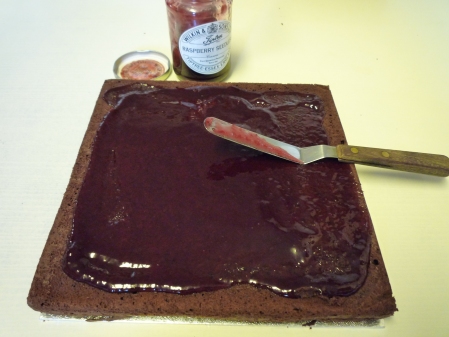 If I were to make this cake again, I would be more generous with the raspberry jam and I would leave the cake to mature overnight as the recipe instructs. The quantity of jam shown in the picture may look generous but is far less than the recipe suggests and when the cake was cut into later that evening, it had practically disappeared. More jam would have made for a moister cake I think as, being self-critical, it was just a little on the dry side (easily remedied on the night by serving it with extra fresh raspberries and a dollop of crème fraîche).

The next potentially tricky step was the positioning of the 4 transparent plastic dowels which supported the top layer. I measured, cut to size and positioned the dowels. This bit of the assembly worked like a dream – a relief as I’d never worked with dowels before. I know you shouldn’t experiment when baking for a special occasion, especially someone else’s special occasion, but I just couldn’t help myself: 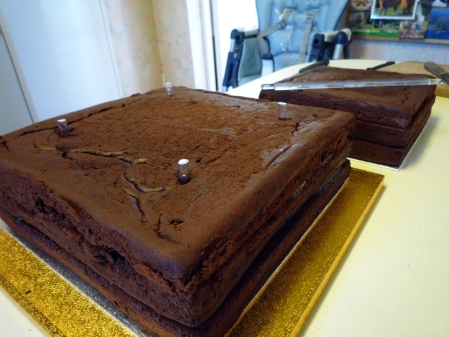 Now for the ganache. How hard could it be to whip up a batch of ganache and slather it on all over the cake? I’d preweighed all the ingredients so it was quick work to set the vast quantities of best quality dark chocolate and unsalted butter (a kilogramme of each no less) to melt over a pan of barely simmering water.

I was patient and careful, never letting the mixture become too warm, not letting a drop of water near it lest it seize up and going easy on the stirring. On the home strait now. All I had to do was whisk in the warmed cream, then the brandy, just like the recipe said and I was home and dry. Blithely, I tipped them in and whisked away. That’s when disaster struck as the previously smooth glossy mix began to separate out into particulates and oil before my very eyes. 30 minutes and frantic whisking and cooling later, I pronounced the mixture officially beyond redemption, tipped it into a big plastic box for subsequent disposal and confessed my error to my slightly alarmed host and his family. The public shame and humiliation!

Having checked Harold McGee subsequently, I think that where I went wrong was in using chocolate with too high a cocoa content – 75% in my case. When liquid is added, the cocoa solids absorb the water releasing the fats out of emulsion and hey presto the mixture splits. His advice is to follow a recipe which sets out precisely the fat contents of the various ingredients and to follow it to the letter. The Sky High recipe was a bit on the sketchy side – ie just bittersweet chocolate, heavy cream and American ingredients are not quite the same as those we can buy in Europe which can make for misunderstandings.

Back to the party. Remembering Corporal Jones’ advice from Dad’s Army (Don’t Panic), using my host’s computer, I quickly retrieved the tried, tested and reassuringly precise ganache recipe I’d learned at the Lenôtre cookery school in Paris over Easter. Next, an emergency dash to the local supermarket for yet more cream and chocolate (just 600g of chocolate this time as 1kg was way too much, even for the most enthusiastic chocoholic) and I was back in business:

I followed the Lenôtre recipe as accurately as I could, though without scales or thermometer to hand I had rely on educated guesswork and prayer. To my immense relief, the ganache behaved itself perfectly and after 20 minutes’ or so cooling, it had reached the perfect consistency for spreading. The first house guests were just arriving at this point so I smiled and pretended to be part of the evening’s entertainment, a sort of cake artist installation.

The final step was piping a bold decorative border of what I can best describe as chocolate blobs to hide the joins between cake and board. Very effective though I say so myself. By the time the cake was served, the blobs had firmed up to become in effect mini chocolate truffles which could be detached and discreetly popped into the mouth while the cake was being sliced and served. Cook’s prerogative!

Cake complete, it was time to enjoy the party with the host rather than the cake the centre of attention – just as it should be. Great party Peter!

With thanks to Philippe from the Lenôtre cookery school in Paris. I scaled this up by a factor of three to use to coat the birthday cake which comprised a 7 inch square stacked onto a 9 inch square.

Heat the cream to 85 degrees C. Break up the chocolate and place into a large heatproof bowl. Pour over the hot cream and leave to stand for 10 minutes. Once the chocolate has melted, stir with a rubber spatula to incorporate the cream into the chocolate. Keep a ball of molten chocolate in the centre whilst incorporating the cream at the edges of the chocolate. Reduce the temperature to 30 degrees C then beat in the butter previously softened and tempered at 22 degrees C.

Cover with cling film and reduce the temperature to 17 degrees C when it will be the right consistency to use.

You are currently browsing entries tagged with chocolate recipes at The Rhubarb Fool.