Red sea fish? I’ll have chips with mine please…

The recent scary news of shark attacks at Sharm el Sheikh reminds me that I’m due to write a sequel to my previous post describing our attempts to find a taste of the real Egypt during a recent package holiday.

That phrase “a taste of the real Egypt” has taken on a gruesome tint following the news of the death of one tourist and the maiming of three others – though they were not Egyptian but respectively German, Ukrainian and Russian. The news reports are big on sensationalism but short on key detail but a bit of delving reveals that the shark attacks all happened in the Middle Garden reef, adjacent to all the 5 star luxury establishments in the resort. We were some 10 miles further south in the mid-range price bracket – I knew there had to be a good reason for trading down…

Scenes like this one (not a brilliant picture I know but you try holding your breath and snapping through the minuscule viewfinder of a dodgy disposable underwater camera) look to be temporarily on hold while the guilty white-tip shark is hunted down. I feel shades of Moby Dick coming on…

Having spent most of our week in the water gazing at the incredible colours of the tropical fish, by the end of the week we decided it was time to eat some. This meant leaving the hotel compound and taking a taxi to the Old Market area of Sharm. This was the location of the first of the July 2005 terrorist attacks (it’s not just sharks you have to worry about here). The Old Market turned out to be a misnomer is it’s neither old nor is there a market there. You will find more marble shopping malls and inside you can get the bazaar feel by visiting one of the spice shops like this one: 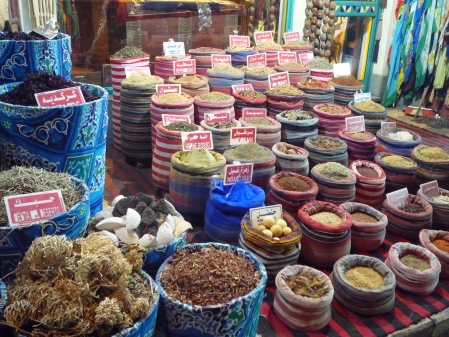 I duly went in and haggled over the price of an odd selection of goodies: Bedouin tea, karkade (dried hibiscus flowers), kurkuma (I’m pretty sure this yellow powder is turmeric), and “black seeds” which appear very frequently on Egyptian bread (nigella also known as kalonji or, confusingly, onion seeds). Here I am clinching the deal after protracted negotiations and tea-drinking.

Transaction complete, our next task was to find somewhere authentic to eat. After asking round during the week and consulting our Lonely Planet guidebook I’d narrowed the choice down to two possibilities. The first was the straightforwardly named Red Sea Fish restaurant whose splendid display is pictured below:

Younger son Arthur decided that fish wasn’t for him this evening so that meant dinner was to be in local Sharm institution El Masrien:

The hotel staff had looked at me oddly when I’d asked if I needed to book here. Walking in it soon became apparent why. It’s more of a working man’s café than a restaurant – spotless formica tables, speedy service, TV in the corner and a short grill-based menu. Prices are cheap, very cheap as local Egyptians eat here and we saw that rare sight in Sharm, an Egyptian woman as, tourists aside, it’s a very male-based society.

We began on familiar territory with hummus, baba ganoush and pita bread (please excuse the random spelling of these Arabic words). All spanking fresh and full of flavour. 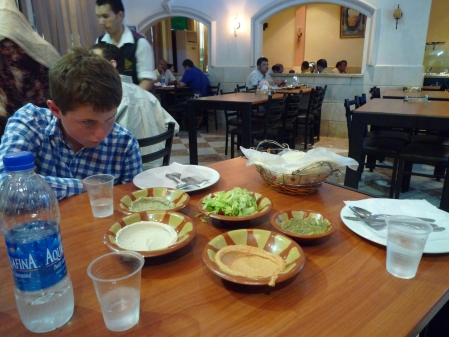 Thinking (wrongly) this wouldn’t be enough, I’d also ordered some grilled stuffed vegetables. This huge platter arrived which we failed to do full justice to:

The boys opted for kebabs as a straightforward choice – a mixture of shish (whole pieces of marinated lamb) and kofte (minced lamb with spices) both grilled over hot coals. These were wolfed down in seconds – I barely got a look in: 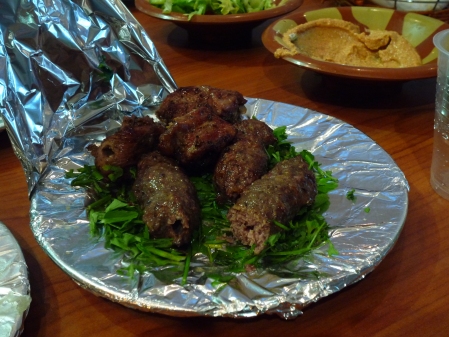 My choice was the more adventurous one of rice-stuffed pigeon. This splendid creature duly arrived allaying my fears of the scrawny feral birds pecking at detritus on the streets of Manchester:

The pigeon was impressive but my abiding memory of that evening will be watching a woman in full burqa delicately eating forkfuls of lamb – one hand would raise the fork to her facial area and at the last minute the other hand would dart up and swiftly swing aside the black veil and the speared morsel would disappear. I was transfixed but far too polite to try and video the performance.

So, next time you feel inclined to brave shark and terrorist attacks and visit Sharm, do consider leaving the gilded cage of your hotel compound and check out what the Old Market has to offer.

Here are my 2 sons George and Arthur wandering down the main drag in Naama Bay, Sharm El Sheikh, looking in vain for a real taste of Egypt. Diving in the Red Sea has been something I’ve hankered after doing since my first scuba attempts in the cold Atlantic waters off Pembroke in Wales in my early 20s. The 2 week half-term break this year meant we had the opportunity to travel a little further afield than usual so I thought why not take the boys snorkelling in the Red Sea?

Sharm El Sheikh (or just Sharm as it’s universally known in the travel industry) is a package holiday Mecca. It processes thousands of foreign tourists from the northern climes of the UK, Russia, Poland and Germany who are jetted and bussed in for a week’s guaranteed sunshine and sent back home a week later without having left the grounds of their all-inclusive resort-style hotels. Astoundingly, many of them don’t even bother to dip a toe into the truly exquisite clear warm waters of the Red Sea, preferring the hotel pools and waterparks.

The Red Sea did not disappoint and the boys took to snorkelling like the proverbial ducks:

But what of the food? Before our trip I had dreams of Bedouin-style charcoal-roasted lamb, aromatic spices and orange-flower water scented sherbets. One of my most-thumbed cookbooks is Claudia Roden’s Book of Middle Eastern Food. Claudia grew up in Egypt and I’ve long been bewitched by her evocative descriptions of the food of her childhood, the ful medames (fava beans), Sephardic Jewish dense orange and almond cakes, salads fragrant with parsley and mint.

You can imagine that the all-inclusive “international buffet” served in the ersatz surroundings of the “Andalusia” restaurant of our hotel, the Dreams Vacation, was a bit of a rude awakening. Remember the Leyton Buzzards’ 1979 hit “Saturday Night Beneath the Plastic Palm Trees”?

Sharing mealtimes with the tattooed classes was quite an experience. The sight of a middle-aged Geordie sporting nothing but a pair of Speedos tucking into his lunch washed down by as much free lager as he could drink is one that will live long in the memory for all the wrong reasons.

Then there were the Russians. We’ve all laughed about Germans bagging all the best poolside spots but over here it’s practically a Russian invasion. The menfolk were securing beach sun loungers at 6.00 in the morning, bikini clad babushkas were throwing themselves into the water with wild abandon, and the imperious way they treated the local staff was nothing less than shocking at times.

The food on offer at the “international buffet” was at first sight not particularly appealing. The chef clearly knew on which side his bread was buttered and tried to please his Russian and Polish customers with his command of Communist Cuisine – a lot of indeterminate grey boiled meats and stodge.

As we became more familiar with the place we searched out some of the better things to eat which surprise surprise were local Egyptian staples. At breakfast time I developed quite a taste for the falafel served with soft fresh pitta, tahina and sour pickles – I know it sounds weird but pickles at breakfast time are appealing in a hot climate, especially after an early morning swim.

At lunchtime the cucumber and yoghurt salad was the star attraction for me, along with gloriously sticky Levantine pastries. The Egyptians clearly have a sweet tooth and can fashion a pudding out of almost any ingredient it seems.

The chef had more up his sleeve: he’d also prepared a branflake pie, unconscious of the irony of turning such a Puritan and unappealing cardboard-like product into a calorie-laden syrupy treat:

The most confusing cross-cultural experience of the week has to be the night we ate in the hotel’s Mexican restaurant. The sensation of sitting in an Egyptian hotel eating Mexican food listening to piped German music (a Beethoven symphony!) surrounded by Russians and Poles was nothing if not bizarre.

So did we ever find a taste of the real Egypt? You’ll have to read the next post to find out…

You are currently browsing entries tagged with Egyptian food at The Rhubarb Fool.