Breakfasts in Brazil are many and various depending on where you are in this vast country. I chose to prepare Açaí na Tigela, a breakfast dish popular on Brazil’s beaches, from Caraivo in the north to Florianópolis in the south as the Brazilian breakfast date coincided with our family beach holiday to Southwold in Suffolk.

OK so both Southwold and Florianópolis are both on the coast but that’s where the similarities end. Southwold is famous for its pastel-coloured beach huts and sedate way-of-life whereas Florianópolis is known as one of Brazil’s hippest cities with “dental floss” bikinis rather than Cath Kidston florals being the beachwear of choice.

Let’s compare and contrast some other features of these two towns/cities :

I needed more for this breakfast than just the Açaí na Tigela. Brazilians love their coffee so this was a must, made from Brazilian beans, naturally. Finally, rather than ordinary white rolls I made a batch of cheese rolls, Pão de queijo, which are made from tapioca starch so perfect for anyone on a gluten-free diet.

Back to the Açaí na Tigela, literally “bowl of açai berries”. This turns out to be a smoothie the main ingredients of which are super-trendy (and, over here, superexpensive) açai berries and banana, topped with granola and, optionally, more banana slices. I read about it here and instantly wanted to try one.

The smoothie was quickly whizzed up with a stick blender and I added a spoonful each of ginseng, guarana and maca powders to the whole fruit and juices to give it an extra Brazilian lift. It certainly gave my 90 year old father-in-law Lawrie an extra gear in his wheelchair travels that day. 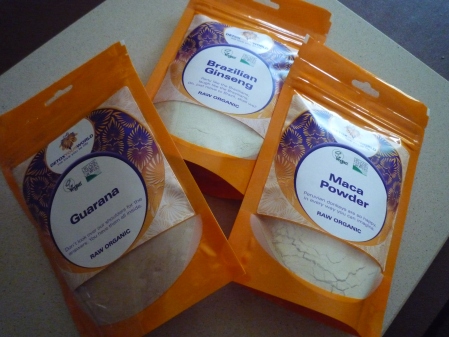 I poured the smoothie into individual serving bowls:

and topped it with a spoonful of homemade granola:

Yes of course you can buy granola readily these days but it’s quite satisfying to make your own now and again. I discovered this particular granola at a friend’s house a couple of years ago, asked for the recipe and was told I already had it as it’s in Nigella Lawson’s “Feast”. She in turn attributes the recipe to Andy Rolleri of The Pantry deli in Fairfield, Connecticut. It’s a cinch to make – the only remotely tricky bits are making sure you’ve bought all the items on the lengthy ingredients list and getting the correct bake – not underdone and not burnt. A long and slow toasting is what you’re aiming for, not a quick char. Be warned, it’s addictive stuff and you’ll find yourself eating it by the handful rather than rationing it just for breakfast.

I found my pão de queijo recipe on this website in 2008 but can’t remember now why I was trying to find a Brazilian cheese bread recipe back then. The list of ingredients sounds surprising – what, tapioca, the stuff that school dinner nightmares are made of? Yes , that’s right, but look for tapioca flour rather than the tapioca processed to make school dinner puddings. You can find it at specialist health food stores – mine came from Chorlton’s fantastic Unicorn deli. It’s a starch made from the cassava root and you might find it sold as manioc flour – all rather confusing. I have once made a batch using pudding tapioca which I tried to grind down to a flour in my liquidiser. It didn’t work as the stuff is rock hard. I made the recipe with it anyway and it was OK but there were occasional lumps, so do make every effort to find the right flour.

The recipe requires you to make a choux-type paste by throwing the tapioca starch into boiling water and then beating like crazy to make a smooth paste. Beaten eggs are then added before the soft dough is blobbed onto lined trays for baking.

Miraculously, these blobby balls transform when baked into light and fluffy rolls:

Adapted from a recipe in Nigella Lawson’s “Feast”.

Mix everything except the raisins together very well in a large mixing bowl using 2 curved spatulas.

Spread the mixture out on 2 baking tins and bake at 170 degrees C for about 40 minutes. Keep an eye on the mixture and turn it over with a big spoon after about 20 minutes. It may need longer than 40 minutes in total. You need to achieve an even golden colour without overbaking or burning. Once cool, mix with the raisins and store in an airtight tin.

Bring to a boil in a big pan the water, milk, oil and salt. Remove the pan from the heat and add the tapioca starch. Mix well with a wooden spoon and allow to cool down. Put the mixture in a bowl, add the eggs and knead well. Add the grated cheese and keep kneading until the dough is smooth.

Roll into small balls (each ball requiring 1 tbsp mixture). Oil rather than flour your hands.

Place the balls on a baking tray lined with baking paper. Bake at 180 degrees C for about 20 minutes or until golden brown.

Make your own mountain bars

March heralds the arrival of spring, and most importantly the ski-touring season.  I have a trip planned to the Vanoise in France mid month and Tim to Glarus in Switzerland a week later, so time to make a batch of mountain bars to provide energy on the hill.

I found this recipe a few years ago on the University of Oregon Library Staff Association website. They call it “Johnny Crunch” and recommend it as the ideal food for skiing, hiking, in fact any kind of strenuous outdoor activity.

Here’s a bar shot on location at the Kinder Downfall in the Peak District last autumn.

The bars taste good, are high in calories, are compact for slipping into your pocket, they don’t freeze to a tooth-shattering lump at low temperatures, nor do they melt at warmer ones. Oh, and there’s the added bonus that you can rub the almond oil they contain into your skin for an inpromptu handcream!

Once you’ve assembled the ingredients, it’s merely a case of mixing them up:

…then pressing into a suitably sized tin:

Thanks to the University of Oregon Library Staff Association for this recipe. The quantities are all in American cups (US cup is 8 fl oz). Helpfully a standard 370g jar of honey, peanut butter etc equates approximately to a US cup so the measurements can be done by eye which makes life easier with dense sticky ingredients.

Most of the ingredients can be picked up easily at your local supermarket. Try a health food shop for the almond butter and barley malt/date syrup.

Note for those on gluten free diets. As far as I’m aware, the only gluten-containing ingredient in this recipe is the barley malt syrup. If you use date syrup instead, you have the perfect high energy gluten free snack. I skied with aspirant (now fully qualified) mountain guide Mark Thomas last year. Mark doesn’t tolerate gluten which makes life very difficult in the mountains where much of the staple food on offer (bread, pasta, cake etc) contains gluten. This one’s for you Mark!

Mix all the ingredients together in a large bowl with a wooden spoon. The mixture should be very firm and sticky. If it seems not firm enough, add more rice crispies and sesame seeds to give the correct consistency. Press into a 9 by 9 inch tin (or rectangular tin of similar area). DO NOT BAKE. Refrigerate overnight then cut into small squares and wrap individually in cling film. Makes 25-30 squares. Store in fridge or better still freezer if not using straightaway.

You are currently browsing entries tagged with gluten free baking at The Rhubarb Fool.