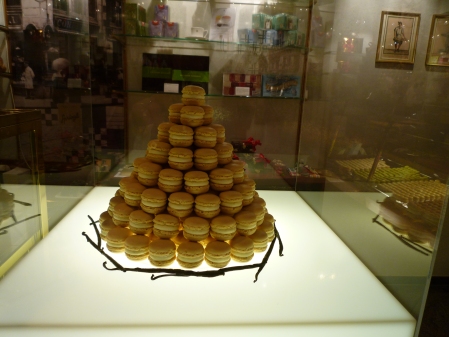 We’re still all going crazy for dainty pastel-coloured Parisian macarons. Meanwhile the Swiss firm of Sprüngli has quietly been making its own version going under the odd name of Luxemburgerli (little Luxemburgers) for some years now.

Above and below are displays at the very conveniently located Zürich airport branch of Sprüngli where we passed through last week en route to our half term ski holiday:

Pictured are a pyramid of vanilla Luxemburgerli plus trays of cinnamon (Zimt) and raspberry (Himbeer) flavours – I forgot to check what flavour the dramatic black ones on the left were. Dare I say it, these are daintier and more delicate even than the Parisian macaron, perfect for nibbling with coffee on the train journey to Luzern and beyond:

How do they come to be made in Zürich and how did they come by their odd name? According to the Sprüngli website www.spruengli.com the recipe originated at the Confiserie Namur in Luxembourg, a business with which the Sprüngli family had close ties. Patissiers from Zürich would go and work in the Duchy of Luxembourg and vice versa. It was in the late 1950s that one of the Luxembourg trainees started producing macarons in Zürich and they were given the nickname Luxemburgerli (the Swiss are very fond of the diminutive) in his honour.

So maybe the current trend for Parisian macarons is more than a fad and is here to stay?

You are currently browsing entries tagged with Luxemburgerli at The Rhubarb Fool.