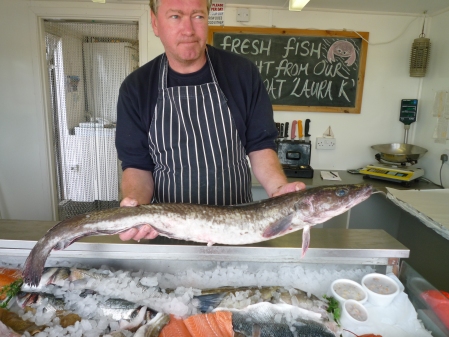 The weird fish in question is a ling, a member of the cod family. Rick Stein writes about ling in his “Taste of the Sea” like this:

“Ling is one of those underrated fish which, in addition to being reasonably flavoured, is also firm in texture – a cheap version of monkfish, if you like. It is an extraordinary looking fish which could easily be mistaken for an eel, so long and sinuous is its appearance.”

He’s certainly right about how it looks as the picture above, snapped at Samantha K’s fish shack on the harbour at Southwold, shows.

Over the years we’ve gently fallen in to the routine established by my husband’s family of joining a large family party at Southwold on the Suffolk coast. We eat out some of the time but for the most part take turns to cook an evening meal served on the big kitchen table.

Last Thursday, it was my turn to cook so, being by the seaside, I decided to cook fish. One of the pleasures of a holiday in Southwold is wandering along the Blackshore Harbour waterfront to buy the freshest possible fish without guilt – it’s caught sustainably on lines by small day boats which supply the harbourside shacks in the most direct way possible.

You have a choice of 3 fish shacks to buy from. My favourite is the smallest and simplest of the lot, Samantha K’s: 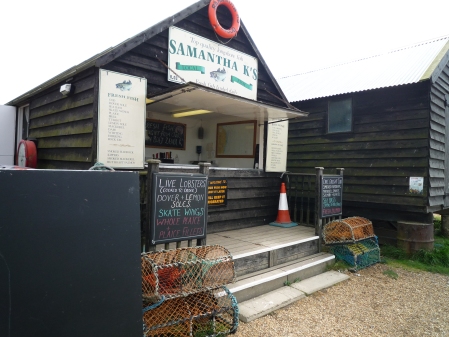 The Sole Bay Fish Company, a pebble’s throw away is good too and clearly has a superior PR machine. Blimey, you can even find Jasper Conran extolling its virtues in a Guardian Online article… 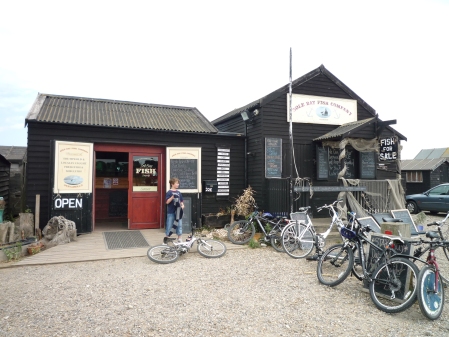 Having looked at what was on offer, I couldn’t resist choosing the impressive and rather scary whole ling. All mine for £24. The fish guy kindly filleted the monster for me while Tim and I slipped off to the Harbour Tearooms for an early morning coffee and toasted teacake.

I chose a simple Indian-inspired recipe to show off the fish at its best – the fish fillets are briefly marinaded in lemon juice plus added aromatics, then coated in lots of chopped fresh herbs before being baked for 20 minutes in a hot oven. 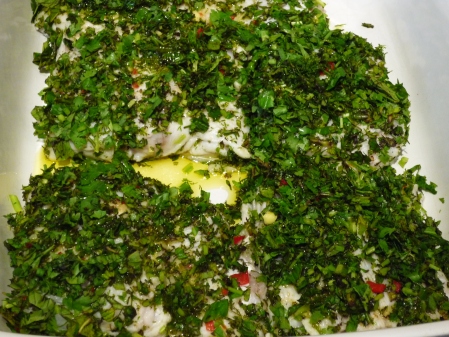 I included wild fennel which I found growing wild on the beach in my fresh herb mix for a truly local flavour: 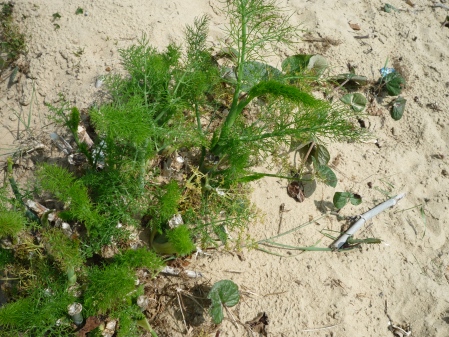 It’s a very adaptable recipe which would work well with all sorts of white fish and the half hour marinading period gives the cook a perfect excuse to slip off to the local pub for a sundowner.

Cooking with fish this fresh was a real revelation. The raw fillets on the board didn’t smell fishy at all, there was just the faintest seaweedy smell of the sea. The cooked fish flaked easily, was an amazing pearly white and the taste was clean, fresh and very summery. So yes, Rick, I agree with you about the fish being underrated and reasonably flavoured but beg to differ on its texture being similar to monkfish – it’s much closer to the flaky texture of cod. A cheaper version of monkfish really would have been too good to be true.

I served the fish with spiced basmati rice, an Indian style grated carrot salad, cucumber raita and some simply steamed greens. A shameless attempt to persuade some of the curry fans in our family to give fresh fish a try – it seems to have worked: 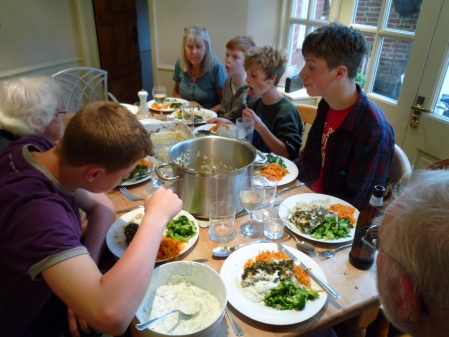 Recipe for fish baked with herbs

I’ve adapted this recipe from one given in Thane Prince’s “Summer Cook”, a slim paperback volume perfect for slipping into your bag if you’re heading off on a self-catering holiday. Her recipe is called Pudina Macchi and she attributes it to Indian chef Satish Arora. Pudina is the Hindi word for mint, a key ingredient in this summery, fresh tasting and straightforward dish.

4 square chunky pieces of white fish fillet, one per person, each weighing about 6 oz so approx one and a half pounds in total. I left the skin on to help the fish keep its shape. I used ling but cod, haddock or any similar variety would work fine in this adaptable recipe
2 cloves garlic, peeled and roughly chopped
1 teaspoon ground coriander
1 fresh red medium hot chilli deseeded and roughly chopped (adjust quantity of chilli to suit your group’s capacity for heat)
juice of 1 lemon
small bunch each of mint, coriander and an aniseedy herb such as fennel or dill
2 tablespoons light olive oil

In a shallow glazed ceramic dish which which will hold the fish fillets snugly without overlapping to much mix together the garlic, coriander, chilli and lemon juice to form a marinade. Place the fish in the marinade flesh side down, skin side up, cover with cling film, refrigerate and leave in the marinade for betweeh 30 minutes and 1 hour. Don’t leave it longer than this as the lemon juice “cooks” the fish and you’ll end up with a ceviche on your hands rather than fish ready for cooking.

Meanwhile, prepare the herbs. Remove the leaves from the mint stalks and chop roughly. The coriander and fennel/dill can be chopped just as they are as their stems are tender. Mix together the chopped herbs.

Once the marinading period is over, remove the fish from the marinade and discard the liquid. Press the flesh side of the fish into the herb mixture aiming for a really thick generous herb coating. Place the fish skin side down, herb side up in a shallow baking dish.

Drizzle the light olive oil over the fish and bake in a preheated oven at 200 degrees C for approximately 20 minutes. Test the fish for doneness as it approaches the end of its cooking time by pressing with the point of sharp knife feeling for the difference in resistance between just cooked and slightly underdone fish.

You are currently browsing entries tagged with Summer Cook at The Rhubarb Fool.