We’ve been celebrating New Year’s Eve with two other families for a number of years now – in fact over a pre-dinner glass of champagne we worked out that 2010/2011 would be unbelievably our twelfth such celebration.

This year it fell to Shelley and Neal to host the event at their home in North London and the chosen theme was “Tour de France”. This left the dress code wide open and host Neal led the way by sporting slinky black and white lycra…

Fortunately Shelley had decided not to continue in this vein by serving up carbohydrate gels, bananas and a cocktail of hard drugs. We began in a very civilised manner with the silkiest Côte Atlantique smoked salmon mousse canapés to accompany our Laurent Perrier champagne:

Our first course looked to the mountains for inspiration – charcuterie from the Alps accompanied by rustic pain de campagne. The delicious ham was snaffled up too quickly for me to take a photo but here’s the batch of pain de campagne I made earlier – using the pain au levain recipe learned on my School of Artisan food baking course in October 2010.

The race now headed south with bouillabaisse à la marseillaise served en verrine. This was the course Shelley had tasked me with preparing so I’m able to give the recipe below. Verrines (small glass containers for serving food) are all the rage in France so we just had to give them a try.

We continued our tour clockwise with the next stage ending in the Aveyron département of Southern France, home to the limestone caves where Roquefort cheese is matured. Our next course was a crunchy salade d’endive, noix et roquefort prepared by Shelley using a Raymond Blanc recipe: 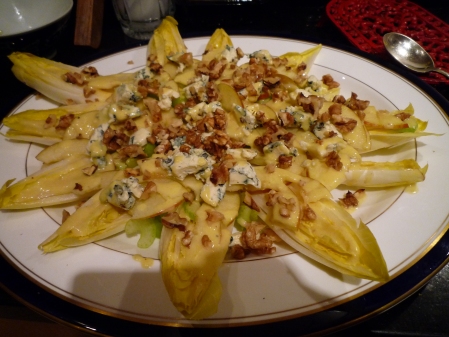 It was then onwards and upwards to red wine country with Shelley’s deeply savoury Coq au vin, again using a Raymond Blanc recipe: 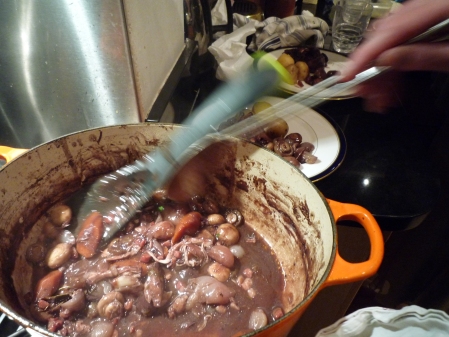 Next up was France’s favourite English cheese, le stilton – yes I know we departed from our theme somewhat but stilton this good (Colston Bassett from Neal’s Yard (no relation) Dairy) is too good not to serve at a special dinner. And of course the 2007 prologue was in London wasn’t it?

Next we recalled France’s Atlantic coast islands (Belle Île, the Archipel des Glénans and the like) with Îles flottantes, façon Maman Blanc – yes you guessed it, a Raymond Blanc favourite. Janet prepared this technically demanding course involving poached meringue and egg custard thickened without the aid of stabilising cornflour. She also had to handle deftly the caramelised sugar final decoration at close to midnight:

The final stage is always in Paris around the Arc de Triomphe which we recalled in culinary fashion with a dainty plateful of pistachio flavoured macarons parisiens :

As we nibbled on a macaroon at midnight we heard he patter of not-so-tiny feet as 8 children celebrated a real midnight feast – a landmark occasion as they’ve been fast asleep by midnight in previous years.

Happy new year to all and huge thanks to our generous hosts Neal and Shelley once again for a magnificent meal. Now we’re off the tour it’s on to the wagon for my annual no alcohol January semi-detox. Fantasising already about what my first glass of wine will be in February…

To conclude here’s the recipe for bouillabaisse – I know it’s lengthy but it’s really not as complex as it looks.

I used as my starting point the fish soup and rouille recipes from “Mastering the Art of French Cooking” by Julia Child, Simone Beck and Louisette Bertholle and tweaked them to turn them into a refined version of bouillabaisse suitable for serving as part of a multi-course dinner.

Using the kilner jars is not merely a modish presentation but is an easy and stress-free way of gently cooking the pieces of fish in the broth, sealing in all the flavours and ensuring that the delicate fish like bass does not break up when cooked and served.

These ingredients will fill 8 small (12 oz) kilner jars and leave you with plenty of fish soup left over which sets to a gelatinous firmness and freezes well.

Ingredients for the fish soup base

4 oz chopped onions
3 oz chopped leek
2 oz chopped celery (my addition, no celery in Julia Child recipe)
1/4 pint olive oil
4 cloves mashed garlic
1 lb ripe tomatoes roughly chopped or 1 tin tomatoes roughly chopped (I used a standard tin of tomatoes – 14 oz/400g including all the juice whereas Julia Child recipe suggests draining the tomatoes)
3 and 1/2 pints water
6 parsley sprigs
1 bay leaf
1/2 teaspoon thyme or basil (I used fresh thyme leaves stripped from the stalk)
1/8 teaspoon fennel (not sure whether original recipe wants dried fennel, fennel seeds – I used a few leaves of fresh tarragon for a similar aniseedy hit)
A 2 inch piece of orange peel (I used a vegetable peeler to remove this)
1/8 teaspoon pepper
1 tablespoon salt (I added this gradually to taste rather than all at once as salt is a personal thing)
3 to 4 lb lean fish heads, bones and trimmings, raw shellfish remains, lean fish or frozen raw fish. 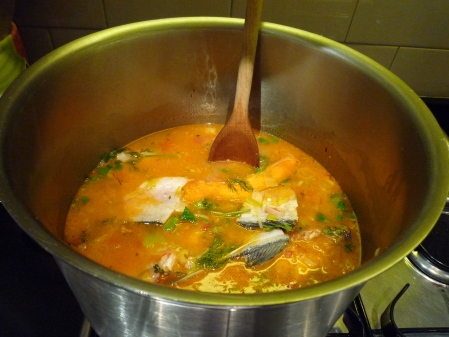 Julia Child, catering for her US and Northern European readership suggests choosing fish from the following list: cod, conger or sea eel, gurnard, haddock, hake or whiting, halibut, John Dory, lemon sole, perch, plaice, pollack, coalfish or saithe, red or grey mullet, rock or sea bass, sea bream, sea devil, frogfish or angler, freshwater trout, sea trout, turbot, weever, wrasse, shellfish – scallops, mussels, crab, lobster. Many will tell you that an authentic bouillabaisse can’t be made without rascasse – by all means add this to the list if you can get hold of it but providing you include plenty of lean bony fish in the soup it will turn out just fine.

Making this recipe in the dark period (in food distribution terms) between Christmas and New Year all that was available at my local fishmonger was sea bass and sea bream bones heads and trimmings. Despite the lack of variety of fish, the soup was nevertheless suitably flavoursome – it need not be an enormous production and can be varied according to what you have. It’s probably best to avoid oily fish such as salmon and mackerel though as these won’t give the right flavour to the soup.

In a large saucepan, cook the onions, leeks and celery slowly in the olive oil for 5 minutes or untll almost tender but not browned. Stir in the garlic and tomatoes. Raise heat to moderate and cook 5 minutes more. Add the water, herbs, seasonings and fish to the pan and cook uncovered at a moderate boil for 30 to 40 minutes.

The Julia Child recipe specifies straining the soup at this point, pressing the juice out of the ingredients. I wanted a slightly thickened soup but without resorting to flour so I lifted out the fish bones and heads with a slotted spoon and gave the soup a blast with a stick blender to liquidise partially the soup vegetables. I then strained the resulting soup through a coarse sieve, pressing it through as per the original recipe.

Correct seasoning adding a bit more saffron if you feel it necessary.

Soup can be cooled at this stage until you are ready to complete the bouillabaisse. I froze my soup and took it down to London with me and defrosted it a couple of days later to turn it into my finished dish.

Additional ingredients to turn the soup into bouillabaisse 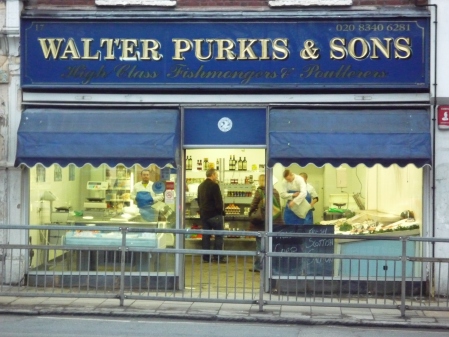 6 fish fillets (I used 2 sea bass and 1 sea bream – again all that was available in the intra Christmas and New Year dark period) cut on the diagonal into generous bite-sized pieces
8 giant raw prawns, peeled except for tail and deveined
Sufficient mussels to allow 3 per serving once any duds discarded – scrubbed and debearded
a tablespoon each of chopped onion and celery plus generous glass of white wine for steaming the mussels
generous pinch saffron strands
zest of 1 orange
tablespoon shredded basil
tablespoon pernod

Set the kilner jars into a deep roasting tin. Divide the fish fillet pieces evenly between the jars and drop in 1 giant prawn per jar, tail pointing upwards for easy removal. Ladle in reheated fish stock to cover. Season each jar with a few saffron strands, a couple of drops of pernod and a couple of shreds of orange zest and seal the kilner jars. Pour boiling water from the kettle into the roasting tin. The jars should be at least half covered. Put the roasting tin into an oven preheated to 125 degrees C and bake for 15-20 minutes. 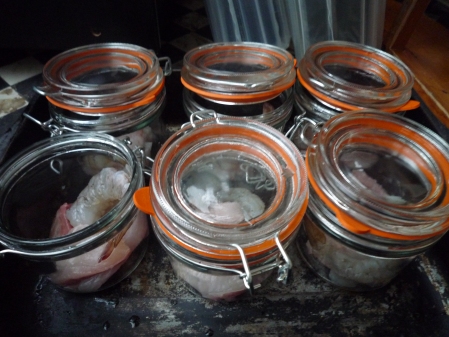 Meanwhile, steam the mussels for a few minutes in a lidded sauté pan or large saucepan with the chopped onion and celery and glass of white wine until they open. Discard any that do not open. Set aside until you are ready to serve.

Remove the kilner jars from the oven. Using rubber gloves or similar to protect your hands from the heat remove each jar from the water bath roasting tin, flip open the lid and drop in 3 cooked mussels in their shell. Half close lid but do not reseal and place the hot jar on an individual serving plate. Place 2 baked bread croutons onto each plate and serve.

Pass the bowl of rouille separately. Diners can spread the rouille on the croutons and dip into the soup and/or drop a spoonful of rouille directly into their soup once it’s half eaten to enrich the remaining broth.

As this was a party, I decorated my plates with seashells and a few fronds of fennel arranged artfully to look like strands of seaweed on the shore…

Ingredients for the red pepper and garlic sauce – rouille

For about 1/2 pint sauce 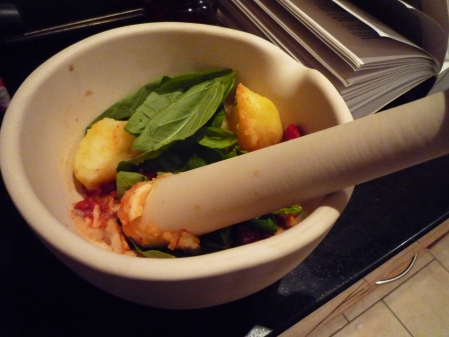 1 oz chopped red pepper simmered for several minutes in salted water and drained or tinned pimento
(these days one might bake a red pepper until charred and remove the skin – I cheated as time was short on New Year’s Eve and used a couple of pieces of chargrilled red pepper preserved in oil from a jar)
A small chilli pepper boiled until tender, or drops of Tabasco sauce
1 peeled medium potato cooked in the soup
4 cloves mashed garlic
1 teaspoon chopped basil, thyme or savory
4-6 tablespoons fruity olive oil
Salt and pepper

Pound all the ingredients in a large pestle and mortar for several minutes to form a very smooth, sticky paste. I found it difficult to achieve a smooth paste so went with a slightly rough, rustic paste which was fine. I avoided using a food processor as this would turn the potato into a gloopy paste.

Drop by drop, pound or beat in the olive oil as for making a mayonnaise. Season to taste.

If liked, just before serving, beat in drop by drop 2-3 tablespoons hot fish soup before decanting sauce into serving bowl or sauceboat.

You are currently browsing entries tagged with Walter Purkis & Sons at The Rhubarb Fool.