Eating in and around St Peter Port: Bon Port, Auberge and Boathouse

A quick round-up of 3 places to eat in and around St Peter Port.

We were staying at the fantastically situated Bon Port hotel on Guernsey’s rocky southern coast perched on a cliff-top overlooking Moulin Huet bay and the quaintly named Peastacks rocks. 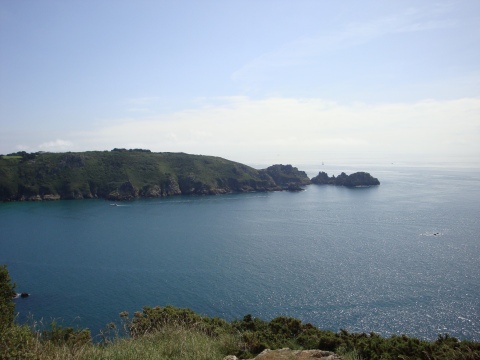 The hotel trades mainly on its near-perfect location but food served in the light and airy dining room doesn’t let the side down.  For dinner you can choose between the Guernsey Produce menu – 3 courses for a very reasonable £18.95, or the à la carte bistro menu.   I chose the Guernsey Produce menu opting for crab salad, baked skate and selection of Guernsey cheeses.  Both the crab and skate were fresh and light, carefully seasoned and served, just what you feel like eating during the summer.  The cheese selection was was well-balanced and interesting – one soft goat, one mild cow’s milk and one lightly smoked cheese.

The next day, out on my own and needing a quick lunch before heading into St Peter Port to meet the rest of the family I stumbled across the rather swanky Auberge on the coastal path.  I was expecting to be served a sandwich in a beach café but as I walked into this smart modern restaurant, all blond wood, glass, amazing sea views and beautiful people, I realised that this was a rather different kind of establishment.  Alone, dressed in shorts and trainers and sporting a rucksack I wasn’t really in the market for an up-market lunch and half expected to be shown the door.  Despite my scruffy appearance, the waitress was charming and offered me soup, bread and coffee as a speedy lunch choice.  The soup was green pea – simple but well made  and seasoned with a perfect velvety texture and vibrant green colour.  Coffee came with home-made petit fours.  I decided that this was definitely somewhere worth a proper visit in the future and have subsequently discovered that the Auberge is one of just a handful of Channel Islands’ entries in the Good Food Guide.

No photos of the Auberge itself or its immediate environs but this is a picture taken at St  Martin’s Point just a few minutes’ walk away: 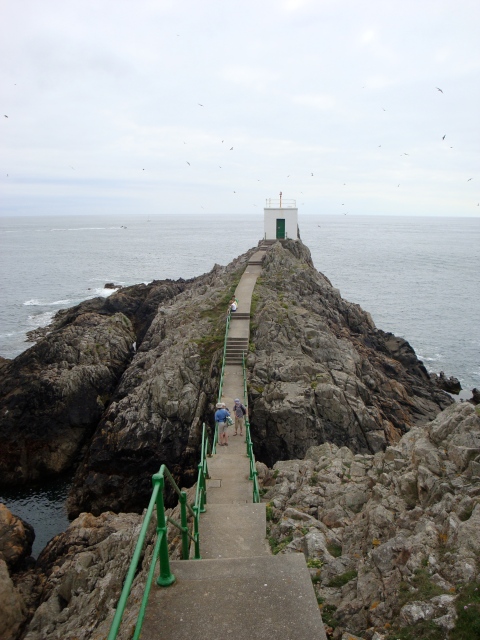 Final stop is the Boat House, a bustling establishment right on the harbour in St Peter Port itself.  This is the view over to Castle Cornet from one of the outside tables: 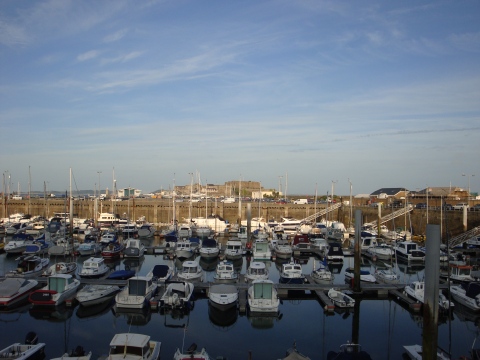 The place is slickly run by an efficient young Frenchman in a crisp blue and white striped shirt marshalling his team of mainly Eastern European waitresses.  The food is simple – Breton type buckwheat galettes with the usual fillings (permutations on cheese, ham and egg), seafood dishes.  I chose scallops wrapped in bacon whereas Tim and boys each chose galettes.  The food arrived promptly and was competently cooked.  I’ve since read some terrible reviews of the place on TripAdvisor but I can honestly say that we had a pleasant and efficiently served meal.

You are currently reading Eating in and around St Peter Port: Bon Port, Auberge and Boathouse at The Rhubarb Fool.