Sark is a mysterious and rather magical island.  If Herm with its sparkling turquoise sea has a rather jolly Kirrin Bay feel, then Sark is just a shade darker with its rocky cliffs and inky blue waters hinting at pirates and smugglers. 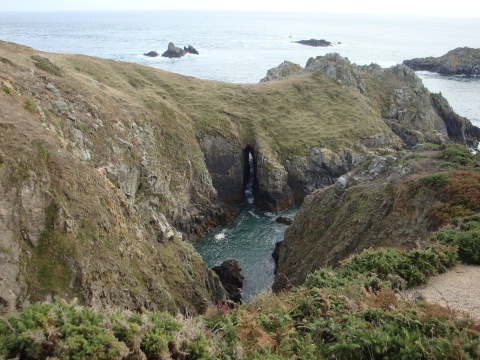 Sark famously has no motorised transport except for the ubiquitous tractor.  Like everyone else, we hired bikes at Avenue Cycle Hire on Sark’s main drag.  It has a wild west frontier town feel with white clapboard shops and houses lining the dusty Avenue.

15 minutes later we were crossing the Coupeé, the precipitous strip of cliff which separates Sark from the almost separate island of Little Sark.  The road signs wisely tell you to dismount and walk across and you would be rash to ignore them.

Back on our bikes and in another 5 minutes (Sark is only 3 miles long) we turned into the yard of La Sablonnerie, a most inviting looking small hotel, its white rendered walls gleaming in the late afternoon sunshine:

We took a look at the inviting looking menu displayed on the board outside and made a mental note to choose the lobster: 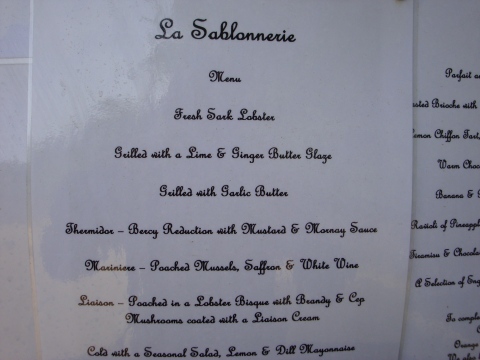 We settled in to our room – in fact not just a room but a whole cottage just down the road, perfect for the four of us.  After exploring the garden we unpacked, showered and headed back to La Sablonnerie for dinner.  Apéritifs are served in the cosy bar and owner the effusive Elizabeth La Perrée was playing the part of the perfect hostess, chatting to each group of guests and keeping the team of handsome young gap-year waiters on their toes.  From the snatches of conversation floating through the kitchen hatch I would guess that the kitchen staff are French whereas the waiters are a slightly more multicultural bunch from Austria, France and England.

Both Tim and I chose the grilled Sark lobster with lime and ginger butter – an inspired combination.  We felt very much at home in the cosy dining room with its various nooks and crannies.

Breakfast the next morning promised much but didn’t quite live up to the standard set the previous evening.  Elizabeth La Perrée was not on duty that morning and the staff sat back a little as a result.  My porridge was a little undercooked, almost muesli and I had to ask for the Sark cream and brown sugar listed on the breakfast menu.  The waiter seemed equally bewildered by an order for smoked salmon and scrambled eggs though that too was plainly listed on the menu.  Neither the bread nor the marmalade were home-made which would have been a classy touch – after all what else is there to do in Sark during the winter other than make marmalade?

After a day spent exploring just a fraction of Sark’s coastline – it may only be 3 miles long but the coastal path going up and down rocky cliffs and into tiny bays and inlets is many miles long – we had built up an appetite for dinner.  Local mackerel was my more frugal choice for this evening – perfectly fresh and delicious.  I am not usually a pudding person, even less a chocaholic but my choice of chocolate crème brûlée was to die for.  Just the right-sized portion in a tiny white porcelain ramekin, dense, creamy, chocolatey with a wafer thin caramel crust.  Sark is famous for its cream as well as its lobster and the placid Guernsey cows who produce it are happy to be photographed.

After breakfast, we left in style in a horse-drawn carriage waved-off by Elizabeth and her staff.  It felt like having spent a rather splendid weekend away with a favourite aunt.  That is until the bill arrives…

You are currently reading Two days on Sark at La Sablonnerie at The Rhubarb Fool.