Hmm this one proved a challenge.  Tiny Andorra, only 180 square miles in land area is just a little smaller than the Isle of Man (in turn 1/3 of the size of Hertfordshire) and has a population of 70,000, about the same of my home town of Altrincham.  It is located in the Pyrenées, squeezed in between France and Spain and is mainly rugged and mountainous in character – no part of the country lies below 3,000 ft or 900m – like living permanently on the summit of Helvellyn.

Andorra, known for cheap skiing holidays, duty free booze and a dodgy football team that even England can beat, is essentially Catalan in culture.  Its food, from what I can glean, is rustic and hearty reflecting the life its mountain people lead (or used to lead before the influx of Irish skiers looking for a bargain).

The recipe for Trinxat follows, from a handy little website www.europeancuisines.com.  I’ve tweaked the recipe a little to simplify the bacon fat rendering and cabbage cookery suggestions – boiling the cabbage whole for 45 minutes before chopping it sounded neither sensible nor pleasant. 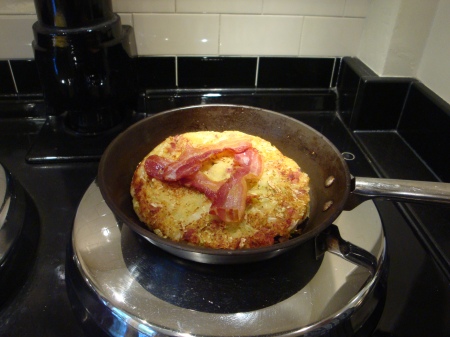 Recipe for Trinxat Andorran cabbage and potato cake with bacon

Enough for one generous potato and cabbage cake in an 8-10 inch diameter frying pan.  I used my trusty non-stick Meyer Anolon pan (8 inch diameter at the base flaring to 10 inches diameter) which is good for pancakes and omelettes of all kinds

Crisply fried or grilled rashers of bacon to serve

Boil the potatoes and mash using a food-mill for a lump-free mash.  Season but add no butter or anything else to it at this stage.

Steam the shredded cabbage for 5 minutes until just cooked.

Mix together the cabbage and potatoes.  Taste and season again.

Fry the lardons gently in the olive oil for 5 minutes or so until the fat is rendered and the lardons begin to turn golden-brown at the edges.  Throw in the garlic and cook for a couple of minutes more.  Add the cabbage and potato mixture, stir to distribute lardons and garlic then flatten into a 1/2 inch thick cake.  Cook over a moderate heat on the hob until a crust has formed (5-10 minutes).  Invert a large plate over the frying pan and carefully flip the cake over and slide it back into the pan.  I wear oven gloves to do this.  Cook for a further 5-10 minutes until the second side is crusty and browned.

Serve with crisply fried or grilled bacon rashers.  A poached egg or two would be a good addition if not entirely authentically Andorran.

You are currently reading Mountain breakfast from Andorra at The Rhubarb Fool.