We are a thoroughly English family living in Manchester but nevertheless have celebrated Thanksgiving for the last four years.  This is down to my friend Lorilee who comes from West Coast of the US but now lives over here.  Sitting in her kitchen as she was preparing for her annual family celebration there was a wonderful bronze turkey on the table ready for stuffing, and delicious smells of cranberries and pumpkin pie spice wafting through the house.  I was seduced and we’ve been doing our own Thanksgiving ever since.

It’s a great way to celebrate the beginning of advent and to get together with family and friends that you won’t see on Christmas Day itself.  For us, it’s free of the weight of expectation and tradition that comes with Christmas, a blank canvas which we’ve made our own.

This year, we invited in-laws Monica and Lawrie over, plus son Arthur’s schoolfriend Rahin.  We made a bit of an effort to smarten up the house and even went so far as to hang corncobs from the door to welcome guests: 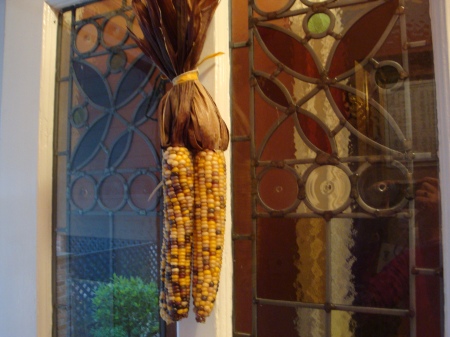 The main event was of course a wonderful bronze turkey from local supplier the Cheshire Smokehouse together with cranberry and cornbread stuffing. The stuffing is a pleasure to make, wonderful colours and smells from both the cranberries gently cooked with orange: 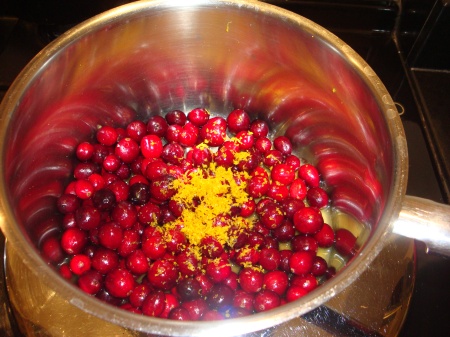 and from the golden cornbread:

Here is the stuffed turkey being ritually weighed on my trusty Avery Berkel scales.  This set of scales has a bit of history behind it having been sold to me some years ago by the Hon Rupert Soames, grandson of Winston Churchill.  Rupert was running a division of the the Avery business in Smethwick and I was visiting from head office and bought some of his old stock.

The scales have since become part of the family – both my two boys as babies were regularly weighed in them and they are now used for weighing ceremonial roasts.

And here is the finished turkey: 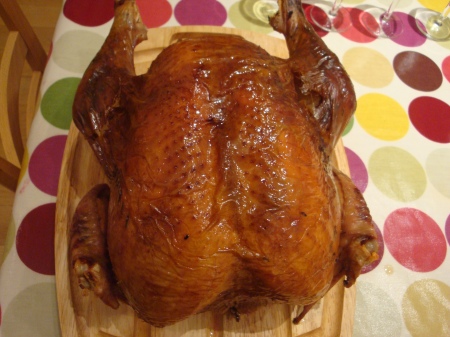 I used to have terrible trouble with turkey but have since discovered the method recommended by Leith’s Cookery Bible which is to drape over the turkey before it goes into the oven an enormous square of folded muslin soaked in an unfeasible quantity of melted butter.  This combined with a digital meat thermometer inserted into the thigh of the bird seems to do the trick.  My thermometer tells me turkey is cooked when its internal temperature reaches 82 degrees C; I find that I need to remove the bird from the oven when it reaches just 73 degrees C as the heat carries on transferring through the meat for a good 20 to 30 minutes afterwards.

With the turkey I served, as well as the aforementioned stuffing, cranberry sauce, gravy, roast winter vegetables and a dish of sweet potatoes topped with toasted marshmallows – improbably sweet and weird but nevertheless good.

Afterwards, instead of the more usual pumpkin or pecan pies, I served crema catalana, the Spanish orange and cinnamon scented version of crème brûlée together with a dish of sliced oranges in orange juice flavoured with grated lemon peel.  I know this Spanish element is from the wrong continent entirely but somehow the colours of the crema catalanas, burnished gold in their  terracotta cazuelas and the cinnamon and citrus flavours seem just right for a winter celebration which is a precursor to Christmas.

Here is a single perfect crema catalana in the tiniest of authentic cazuelas: 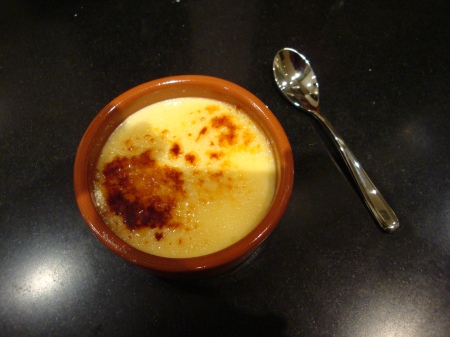 And here are the sliced oranges displayed in my favourite midnight blue and yellow serving bowl.  I had a pomegranate and a couple of passionfruit lurking in my fruitbowl so added these to the oranges for a pleasingly  jewelled effect: 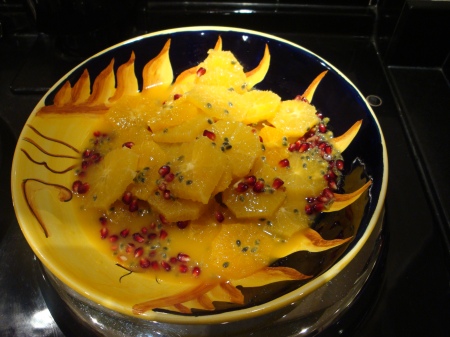 I’ll conclude now with recipes for both the stuffing and the crema catalana.

This recipe comes from Nigella Lawson’s book “Feast” with just a few small modifications of my own.

Ingredients for the cornbread

Ingredients for the stuffing

First make the cornbread.  Preheat the oven to gas mark 6/200 degrees C then prepare  a square 23 cm tin (5cm deep) either by greasing with butter or lining with baking paper.    Mix the cornmeal, flour, sugar, salt and baking powder in a large bowl.  In a measuring jug beat together the milk, egg and melted and cooled butter.  Then pour the wet ingredients into the dry, stirring with a wooden spoon until just combined but no more – the odd lump is desirable at this stage.  Pour into the prepared tin and bake for 15-20 minutes.  When ready, the cornbread should just be shrinking from the sides.  Most of the cornbread is needed for the stuffing but there should be just enough for one slice for the cook to eat, still warm from the oven and spread with butter.

Now complete the stuffing.  Zest and juice the orange.  Put the cranberries into a heavy based saucepan along with the zest and juice of the orange.  Bring to simmering point on a moderately high heat on the stove top, then add the honey then cover the pan and turn down the heat and simmer for 5 minutes.  Add the butter to the pan allowing it to melt then add the cornbread crumbs.  I simply break up the warm cornbread with a fork to give desirably rough-textured uneven crumbs.  Beat in the eggs along with the ground cinnamon plus a little salt and pepper.

I found this recipe on the web after returning from an inspirational trip to Barcelona in October 2005.  It came from a US site with the unpromising sounding name of Cook’n Grill’n but claimed to originate from Barcelona landmark restaurant Set Portes which I visited on my trip.  The recipe works and tastes authentic.  The recipe I found required no less than 7 egg yolks and stated that it served 4 people.  My cut-down version requires 5 yolks and makes approximately 8 tiny pots.  The four people envisaged in the original recipe must have been very greedy indeed…

more golden caster sugar for caramelising surface of the creams

Combine the milk, cream, orange and lemon zests and cinnamon sticks in a medium sized heavy based saucepan and bring almost up to a simmer on a low heat.  Let the mixture cook for about 10 minutes so that the milk and cream become infused with the cinnamon and citrus but do not let it boil.  Remove from the heat, cover to prevent a skin forming and allow to cool a little.

Whisk together the sugar and egg yolks in a medium sized bowl.  Whisk in the flour.  Strain the infused milk and cream mixture into the yolk mixture in a thin stream and whisk to mix.  Return this mixture to the saucepan and bring gradually to simmering point over a low heat, whisking steadily.  The mixture must be allowed to thicken and cook otherwise it will not set.  Do not allow to boil rapidly or overcook or the custard will curdle.

Once the mixture has thickened, divide it between 8 small gratin dishes.  Individual terracotta cazuelas are authentic if you have them – this is how the crema is served in Barcelona.    I bought mine online back in the UK from http://www.delicioso.co.uk/spanish-food/Kitchenware/

Cover the creams with clingfilm and refrigerate for at least 2 hours.

When you are ready to serve, remove the creams from the fridge and sprinkle the surface of each one with 2 teaspoons golden caster sugar.  Quickly caramelise using a kitchen blowtorch.

You are currently reading A Very British Thanksgiving at The Rhubarb Fool.