‘Twas the night before Christmas

With a bit of arm twisting, making mince pies becomes a family affair.    It’s certainly more fun with three helpers in the kitchen and don’t let anyone tell you children don’t like mince pies. You can watch us by following the link below:

I always plan to have my Christmas cake finished by mid December, but it ends up inevitably a last minute job on Christmas Eve.  To be fair, the marzipan went on a couple of days ago.  I give below my recipes for apricot glaze, marzipan and royal icing.  I used to buy both marzipan and roll-out icing as they do give a perfectly smooth surface but the taste (I make a point of adding no flavouring whether almond or vanilla to the marzipan to let the taste of the almonds speak for itself) and texture of home-made are far superior even if the decorated cake looks a little home-spun.

I make the marzipan then divide it into two.  Half is for the top of the cake and the other half for the sides. (In fact accurately and greedily because we have two cakes, I make one and a half times the marzipan recipe and divide it into three as one cake is fully decorated whereas just the top but not the sides of the second cake are decorated.  I begin with the top of the cake, coating it with apricot glaze (not the sides yet as otherwise you will get sticky fingers when you pick the cake up).  I roll out a piece of marzipan to a rough circle shape approximately the same size as the cake and invert the cake onto it.  I then trim the edges neatly whilst the cake is still upside down.  Keep the trimmings to mould into marzipan fruit if you’re feeling creative or to stuff Medjool dates with if you’re not.

Next, I turn the cake over and place it in final position on its board.  I then prepare a template out of greaseproof paper, a strip to go round the outside of the cake.  I cut the strip in half as the cake sides will be covered in two pieces of marzipan.  I roll out the second piece of marzipan to a rough rectangle the same shape as my template pieces stacked on top of each other and cut 2 pieces of marzipan using the template as a guide.

Now it’s time to coat the sides of the cake with apricot glaze.  Once this is done, I stick the two side pieces neatly to the cake, trimming and smoothing the seams. I then use my (clean) hands to pat and smooth the marzipan over the cake.  This is what the end result looks like.  Good enough for a wedding cake rather than the rough snow I plan to plaster over it.  Also pictured are my last minute decorations – the sugar pearls I picked up in Paris earlier in the year and some white chocolate snowmen, reflecting the snowy weather conditions outside – it’s all set to be the first White Christmas in ages.

I made the royal icing following my usual recipe.  This is what the starting sugar and egg white mixture looks like before whisking.  The recipe advises that you should add icing sugar to the egg whites “until the mixture falls thickly from a spoon”. 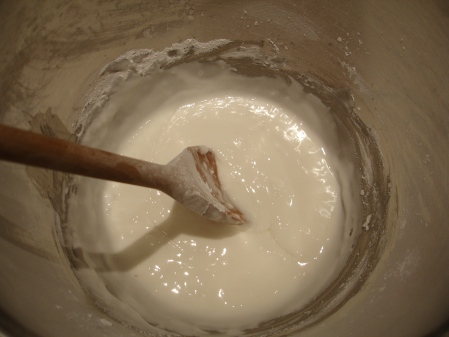 And here is the same icing after 10 minutes’ whisking.  It now holds its shape and forms little peaks.  My long serving Kenwood mixer makes light work of this job.  I think you do need electrical assistance here, whether a hand-held whisk or free standing mixer with whisk attachment.  The icing dries to a deliciously powdery and crisp texture thanks to the air it contains.  Don’t forget the teaspoon of glycerine to avoid the icing setting to a tooth-breaking plaster consistency.

Here’s the finished cake taking pride of place on the Christmas dining table with the white chocolate snowmen gazing out onto the snowy scene outside.

Time to get on with the Christmas dinner preparations now and finally enjoy a little time off.  I’ve concentrated on Christmas baking on the blog this year so you’ll just have to imagine the goose roasted to mahogany crispness appearing out of our oven on Christmas day…

This recipe (which is hardly long enough to deserve the name!) is my own.  It makes enough to cover an eight inch cake, top and sides with some leftover.  Spread what’s leftover on some toasted panettone for a Christmas breakfast or mid-morning treat.

Melt the apricot jam and apricot brandy together in a small saucepan.  Add the lemon juice and stir well.  Rub the mixture through a sieve using a wooden spoon, pressing hard so that as much fruit pulp as possible goes through.

Reheat in a small saucepan boiling until the right consistency is achieved if the cooled glaze looks too runny.

This comes from Leith’s Cookery Bible, and as the book says, it gives a softer, easier to handle paste than the more usual uncooked marzipan.  A hand held electric whisk is I think essential before you embark on this recipe.  I have removed the suggested almond and vanilla extracts from the list of ingredients in the original recipe as I like the natural taste of the almonds themselves to shine through unadorned.

I have found that the texture of the finished paste is variable.  Sometimes it comes out just right, sometimes a little too soft for rolling.  Presumably this is because of variations in the size of the eggs and the age of the ground almonds.  If this happens, simply add more ground almonds, caster sugar and sifted icing sugar in a 50:25:25 ratio (as per recipe) until the paste is the right texture for rolling out.

This quantity of paste is just enough to cover an 8 inch cake, top and sides.

2 medium eggs
170g/6oz caster sugar (I use the golden variety)
170g/6oz icing sugar, sifted
(if you find, as I did, that there is nothing except granulated sugar in your cupboard and the shops are closed, fear not! I ground the sugar into a coarse powder in my electric liquidiser and used this rather than a mixture of caster and icing sugar.  The end result was good – perhaps even better than using different sugars)
340g/12 oz ground almonds
1 teaspoon lemon juice

Beat the eggs lightly in a heatproof bowl.  Sift the sugars together and mix with the eggs.  Stand the bowl in a saucepan of simmering water and whisk until light and creamy or until the mixture just leaves a trail when the whisk is lifted.  Remove from the heat and whisk until the bowl is cold.

Add the ground almonds and lemon juice.  Check consistency and adjust if necessary as described above.  Lightly dust a board or scrupulously clean work surface with sifted icing sugar.  Carefully need the paste until just smooth.  Do not overwork as the oils will be drawn out resulting in a greasy paste.  Wrap in cling film and keep at a cool room temperature until you a ready to use.

This recipe comes, like the fruit cake it covers, from Delia Smith’s “Complete Cookery Course”.  The addition of  a little lemon juice which cuts the sweetness of the icing ever so slightly is my own.  I wouldn’t attempt this without an electric mixer of some kind.  Don’t be tempted to add more glycerine than suggested as otherwise your icing may not set.

Place the egg whites in a perfectly clean grease-free bowl.  Stir in the icing sugar, a spoonful at a time, until the icing falls thickly from the spoon (see picture above).  You will probably not use all the icing sugar you have sifted – just spoon it carefully back into its box.

At that point, stop adding any more sugar and whisk with an electric mixer for 10 minutes or until the icing stands up in peaks.  Then stir in the glycerine.  Spooned into a jar, the icing will keep happily in the fridge for several days.

§ 3 Responses to ‘Twas the night before Christmas

You are currently reading ‘Twas the night before Christmas at The Rhubarb Fool.