The African Cup of Nations tournament reaches a climax this weekend with the final being contested on Sunday 31 January 2010. Briefly, the spotlight will shine on Luanda, Angola’s capital when Ghana and Egypt compete for the trophy.  What might the teams eat for breakfast beforehand?  We can offer the following menu based on an Angolan breakfast we prepared at home a couple of weeks ago.

I talk about Angola’s colonial past but it was as recently as 1975 that Angola achieved independence from Portugal.  Civil war lasting until 2002 broke out almost immediately, a civil war that didn’t really impinge very much on our consciousness over here.  I remember with some embarrassment being questioned by a sharp civil service interviewer about my views on the conflict in Angola when I attempted to join the foreign office some years ago now.  As a callow twenty year old I didn’t have much to say and stared back at him blankly.  No, I didn’t get the job…

In terms of geography, Angola sits just above Namibia on the west coast of southern Africa. Huge numbers of square miles or kilometres become  meaningless to me after a certain size: at 481,000 square miles, Angola is very roughly twice the size of France (or twice the size of Texas for those with a more transatlantic viewpoint). I took a dreamy trip along Angola’s 1,000 mile long Atlantic coastline, courtesy of Google Earth – seemingly endless sandy beaches with Atlantic breakers hitting the shore. There must be potential for Angola to become a cult surfing destination.  Sure enough, go to YouTube and you will find mesmeric scenes like this one.  Those in the know would call it a left point break:

How did I come up with the breakfast menu?  Cassava flour is a staple food across West Africa.  The name for this in Angola is funje or fufu.  This is most frequently turned into a porridge.  I found the instructions for making funje porridge here:

They read as follows:

Recipe for funje from Angola

“What you need for the traditional method (of preparing funje) is a deep pan and a funje stick. This is a long-handled stout wooden spoonwith a flattened oar-like blade (typically it’s 35cm or longer). Almost every West African household has one of these (we have my wife’s family version). For perfect funje you need twice the volume of water to the amount of cassava flour.

Bring the water to a boil and as soon as it’s boiling remove from the flame, sit on the floor, wrap in a cloth and hold steady with your feet. Add all the cassava flour in one go and beat energetically with the funje stick. You must beat very hard and fast as the mixture thickens rapidly and if you do not beat thoroughly you will end-up with lumps and hard ‘kernels’ rather than a smooth dough-like porridge.”

My first problem was how to get hold of the funje flour itself.  Fortunately, Manchester is a thriving cosmopolitan metropolis and I quickly located a specialist African grocery, Global Africa, based in Hulme market hall (just next to Asda). I give contact details below. The two African guys running the shop viewed me with some suspicion as I walked in.  Any hopes I might have had about engaging them in conversation about the tropics and picking up some recipe tips were quickly dashed.  Our exchange was monosyllabic but I did end up with what I was looking for – a 3kg bag of fufu, the cheerfully packaged Tropical Sun brand.

This is how I interpreted the recipe instructions, swapping funje stick for a conventional wooden spoon:

I am sorry to report that my first attempt at funje was lumpy and full of the hard pellets that the above instructions tell you to avoid. It would be an understatement to say that this was not one of my favourite breakfast foods.  It had a distinctly challenging slippery, gelatinous consistency and the taste was bland but with a not altogether appealing chemical astringency.  I managed a teaspoonful but then I must sheepishly report that I put the rest on our compost heap.

I read about pão burro (literally donkey bread) being a traditional Angolan food but internet searches revealed no recipes, just references to a funky sounding Angolan rapper who has adopted this as his stage name.  I came up with a rustic bread recipe, half wholemeal, half white flour which is my interpretation of what something called donkey bread might taste like.  To go with it, I thought quince and plum conserves (from pukka English jam makers Tiptree) had the Portuguese influence I was looking to incorporate.

Angola does produce tropical fruit and some coffee, but there’s little or no chance of finding Angolan exports over here so we made do with a Ghanaian pineapple, some bananas of indeterminate origin and a guava (which being South American isn’t in fact at all authentic!) plus our usual house coffee blend.  Here’s the finished breakfast ready to be served. 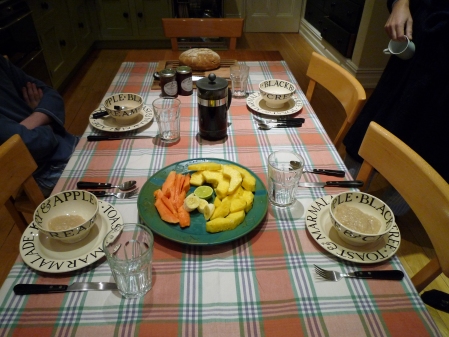 May the best team win on Sunday!

§ 4 Responses to Angolan breakfast of champions

You are currently reading Angolan breakfast of champions at The Rhubarb Fool.