Tartiflette, or, I need another cream, cheese and potato fix now! 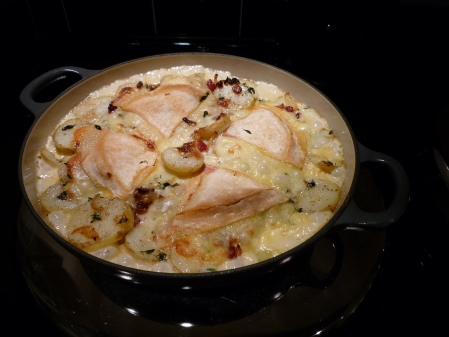 Back home for 10 days now and still pining for the sunny crisp weather and the food of the French Alps.

I decided I could hold out no longer and visited the very wonderful Cheese Hamlet in Didsbury to buy a splendid Reblochon, half to savour au naturel (that is just a wedge of cheese and a glass of wine rather than me eating the cheese in my birthday suit) and the other half to turn into an unctuous Tartiflette, the potato, cheese and cream gratin which is a speciality of the Savoy Alps in France. You can find a link to the Cheese Hamlet’s site in my blogroll/links section in the sidebar. Here it is again just for good measure:

Having picked up a leaflet about Reblochon whilst in Moutiers 10 days ago I feel obliged to show off with a few cheesy facts:

• The name Reblochon is derived from the verb reblocher literally “to pinch a cow’s udder again” because the cheese is made from the more creamy milk of a cow’s second milking of the day.
• Reblochon achieved AOC (now the European AOP Appellation d’Origine Protégée) status in 1958 and is produced in a small region within the département (administrative region) of Haute-Savoie centred around the Aravis massif in the Alps.
• Reblochon is produced from unpasteurised cows’ milk from 3 permitted breeds: Abondance; Tarine; & Montbéliarde.
• The rind of an authentic AOP Reblochon cheese will bear a small edible seal made of the naturally occurring protein caseine; the very special Reblochon Fermier has a similar green seal.

That’s enough of the academic stuff. What you really need to know is that Reblochon is a creamy semi-soft cheese with an earthy nutty flavour and an apricot coloured edible rind which is dusted with a naturally occurring white mould. And if you are in the United States, sorry folks you can’t get hold of it because of your (misguided) countrywide ban on cheeses made from unpasteurised milk. Your loss I’m afraid….

This is my version of this classic Savoyarde potato gratin, pretty similar to the one found in my authentic Reblochon information leaflet. Some ersatz supermarket-derived recipes suggest cubing the cheese or, horror of horrors, cutting off and discarding the rind. No, no, no! When the cheese is halved horizontally and placed rind-side up atop the potatoes, it becomes deliciously crispy and brown when baked in a hot oven, absolutely the point of this dish.

The specified quantity is enough for 2 greedy people. Serve with a simple green salad and a glass of crisp white wine (ideally an Apremont from Savoie). The name of this dish is derived from the Franco-Provençal word for potato – tartifla.

Here’s the Tartiflette ready to go into the oven. The finished dish can be seen in at the top of this post. 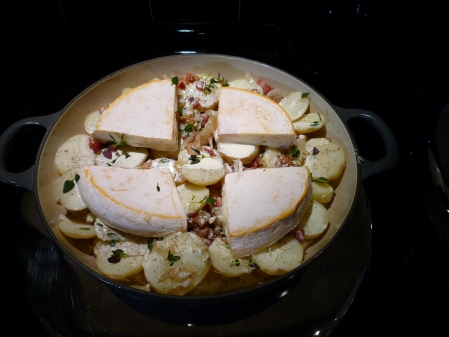 Preheat the oven to 220 degrees C. Fry the onions and lardons together until golden brown. Grease a cast iron gratin dish generously with butter. Layer half the cooked sliced potatoes in the bottom. Season then spread over them half the onion and bacon mixture. Repeat with the remaining potatoes, onions and bacon. Pour over the cream and top with the Reblochon cheese, which you should cut in half first horizontally then vertically, rind and all. See picture above.

Bake for 12-15 minutes until bubbling and golden brown.

You are currently reading Tartiflette, or, I need another cream, cheese and potato fix now! at The Rhubarb Fool.