We took a deep breath and decided to book a table for all four of us at this French restaurant which takes itself very seriously. Time to teach the boys some proper table manners.

We visit Fontainebleau pretty much every Easter mainly for the rock-climbing (in fact bouldering which is climbing with no more equipment than a chalk bag and crash mat). This is younger son Arthur doing his thing with the help of 2 “spotters”.

Just once during the week it’s good to have a change of milieu so we dress up as smartly as our holiday wardrobe permits and head off to this Michelin and Gault-Millau recognised establishment situated in the grounds of Bourron Marlotte’s château.

Based on previous visits, the place is clearly kept going by its proximity to INSEAD, the Fontainebleau based business school. We’ve quietly sniggered to ourselves as job interviews are conducted in loud American English at neighbouring tables or as professors hold court surrounded by a clique of adoring students hanging on their every word. A great place to play bullshit bingo as phrases such as “framing the argument”, “low hanging fruit” or worst of all “paradigm shift” bounce off the walls.

Tonight though we were alone until pudding arrived, albeit we were early having booked a table for 7.30. A sign of recessionary times perhaps? Given the behaviour of elder son George who was on top boisterous teenage form that evening this was perhaps a blessing…

The dining room has been completely refurbished since our last visit. Previously it had a bit of shabby suburban conservatory feel with cane furniture and green carpet. The new look is much more chic and sharp, discreetly elegant in shades of steel grey and aubergine. Tables are still opulently dressed with generous white napery, designer stainless steel cutlery and plain crystal glasses. As a passing nod to Easter, each table was decorated with a solitary enormous ostrich egg. George thought it would make a good rugby ball and started to demonstrate. Aagh!

Here is our miraculously intact egg pictured with canapés served on trendy roofing slates. The toffee and sesame cherry tomatoes were weird but strangely good.

The ratio of front-of-house staff to customers was almost one to one. We were looked after by 2 charming young waitresses who exuded French chic and were snappily dressed in perfectly tailored trouser suits. I received the distinct impression that they hadn’t encountered children before though.

Our request for Orangina as an apéritif was enough to turn renowned sommelier Laurent Piro’s face white with shock. It clearly upset him so much he forgot to bring my glass of champagne.

Amusingly, the restaurant’s idea of a children’s menu was foie gras with toasted brioche, poached chicken breast with noodles and a chocolate fondant pudding. To be fair, Arthur did enjoy the last 2 courses but not the foie gras which we shared between the three of us spilling crumbs across the table much to the consternation of the staff.

The various multi-course tasting menus seemed too much for the children to take so, having sorted Arthur out with the children’s menu, the rest of us opted for the basic (relatively speaking) four-course market menu instead.

Our first course was a modern take on a prawn cocktail – avocado mousse, crayfish and some pink tomato foam all served in a massive martini glass. It looked extremely tacky but this was meant to be so in a post-modern ironic sort of way I think. It tasted good – zingy, fresh and light.

Next came dorade (translated as gilthead bream? must check this later) with Mediterranean vegetables and a bouillabaisse sauce – a really successful dish and portions not too large and overfacing. The bream was firm fleshed and subtly flavoured and all the tomato, saffron, shellfish, wine and garlic flavours of a good bouillabaisse were concentrated into the spoonful of sauce served with it.

Next was the cheese course. The restaurant’s speciality is a baked camembert with caramelised apples and salad. This may seem like a novelty in France but back here in the UK we are used to all sorts of fruit and cheese combinations. What I would much have preferred is one of those old fashioned French cheese trolleys. Never mind.

Pudding was a rather lovely poached pear and gingerbread confection: 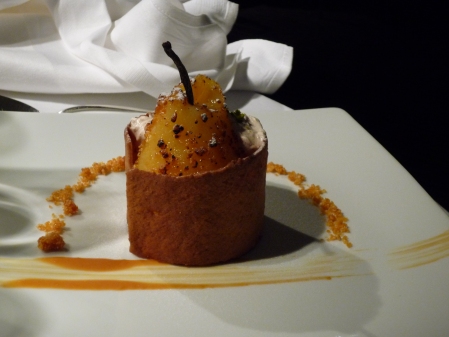 And afterwards with coffee came not one but two trays of dinky petit fours. Here’s arguably the prettier of the two served this time on a hunk of pink marble:

Frankly, I was then rather relieved to make our escape as the children were becoming restless and there was talk of initiating an armpit farting competition. We made our hasty excuses and left.

Les Prémices is a lovely restaurant and I think you would see the best of head chef Dominique Maës’ craft by sampling one of the multi course tasting or surprise menus.

It’s not the place to come for a quick or informal meal though – I wonder if current tastes have moved on and perhaps what people want is a little more informality without compromising on quality. The emptiness of the restaurant on what should have been a bustling Thursday night would suggest this might be so.

You are currently reading Dinner at Les Prémices, Bourron-Marlotte near Fontainebleau at The Rhubarb Fool.