The arrival of warm spring weather coincided with the Delicious magazine’s Italian issue appearing on the shelves earlier this month. Browsing through its glossy pages I noticed a feature on an Italian restaurant that wasn’t (as usual) in London but in the small village of Irby on the Wirral (south of Liverpool) less than an hour’s drive from Manchester.

Da Piero gained recognition beyond its local loyal customer base earlier this year when it was named “Best Newcomer” in the 2010 edition of the Good Food Guide. Hot on the heels of this accolade came recognition (in the form of two knives and forks) in the latest Michelin Guide. It’s owned and run by the Di Bella family, with father Piero in the kitchen, wife Dawn front of house and son Alan sous-chef in training. Piero grew up in Sicily and the restaurant specialises in authentic Sicilian dishes.

Sicilian food in a village on the Wirral? It sounds unlikely doesn’t it? Maybe a Mafia money-laundering operation with links to the Liverpool underworld? Undaunted we booked a table and, on a beautiful Wednesday evening we drove off into the sunset.

Here’s what we found: 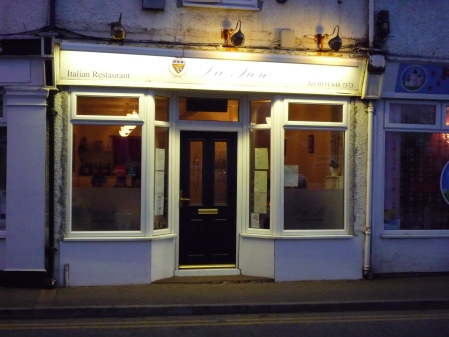 Apparently just a small neighbourhood restaurant in a quiet street. Going inside, it was as if you had walked into your gran’s front room into which someone has unaccountably placed four tables. There are just 15 covers in the restaurant. A couple of black and white family photos hang on a magnolia painted wall and that’s it in terms of decoration. Thankfully no Chianti bottles in straw, red-checked tablecloths that kind of thing.

We were greeted and waved to what was evidently our table by a smiling Dawn. All the other tables were occupied and there was a hum of contented post-meal chat over Italian pop music playing in the background (you may not like piped music but Zucchero is at least authentic).

We browsed the handsomely large menus which are laid out in traditional Italian style (antipasti, primi piatti; secondi piatti and dolci) and the interesting wine list.

Piero is clearly a man who knows what his customers want – the menu is by no means exclusively Sicilian: there are Northern Italian specialities (osso bucco) plus Italian restaurant favourites (spaghetti carbonara) as well. We later discovered that Piero’s family has roots in mainland Italy so the menu is almost a blended family history.

I was determined to have the full authentic Sicilian experience so chose a classic caponata to start, then a pasta with garlic, parsley and hot pepper, followed by home-made salsiccia (sausage) Siciliana with lentils.

Following Dawn’s advice about portion sizes, Tim elected to share the pasta course with me and chose osso bucco as his main course.

The caponata, correctly served warm rather than piping hot, was simple and delicious, each vegetable cooked to perfection. If you don’t know the dish, think of it as a Sicilian version of ratatouille, enlivened with capers and olives. Unusually it contained nuggets of potato along with the aubergines and tomato. A bit odd but entirely successful.

The pasta was good quality factory-made tagliatelle simply dressed with best quality olive oil, browned garlic, flecks of parsely and chilli flakes. I asked Dawn later about whether they made their own pasta – she said they generally used factory pasta but made their own if there was a ravioli special on the menu. This sounds like an entirely sensible decision for such a small restaurant but don’t go there expecting mounds of beautiful home-made pasta. 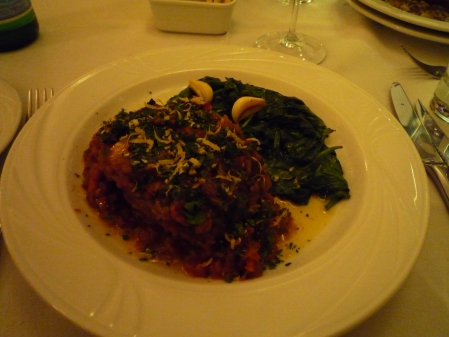 And here is my glorious dish of home-made sausage and lentils: 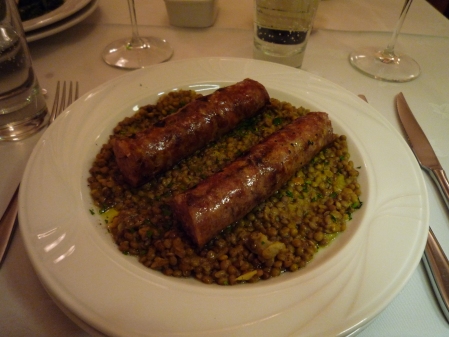 The sausage was rustic and flavoursome with just the right amount of chilli heat and the lentils were the perfect accompaniment and cooked to just the right degree of tenderness. One of those dishes you could eat again and again…

I think it was Ed Balls who that very day (during the election campaign) said he wanted to give one-parent families more money so they wouldn’t have to feed their children lentils every day. Ed, get down here and eat your words!

We’d chosen from the short but interesting wine list a reasonably priced organic red wine (Nero d’Avola) from Sicily (Cerasuolo di Vittoria 2008) which was earthy and just right with the rustic food.

We were too full for puddings so just had a skilfully made espresso each. By now there were just two tables left occupied in the restaurant and as Piero had finished cooking he came out from the kitchen unprompted to meet the remaining guests. He’s a distinguished looking man who, dressed in a toga rather than immaculate chef’s whites, could pass for a Roman senator. He’s passionate about his food and utterly charming. Who can resist a man who’ll share a caponata recipe with you (the addition of potatoes was his own idea) and is such a perfectionist that he makes his own candied orange peel?

What a lovely evening. Don’t come here expecting refined food or a slick city restaurant experience. Simplicity and freshness are what it’s all about together with a genuinely warm welcome. My advice would be to get here while you still can.

You are currently reading Review of Da Piero, Irby (Wirral) at The Rhubarb Fool.