Who threw away all my grits? Bahamian breakfast

Tucking into our breakfast from the Bahamas – corned beef, grits and johnny cake felt like eating a plateful of history. That’s a big thing to be doing at 6.30 am on a dark and cold December Tuesday morning before work and school. Here’s younger son Arthur enjoying his corned beef sauté and grits, liberally sprinkled with Tabasco: 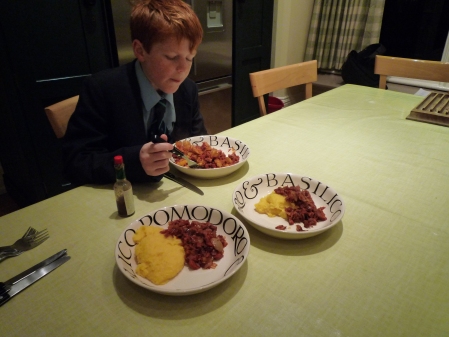 This was the latest in our series of breakfasts of the world (in alphabetical order) and after more than a year at this occasional project it feels good to be hitting the letter B for the Bahamas!

The Commonwealth of the Bahamas is an island chain close to Florida and north of Cuba. Andros is the largest island but capital Nassau is on the smaller island of New Providence. Columbus first made landfall on one of the islands of the Bahamas in 1492 but the islands were not settled by Europeans until English Puritans arrived via Bermuda in 1648. These first settlers survived by salvaging goods from wrecks. The islands became known for piracy and the infamous Edward Teach aka Blackbeard was based here.

Following the American War of Independence (1775-1783) the islands were settled by Loyalists (American colonists remaining loyal to British rule) and their slaves who established plantations on the islands. Britain abolished the slave trade in 1807 and thousands of Africans from slave ships subsequently made their home on the island.

On the menu was corned beef sauté (made from my own home-cured corned beef though the tinned variety may be more authentic) then grits – cornmeal porridge – in fact I used a quick cook polenta though I believe Bahamians prefer harder to obtain white grits. The hash was followed by a traditional Bahamian johnny cake, a simple baking powder raised scone/soda bread thing, quickly prepared then cooked in a skillet or sturdy frying pan:

Grits were the staple food of the slaves who worked on the plantations. They were a cheap carbohydrate and slave owners would give their slaves a weekly ration of cornmeal grits to boil up with water.

Corned beef reflects the British history of the islands. During the colonial period, Great Britain was the Bahamas’ major trading partner. Beef preserved in brine was shipped out in large quantities, another dietary staple for slaves and the poor. The native Bahamians made it their own, adding spices and vegetables to turn the corned beef into dishes like the sauté given below.

The name johnny cake is thought to derive from the name journey cake, so-called because it was quick and easy to make while travelling. Traditionally it’s cooked on the stove top but I opted for baking mine in the oven.

Here’s the home cured beef cubed and ready to be turned into hash: 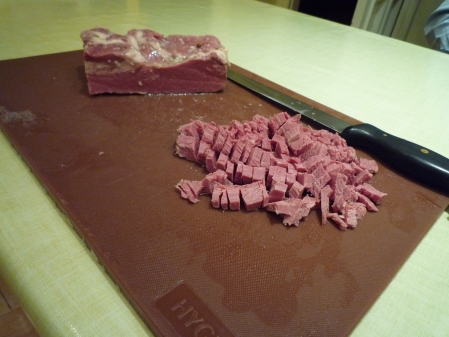 It’s wonderful stuff and very easy to do but you do need to start thinking about it 2-3 weeks before you want to eat it. This deserves to be the subject of another post sometime soon.

Here’s the freshly baked johnny cake just out of the oven: 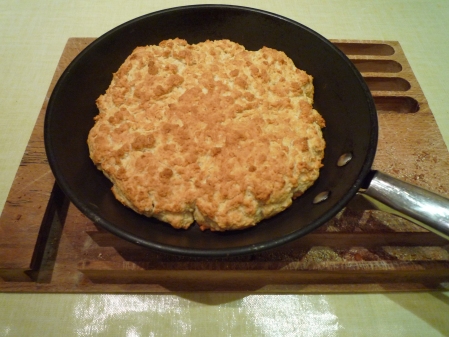 and here it is sliced while warm ready to be thickly spread with butter and ready to be eaten Bahamian style with lots of sweet milky tea or coffee: 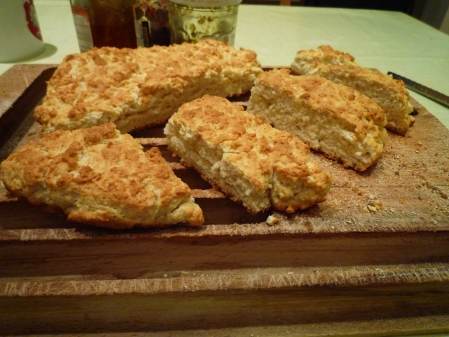 Definitely a breakfast to set you up for the day though in our case not for hard manual labour on plantations. And now the word of the Beach Boys’ Sloop John B (originally a folk son from the Bahamas) finally make sense. “The poor cook he got the fits, and threw away all my grits, and then he took and he ate up all of my corn”.

From website http://www.caribbean.com which in turn credits the recipe to “Many Tastes Of The Bahamas & Culinary Influences of the Caribbean”

Place the corned beef into a medium-sized bowl and break up with a fork in preparation for cooking. Sprinkle with lime juice.

Heat oil in large skillet over medium heat. Sauté the corned beef with the onion and thyme for five to six mins. Stir in the tomato paste and crushed hot peppers to taste.

Add one to three tbsp of water for desired consistency and continue to cook, stirring.

Cover, reduce heat and cook for about 10 min.

Serve with grits or toast.

Makes one 7-8 inch round serving 4 comfortably

Combine dry ingredients then cut in (rub in) shortening until the size of rice grains. Add milk gradually, just enough to make dough soft. Knead dough until smooth then let it rest for about 10 minutes.

Place dough in greased 8 or 9 inch round or square pan. Pierce top of dough with a fork. Bake at 350 for 20-25 minutes or until golden.

§ 6 Responses to Who threw away all my grits? Bahamian breakfast

You are currently reading Who threw away all my grits? Bahamian breakfast at The Rhubarb Fool.