Bajan being the correct adjective to describe something from Barbados, this was the latest in our series of breakfasts of the world.

At 431 square kilometres, Barbados is a tiny country, approximately one third of the size of my own UK county, Greater Manchester which clocks in at 1,276 square kilometres. It was one of the earliest British colonies with settlers arriving in 1627. The British heritage is evident in the island’s organisation and placenames – it’s divided into parishes each named after a saint. The capital and main city, the very British sounding Bridgetown is in the parish of St Michaels.

Barbados may be a small country but it’s a familiar one. That Desmond Dekker song, sugar, rum, cricket and of course the larger-than-life Rihanna all come immediately to mind. That’s not all that’s larger than life as Barbados can put on a big breakfast. The Bajan breakfast option priced at $22 on the menu from Simply Gigi’s, a hotel restaurant which looks out over Barbados’ Dover Beach reads “Flying Fish, Bakes, Eggs, Onions, Peppers, Plantain”. Much more adventurous sounding than the Full English or bog-standard American options. After a little research and judicious cheating, this is the colourful plate of food I came up with: 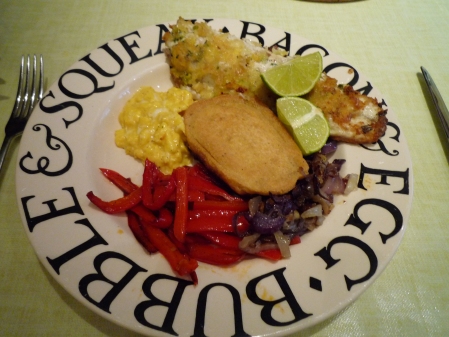 First find your flying fish, the favourite fish and symbol of Barbados. This is not as easy as it sounds. I did track down a UK wholesale supplier of frozen flying fish fillets but couldn’t face ordering the industrial-sized minimum order quantity.

Next step was a trip to the cornucopic fish stall on Manchester’s Arndale Market which goes by the very mundane name of “Direct Fisheries”. They had all sorts of exotic species on offer as you can see: 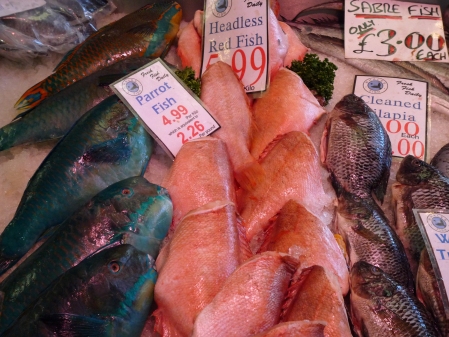 but sadly, flying fish wasn’t one of them – it’s occasionally requested, said the fishmonger, but a bit pricey for most people so they’ve stopped selling it. I opted for a couple of seabass instead. No idea whether it’s like flying fish but it’s a very adaptable fish which works with all sorts of flavours.

The recipe involves a brief period in which the fish fillets are first marinaded/infused with aromatic flavourings (herbs, green pepper and lime juice), then, top side only, lightly coated in egg and breadcrumbs and quickly shallow fried. 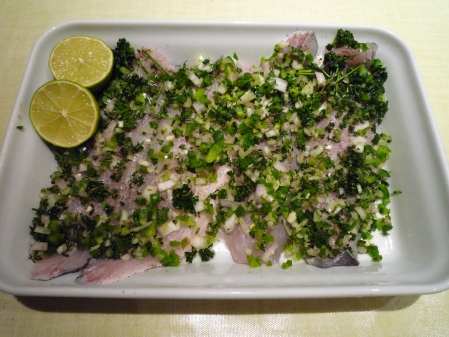 Far from being just a regional curiosity, this is a handy little recipe which I’ll definitely be trying again. The marinading period gives the fish zingy flavours and the crispy golden crust gives a bit of fast food type appeal.

Next step was to find out what Bakes were. This is by no means a selection of bread rolls on the side but a little doughy Bajan treat which paradoxically is shallow-fried rather than baked. Bajan chef John Hazzard’s (pronounced Has-Ard rather than as in traffic obstruction, moral or Dukes of) little videoclip on was helpful in showing exactly how to whip up a batch of bakes.

I had planned to put in here the link to John’s handy little video which I found on a site called theholidaychannel.net but sadly the site appears to have been suspended. You’ll just have to take my word for it that he had a great relaxed manner and his lilting accent was rather lovely to listen to as well.

I followed Chef Hazzard’s instructions to the letter and he end result was rather good – a cross between a Scotch pancake and a doughnut. The brown sugar and spices provide flavour and the cornmeal a pleasing chewy crunch. I can see why the islanders get so passionate about bakes.

Sugar has been the mainstay of the Barbadian (or should that be Bajan?) economy for centuries so it seemed fitting to round off breakfast with something sweet. My choice was Bajan sweet bread, not a true bread but a coconut cake baked in a loaf tin. This beauty is made with refined sugar rather than what we know now as Barbados or Muscovado sugar, it’s studded with garish glacé cherries and raisins and has extra sugar and coconut strip concealed within the cake like so: 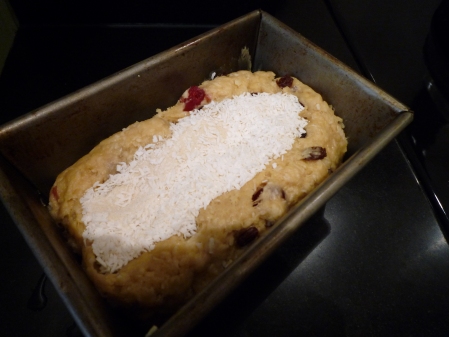 With all that refined sugar, coconut and artificially coloured dried fruit it could almost be a Scottish delicacy couldn’t it? 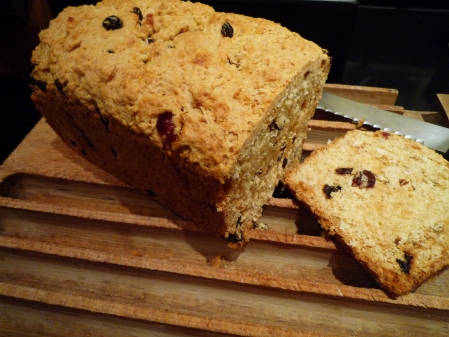 The end result looked impressive in a bulky golden brown homespun kind of way but sadly it was a bit disappointing. It was a bit dry and oversweet, it crumbled rather than slicing neatly, the coconut stuffing fell out rather than maintaining structural integrity and it went stale within 24 hours. For that reason I’m not going to painstakingly copy out the recipe here. If you’re interested, here’s where I found my recipe, a Paul Hollywood (not so) special – he’s the sleek silver haired judge on last year’s BBC programme “Great British Bake Off” you may recall.

I found this recipe in a Barbados travel blog http://barbadostravel.squarespace.com so thank you to blog author Linda Thompkins.

Works well for other medium to large fillets of firm white fish such as seabass.

Mix the seasoning ingredients together and spread over the meaty side of the fish. Leave for about 1 hour. Remove the fish from the seasoning mix, pat it dry it on kitchen paper. Dip the meaty side of the fish fish into the beaten egg and then into the breadcrumbs. Fry gently in a little oil for 3-4 minutes on each side until cooked through and crumbed surface is crisp and golden. Serve with lime wedges.

Bajan chef John Hazzard’s recipe. John has twice been awarded the title “Caribbean Chef of the Year” so he should know what he’s talking about.

Combine the first 7 ingredients in a mixing bowl. Add most but not all of the water and mix well with a spoon to form a batter with a stiff dropping consistency. Add the reserved water if required to achieve the right consistency.

Drop generous spoonfuls of the mixture into the frying pan and cook for a few minutes on each side until golden brown.

Drain on kitchen paper and serve.

You are currently reading Bajan breakfast at The Rhubarb Fool.