The latest in our series of international breakfasts making up the Breakfasts of the World Project.

Unlike most of the far-flung destinations whose breakfasts we’ve tried to recreate at home, hopping over to Belgium is relatively straighforward for us in the UK so we were able to do some serious research on a recent family trip based in Bruges. This combined a little education (First World War graves, Ypres, Flemish painting and architecture) with gastronomic sight-seeing.

I know that Venice has the edge when it comes to a romantic weekend away à deux, but if you’re travelling en famille, as we were, a city which combines gorgeous architecture with chips, chocolate and waffles takes the biscuit (or should that be the speculoos…?).

We stayed in the charming canalside Ter Duinen hotel which these days would probably be called a boutique hotel as this sounds more desirable than “small hotel”. They laid on an impressive breakfast spread and if you were prepared to leap out of bed early, you could grab one of the coveted window seats with gorgeous reflected light from the canal:

This is how we attempted to recreate the experience at home. Not quite as beautiful as the Ter Duinen breakfast I know. I don’t run to white damask in our kitchen but I made an effort with some Flemish inspired tulips.

As you might expect from a country which has been fought over between the France and the Netherlands for aeons, its breakfast is a hybrid between the French influenced café au lait with croissants and the more Northern European influenced hearty brown bread with ham and sliced cheese. You get both at breakfast together with Belgium’s particular contribution to the breakfast universe, a host of tasty packaged treats, the legacy of its industrial and colonial past perhaps?

Belgium may not be known as a cheese producer, but here’s some prepacked slices of Bruges’ finest:

There were little squares of chocolate too – one of the reasons Belgium is world famous. Oddly, I can’t find a decent definition of what Belgian chocolate is – Côte d’Or with its familiar Elephant logo is the indigenous mass-market producer. Côte d’Or or Gold Coast is of course the old name for Ghana which is a former British rather than Belgian colony so how does that work? Maybe Belgian chocolates just refer to the delicious filled pralines sold by Neuhaus, Godiva and Leonidas and many more small artisan producers. A clear and comprehensive definition of Belgian chocolate remains elusive for the time being.

Popping into the Bruges branch of Delhaize (one of the big Belgian supermarket chains) to stock up on Belgian breakfast products I was thrilled to find family sized jars of two types of breakfast spread which we’d sampled only in indiviual portion packs at Ter Duinen. 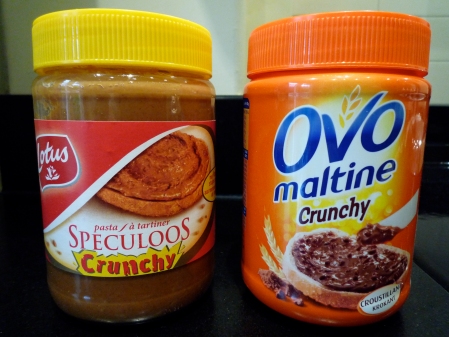 On the right is an Ovomaltine spread based on the popular continental malted chocolate drink – imagine Nutella with the goodness of hazelnuts removed and replaced with nuggets of crunchy malty sugary stuff.

But wait for it, on the left is a jar of Speculoos spread based on the national biscuit of Belgium – a thin crisp ginger-spiced biscuit. Speculoos have a sort of mediaeval feel about them and were no doubt originally hand-made in elaborately decorated wooden moulds. They are most often found now individually wrapped in cellophane, branded Rombouts or most often Lotus, and served as a complimentary sweet nibble with a cup of coffee.

The idea of turning this small spicy biscuit into a spread is as preposterous an idea as a spread made from our own indigenous McVities’ ginger nuts.

Both jars were packed with unsuitable ingredients with a high E number count but nevertheless both have made it onto my not-so-secret list of guilty pleasures. All the family were secretly taking spoonfuls from the jar. I was amused to read recently the similar reaction to Speculoos spread of Paris-based food writer David Lebovitz (http://www.davidlebovitz.com/2010/05/speculoos-a-tartiner-gingersnap-paste/)

Grab a jar if you dare!

You are currently reading Belgian breakfast at The Rhubarb Fool.