The appointed day for our Bhutanese breakfast fell on my birthday this year. It’s become a bit of a family joke that my lovely husband Tim always buys me items of technical outdoor wear for birthdays and Christmas rather than more frivolous items. He was true to form this year and I am now the proud owner of my own very warm down jacket. Perfect to model while eating a breakfast from the Himalayan mountain kingdom of Bhutan:

Landlocked Bhutan lies at the eastern end of the Himalayas between Tibetan China to the north and India to the south, west and east. The delightfully named young king Wangchuck ascended the throne in the capital Thimphu as recently as 2008. The official religion is Buddhism and the country’s policy of measuring Gross National Happiness (GNH) in addition to the more usual and mundane Gross Domestic Product (GDP) has raised its profile internationally.

Our menu was a slightly simplified version of this delicious sounding description of breakfast from Bhutan’s exclusive Uma Paro hotel. Lying in a verdant valley, Paro is a centre for tourism and the precipitously sited Tiger’s Nest monastery lies just to the north of the city. To quote the website blurb:

“For a fresh start to the day, try our rosewater lassi. And before a challenging mountain trek, consider a Bhutanese breakfast: pork and red rice porridge with egg crepe, hogay salad and ezay”

Rosewater lassi was straightforward enough to whip up and was a rather gorgeous birthday breakfast treat: 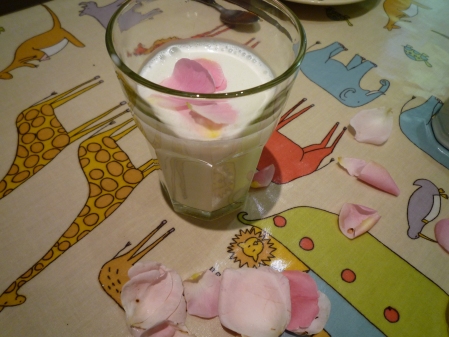 Based on what I’ve read elsewhere, red rice porridge, minus the pork, is clearly a Bhutanese staple. As Bhutan is a mountainous country, the main concern of the indigenous population seems to be the consumption of sufficient calories to survive in a cold climate. One way to achieve this is to add copious quantities of butter and cheese to pretty much every dish. Thus tea is drunk with salted butter rather than milk and rice porridge is enriched with both butter and cheese.

After an extended debate with the dozy local depot of courier firm DHL, I was thrilled to take delivery of a single precious pack of authentic red rice imported from Bhutan via a circuitous trade route involving a Californian wholefoods supplier: 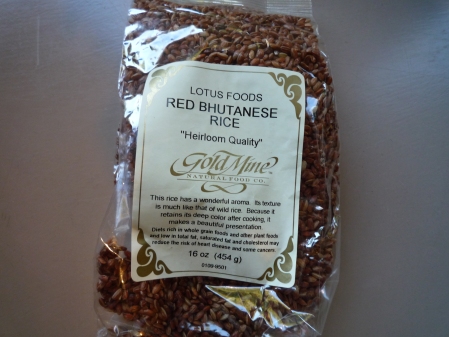 Once I’d got hold of the rice, making the porridge was a straightforward, if lengthy affair. I give the recipe I used below. 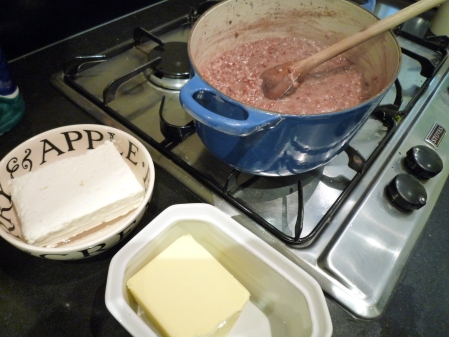 I decided that an egg crepe sounded rather like an international omelette so that didn’t make the breakfast cut. Hogay and ezay are both in the salsa/relish/salad category and are pepped up with copious quantities of chilli, the favourite condiment of Bhutan. I tossed a coin and decided to make an ezay to accompany the porridge:

What did it taste like? Well, a bit like risotto with a dollop of cheesy salsa on top, a weird Italian/Mexican/Asian fusion.

Would I eat it again? Realistically, probably not as, let’s face it, it would be hard to improve on well made risotto milanese, and if I wanted salsa I’d rather roll it up in a burrito.

Adapted from a recipe I found on Mark T’s life in Bhutan blog. Here is the link and thank you to Mark for making the recipe available – it works! http://eyeamempty.blogspot.com/2010/01/doing-porridge-for-dad.html

250g Bhutanese red rice (having tried the Bhutanese rice I think Camargue red rice which is more readily available here in the UK would be just fine here)
Enough water to cover the rice by about 5 cm
3 tablespoons butter
200g block of feta cheese, roughly crumbled
a pinch of chilli powder, or more, to taste
1 1 inch piece of peeled fresh ginger root, grated (best achieved with a Microplane type grater)
Salt and pepper

In Bhutan, a pressure cooker would be used to boil the rice until soft (5 whistles!) – essential at high altitudes. I brought the rice to the boil then covered and simmered for 25 minutes until the rice was cooked.

Take the lid off and check for consistency. Add more water if needed, continuing to cook with the lid off, stirring frequently. My porridge took about 45 minutes from start to finish, so another 20 minutes after the rice had softened.

When the rice has cooked down to a thick porridge like consistency, add the butter, cheese, and seasoning ingredients. Stir, taste, check seasonings, then serve accompanied by ezay (see next recipe).

Serves 4-6 as an accompaniment

My own version of this dish after reading several recipes. I’ve substantially reduced the chilli to take account of our low western chilli heat threshold and have substituted cherry tomatoes for the hard to obtain Himalayan tree tomatilloes and feta for yak’s milk cheese.

Combine all the ingredients except the feta in a bowl. Stir to mix and set aside in the fridge for half an hour to let the flavours combine. Sprinkle over the crumbled feta cheese when you’re ready to serve.

Again, my own recipe after experimenting a little with proportions. I think you need a liquidiser with a chunky motor rather than a food processor to cope with crushing the ice and getting a good froth on the lassi.

Put all the ingredients except the rose petals into the goblet of your scrupulously clean liquidiser and, with a firm hand over the lid in case the ice cubes are a bit rough, whizz for about 20 seconds or until the ice cubes are broken down and the mixture is frothy. Taste and add a little more sugar or rosewater if you like, whizz again, then pour into tall chilled glasses. Scatter over the rose petals and serve.

You are currently reading Bhutanese breakfast at The Rhubarb Fool.