Yikes, we’re well into February, it’s almost the half-term holiday and I still haven’t written-up our New Year meal. It’s high time I put this right. We’ve been doing the new year thing since the big millennium celebration in 2000 and have taken turns hosting along with Neal & Shelley and Mike & Janet.

It fell to us to host this year and it occurred to me that despite my enthusiasm for all things Alpine I’d never yet chosen a Swiss theme. The challenge would be to avoid as many Swiss clichés as possible – cheese, chocolate, cowbells, cuckoo clocks and similar tat, and to keep the dishes relatively light so we’d all make it into 2012 feeling fit and raring to go.

Here’s the menu I came up with. You’ll see I didn’t entirely succeed with no cheese/light cuisine idea as the Malakoffs – deep-fried battered chunks of gruyère sound like the (Scottish?) first cousin of the deep fried Mars bar, but I couldn’t resist:

Menu decided, next step was to set the scene. There’s never time to sort out a table centrepiece when you’re preparing a meal so I called in professional help in the form of Vicky Clements’ magnificent Swiss flag inspired floral arrangement in red and whie, a veritable alp in miniature (see her contact details below if you’re in or around S Manchester/Cheshire):

Vicky was responsible for the fairy-lit hearts too. Sehr gemütlich, Ja? 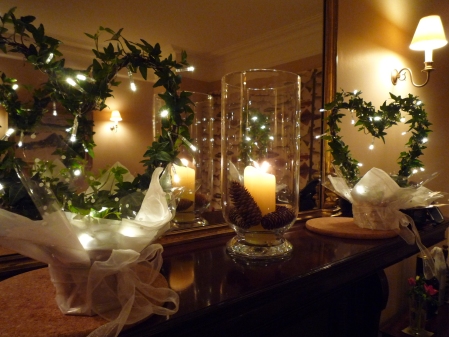 I dusted down my piping skills to write dinner guests’ names on an experimental batch of moulded biscuits using my newly acquired Swiss Springerle moulds. They were a little involved to make but I was quite pleased with these as my first attempt. My piping is rusty though and it took a few attempts to steady the hands and create something legible:

Air dried beef is usually served as part of a large platter of cured meats and cheeses in Switzerland. We chose to roll the beef around celeriac remoulade which created a light and fresh-tasting canapé packed with flavour. Janet made the celeriac – very simply made by mixing raw grated celeriac into a Greek yoghurt, lemon and parsley dressing – and assembled the canapés and very pretty they looked too. Celeriac makes a fantastic winter salad and we’ve eaten it several times already since then:

The doyennes of cookery and entertaining always tell you not to try out new recipes on your guests don’t they? Well, I think rules like this are meant to be broken, but sometimes minor disasters will ensue. I think it’s fair to say that the malakoffs didn’t work. Tim was banished to the garage to deep fry these battered cheese parcels. I can’t abide the smell of deep-frying fat in the house, so our deep-fat fryer lives very happily in the garage which means that, with the assistance of the barbecue it’s pretty easy to rustle up a mean steak and chips for al fresco consumption in the summer.

I thought we’d followed the malakoff instructions on the Swiss food blog http://www.fxcuisine.com to the letter. Maybe the batter was too light, maybe the oil was too hot, maybe we cooked them for too long, but when we came to consume the malakoffs, they turned out to be hollow as all the molten cheese had leaked out into the frying oil creating an unholy mess (which I have yet to properly clean up I’m ashamed to say). The fritters looked the part and retained enough of the ghost of a flavour of cheese to allow you to imagine how delicious a correctly cooked malakoff might be. Another time… 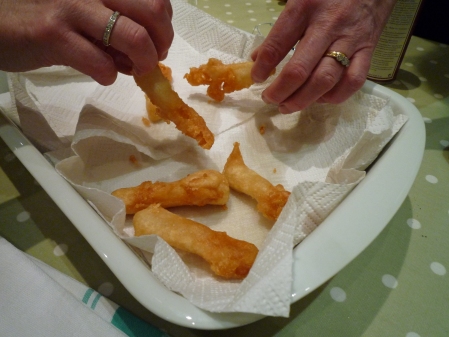 We began the meal proper with an unusual hay soup, expertly prepared by Shelley. This is a traditional Swiss soup, different versions of which come from the mountainous cantons of Valais and Graubünden. I’d tasted this in Klosters a couple of winters ago, and it looked so pretty presented on its bed of hay and garnished with dried meadow flowers that I had to put it on our menu.

I couldn’t find a definitive recipe but found several different versions by searching under “Heusuppe Rezept”. Our version used a hay-infused light stock, a flavour base of sweated vegetables and a little pearl barley to thicken. I think I’d like to try out the other versions before publishing a definitive recipe.

Sourcing the hay proved to be harder than I’d thought. I scoured farms in the Lake District and Yorkshire Dales for an elusive handful of local organic meadow hay but without success – all I was offered was silage which I don’t think would make a very pleasant tasting soup. In the end, The Hay Experts (see contact details below) came to my rescue. They really do know their hays (even if the end consumer is usually a pet rabbit) and despatched just what I needed very promptly.

Our next course was a miniature version of the Luzerner Chugelipastete – an exuberant puff pastry dome filled with braised veal and veal sausagemeat in a creamy saffron flavoured sauce. In order to cut down on the pastry, I made pastry lids to cover the braised veal which was served in individual ramekins.
I posted last year on the subject of this dish:
https://rhubarbfool.co.uk/2011/03/03/lunch-in-lucerne/

I used a couple of cheat steps when I made the miniature version of the dish. Short of time, I used Dorset all-butter puff pastry – reliably good if you don’t have time to make your own. Instead of veal forcemeat balls made from scratch I used a pack of veal meatballs from Waitrose. These are made from ethically sourced British rosé veal and are delicious and versatile. Actually, I didn’t follow the Marian Kaltenbach recipe for the sauce which I’ve quoted before at all. I flash fried strips of veal tenderloin, combined them with the cooked veal meatballs, added a little stock and cream, reduced the whole lot down to make a sauce and added grapes macerated in a Swiss grappa type schnapps to finish. I was reasonably happy with the end result:

We were now well set up for the main event, a fabulous-looking venison tenderloin supplied from The Blackface Meat Company who are based up near Dumfries in Scotland. I’ve used them a couple of times before for game and rare breed meat. They may be a little expensive but they supply top quality meat, expertly butchered and delivered promptly and efficiently to your door.

I did try and obtain some local venison from Dunham Massey. Each year, the deer are culled and just a few of the younger deer are butchered and sold to the public via a local farm shop. Unfortunately because of problems with poaching this year I didn’t know if my tenderloin was going to turn up on time. When finally I did get the call that the venison was available, I was a little disappointed with what the butcher had done as this tenderloin was nowhere near as expertly trimmed as the Blackhouse meat. So Dunham’s answer to Bambi is in the freezer ready for a future Sunday lunch.

The Blackhouse website lists useful recipes and I followed chef Mark Hix’s instructions for marinading the venison in red wine before flash-frying and serving with a red wine reduction. Not an authentic Swiss recipe but very Swiss in character as you’ll find lots of robust game dishes cooked with red wine in restaurants during the autumn and winter hunting season.

The venison was expertly cooked by Janet and was served with everyone’s favourite Swiss dish, potato rösti,braised red cabbage and a spoonful of Preiselbeer sauce. The Preiselbeer is a smaller, tastier European relative of the more familiar North American cranberry. It’s also known as the lingonberry in Swedish and here in England it’s known as the cowberry but is not a popular forager’s fruit as yet.

Sorry my pictures of the finished dish are too dark to be meaningful, but here are photos of the meat bathing in its marinade, the same meat cooked and carved, and a jar of the Preiselbeer sauce brought back from a little shop in Klosters: 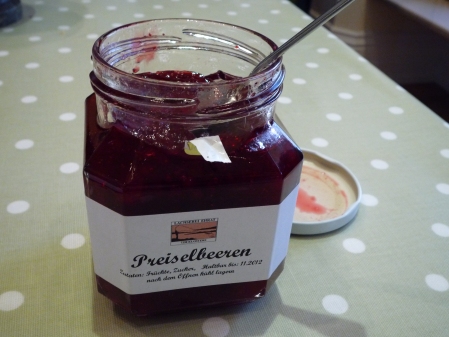 Avoiding the temptations of triple Toblerone chocolate mousse and the like, I chose a simple walnut and honey parfait for pudding served with prunes cooked in red wine and spices to give a delicious festive mulled-wine flavour. Alongside the parfait and prunes I served a traditional Swiss/German advent biscuit, the Zimtstern – a cinnamon flavoured dough made like a macaroon from ground nuts, sugar and whisked egg whites, topped with a crisp meringue icing. These are nutty, chewy and delicious and a tad difficult to make. I’ve not given the recipe in this post as frankly it’s too long already, and they merit a post all of their own. 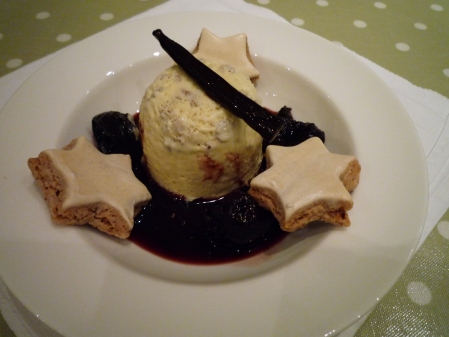 To conclude the meal as we approached midnight, a superb Vacherin Mont d’Or cheese from the Jura region of Switzerland, one of my favourite cheeses. It’s soft and creamy and can be spooned out of its wooden box when properly mature and ready to eat. It’s only available during the winter months. Ours came from the Duty Free shop at Zürich airport, but you can find it over here sometimes either in a specialist cheese shop or occasionally in Waitrose. If you find one, grab it, you won’t regret it.

I couldn’t possibly list all the evening’s recipes in a single post – in fact to help with the preparations, I photocopied and printed them all out and have enough material for a small cookery book!

I’m just going to give two recipes, both straightforward and both now in my regular repertoire.

My lighter, fresher version of this bistro classic, replacing the usual mayo with Greek yoghurt.

Serves 4 or more as part of a selection of salads

Grate the celeriac quite finely (easiest to do this in a food processor) and in a medium bowl mix thoroughly with the lemon juice to stop the celeriac turning brown. You can prepare the celeriac to this stage then refrigerate it several hours ahead of time and it will still be fine. When you’re ready to serve, add the other ingredients to the bowl and stir to combine.

Translated from the German and adapted from a little Swiss cookbook called “Geliebte Schweizer Küche”.

For the mulled prunes

Begin by making the mulled prunes the day before you plan to serve the dish. Put all the ingredients into a saucepan, bring to the boil then leave to cool and infuse overnight.

Next make the parfait. You can make this a couple of days ahead of time as it’s frozen. Mix the eggs, honey, powdered cinnamon and Grand Marnier together in a bowl. Using an electric whisk, beat together until the mixture is light and foamy. In a separate bowl, whisk the cream to the soft peak stage and combine with the egg mixture and chopped walnuts. Divide the mixture between 6 or more small moulds (china teacups or ramekins are fine) and freeze for at least four hours.

When you are ready to serve, dip the moulds briefly into hot water, loosen with a knife if necessary and invert onto individual serving plates. Spoon the prunes and red wine sauce around and serve.

The Hay Experts – suppliers of organic and other hays
http://www.thehayexperts.co.uk/

You are currently reading Swiss new year at The Rhubarb Fool.