THE FULL MONTY: breakfast from Bolivia

Unusually this time our breakfast comes from a country that one of us (my husband Tim) has actually visited. This was a climbing trip to the Andes hooking up with various members of the Oxford University Mountaineering Club. Three of the team are pictured below, from L to R Simon Beaufoy, Mike,and Doré. Simon has gone on to become well known for his screenplays so I thought it might be fun to try and shoehorn into this post the titles of all Simon’s screenplay titles. I’ll stick them in capitals so you’ll know why this post might sound a little stilted. I hope the guys don’t BURN-UP taking in all that high altitude sunshine and it looks as if Doré at least found time for a BLOW DRY. 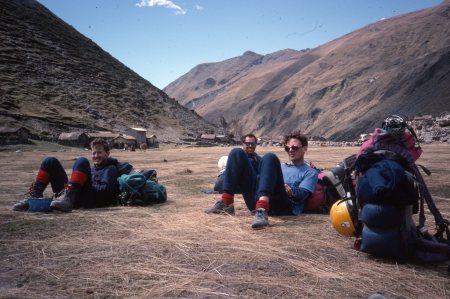 Husband Tim, not pictured AMONG GIANTS above, is in this photo, looking rather younger than he is now, a bit of a SLUMDOG MILLIONAIRE with the designer sunglasses and “I’ve not shaved for 127 HOURS” designer stubble. 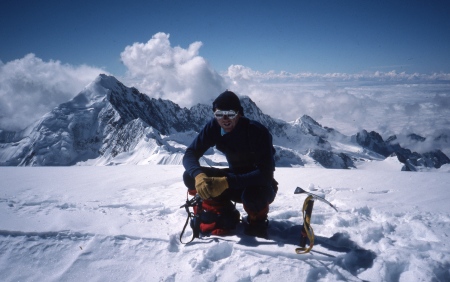 Here’s one of the team again (maybe Alex whom I’ve not yet mentioned?), not SALMON FISHING IN THE YEMEN but using his RUNNING TIME to stride purposefully towards a herd of a llamas in a high Andean glaciated valley. The objective was the ascent of Ancohuma, at 6,427m Bolivia’s third highest peak located in the Cordillera Real range of the Bolivian Andes. 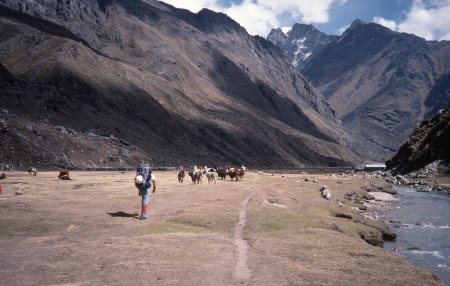 Tim’s recollections of what they ate for breakfast during the expedition were hardly clear (more 10×10 than 20×20). He muttered vaguely about living dangerously by carrying fresh eggs in his backpack and the joys of homemade chapatis at base camp. So it was over to me to research a traditional Bolivian breakfast. Two dishes took my fancy, the first, Api Morada, something halfway between a drink and a porridge made with purple corn flour: 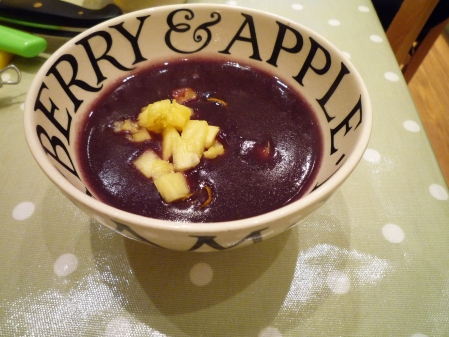 and the second, Bolivia’s answer to the Cornish pasty, the juicy beef-filled salteña, its YELLOW colour coming from an egg and paprika glaze. Truthfully, the one in the bottom right corner caught in the oven just a tad so its colour might best be described as THE DARKEST LIGHT. 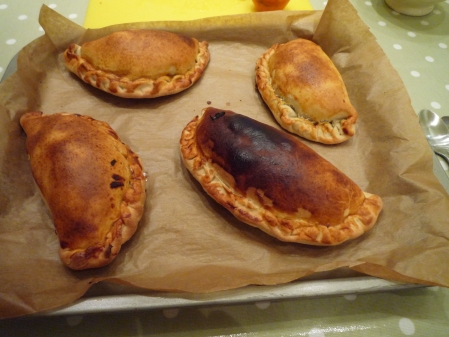 The Api Morada turned out like a Spanish hot chocolate, thick, spiced and velvety with a curious grapey flavour no doubt attributable to the naturally occurring anthocyanins which give the corn its vivid purple colour. 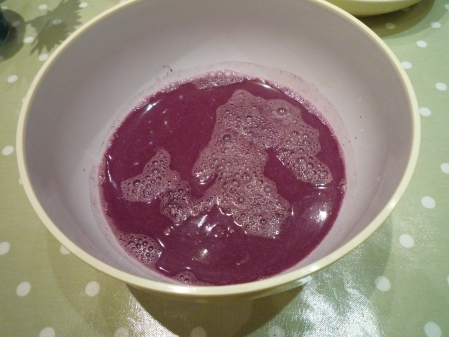 It’s pretty straightforward to make, the only hard part being the sourcing of the purple corn flour. Fortunately, small supplier “Detox Your World” trading on Amazon came up trumps: 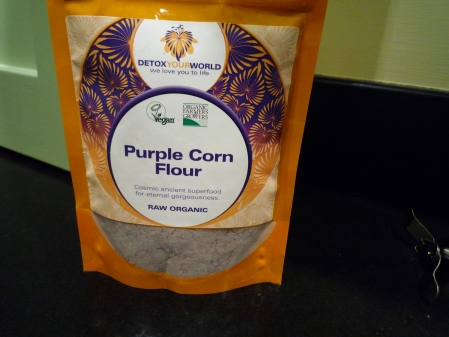 The salteñas are more often eaten as a mid-morning snack with coffee rather then being a true breakfast dish but were too good to miss out. The filling in the recipe I’ve chosen is minced beef livened up with peas, spices, raisins, olives and chopped hardboiled egg. The masterstroke is the thickening of the meat juices with a judicious amount of gelatine. This means you can spoon a generous heap of cold set filling into the pastry and end up with plenty of lovely gravy when the pasties are baked – one of the features setting a salteña apart from any other South American empanada is the juices running down your arm as you bite into it. 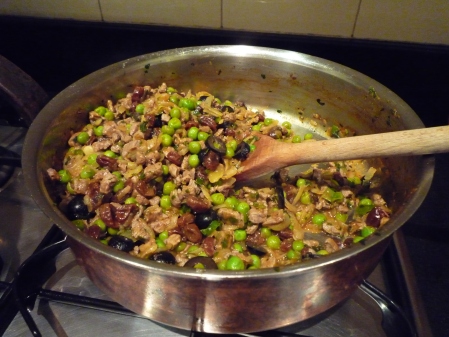 The other distinctive feature of the salteña is the braided seam (repulgue in Spanish) which looks very much like a Cornish pasty crimp. By rights, this should run across the top of the pasty, but as a beginner, I went for a slightly easier side seam. This was my first attempt at braiding the repulgue achieved following the instructions I found here. It’s trickier than it looks and I’ve a way to go before I can emulate the flying fingers of a Bolivian cook. The seams did the trick though and didn’t burst during baking. 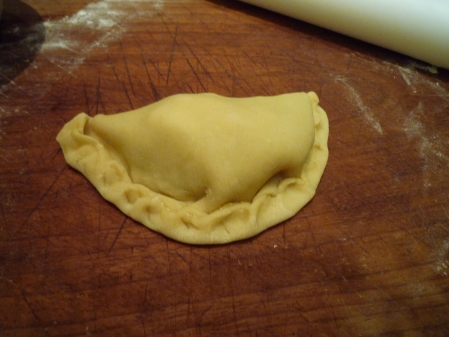 The pastry for this recipe breaks all the rules (keep everything cool, don’t overwork etc) as after rubbing the butter into the flour, the pastry is mixed with practically boiling water straight from the kettle and is then given a thorough knead for 3 minutes or more. The end result is a structural pastry that contains the juicy filling but is nevertheless crisp and delicious. Much better than a true shortcrust would be and I’m going to be using it again for pasties.

A breakfast to ensure that EVERYONE’S HAPPY.

I managed to shoehorn in a whopping twelve of Simon Beaufoy’s screenplays but these three defeated me: “Miss Pettigrew Lives for a Day”, “Yasmin” and “This is Not a Love Song”. Frankly these would challenge anybody and his two listed projects in development “Sharp Teeth” and “Catching Fire” would have been a doddle to incorporate. Must try harder… anyway, here are the all-important recipes:

Adapted from a recipe contributed by “happymommyx4” which I found on Allrecipes.com.

I’ve adjusted the quantity of filling as I found the original recipe gave too much filling for the pastry. I’ve converted all the US measurements into European ones, simplified a couple of steps and have tinkered with the seasoning to up the flavour as my first attempt was a little bland for my taste.

400g plain flour
1 tablespoon caster sugar
1/2 teaspoon salt
110g butter, cubed
150ml hot water (a little more may be necessary to obtain a workable pastry)
beaten egg whisked with a teaspoon each of paprika and salt to seal and glaze

Begin by making the filling.

Set the sheets of gelatine in cold water.

Heat the olive oil in a large frying or sauté pan over medium heat. Add the onion and cook until translucent but not coloured, about 5 minutes. Turn up the heat and add the minced beef and cook for a further 10 minutes reducing the heat if necessary. Spoon off any excess fat.

Stir in the grated potatoes, peas, parsley, sugar, seasoning and water, stir together and simmer for a minute or so. Remove from the heat. Push the filling to one side of the pan leaving a pool of free liquid. Add the soaked gelatine sheets to this liquid and stir until dissolved. Stir everything together and set aside to cool completely. Once cool, mix in the olives, raisins and chopped hard-boiled egg.

Next make the pastry. Combine the flour, sugar and salt in a large bowl and stir well. Rub in the cubed butter with your fingertips until the mixture resembles breadcrumbs. So far, so normal. Now for the unconventional bit. Slowly add the hot water, mixing with a knife. You may need a little more water than the 150ml suggested. On a lightly floured surface knead the pastry for about 3 minutes until smooth. Divide the pastry into eight balls, either by eye or by weight if you want them all to be evenly sized. Cover the pastry balls with cling film and keep them warm while you work with the first pastry ball.

Preheat the oven to 220 degrees C.

On a lightly floured board, roll the pastry ball into a circle approximately 1/8 inch thick. Don’t make the pastry too thin as it will allow the filling to break through while it bakes. Brush egg wash carefully around the rim of the pastry circle. Place approximately 2 tablespoons of the meat filling on one half of the pastry circle and carefully fold over the free half of the pastry and press gently to seal. Crimp the pressed border either by pressing the tines of a fork around the edge or, more authentically, by braiding the edge scallop-fashion to form The Repulgue as it’s known in Spanish.

Place the salteña on a baking sheet lined with parchment.

Continue with the remaining pieces of pastry until you have 8 salteñas. Glaze with the egg wash and bake in an oven preheated to 220 degrees C for 15-20 minutes or until golden brown.

Adapted from a recipe from http://www.boliviabella.com

Soak the purple corn flour in 720ml cold water for at least 2 hours, or oevrnight if you’re preparing it for breakfast.

While the corn flour soaks, bring the additional litre of water to the boil in a medium saucepan, throw in the cinnamon, cloves and orange peel, remove from the heat, cover and leave to infuse.

When you are ready to complete the drink, add the soaked corn flour and its soaking liquid to the litre of flavoured water along with the sugar and bring to the boil stirring constantly with a wooden spoon. Taste and add more sugar if you like.

To serve, ladle into drinking bowls and top with the chopped pineapple and a little orange zest.

You are currently reading THE FULL MONTY: breakfast from Bolivia at The Rhubarb Fool.