Looking at the map of Bosnia and Herzegovina, I was taken aback by how familiar the names some of the larger towns were – Banja Luka once known for its tree-lined boulevards, Mostar similarly for its iconic bridge and the cultured and elegant capital city of Sarajevo. An unfortunate legacy of the Bosnian war of the 1990s is that all these cities are now best known for the war atrocities committed there.

April 2012 was the 20th anniversary of the start of the Siege of Sarajevo which lasted from 1992 until almost 4 years later, 29 February 1996, the longest siege of a capital city in modern warfare. This added a certain resonance to our breakfast.

On the menu was the ultimate Bosnian street food, burek, written about most engagingly here http://horinca.blogspot.co.uk/2009/06/burek-bosnias-gift-to-breakfast.html

Burek, a savoury filling encased in paper thin pastry is known across Eastern Europe and around the Mediterranean under various names – börek, bourek, böregi, bouréki, a legacy of the Ottoman empire. The Turks occupied Bosnia for more than 400 years (1463-1878) and their legacy remains many ways including their food.

Emigré Bosnians yearn for a dollop of kajmak a Balkan version of clotted cream cheese to serve alongside their burek. If you fancy having a go, the instructions here http://saltandfat.com/post/9168043369/kajmak look admirably detailed. We cheated and ate our burek with a spoonful of thick plain yoghurt instead.

I give the full burek recipe below though I chose not to make my own filo/strudel pastry on this occasion.

Preparing the meat filling is a simple job if you use a food processor. It comprises minced beef, onion, a liberal quantity of paprika and beaten egg to hold it all together.

Making the burek is a little bit like creating an enormous sausage roll: 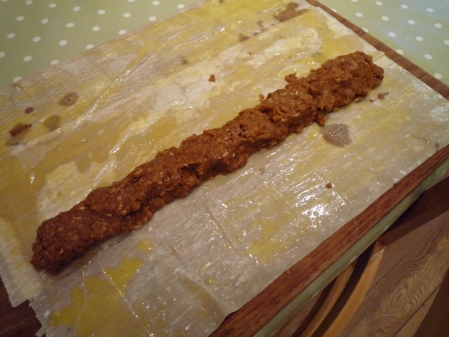 The next step is coiling up the roll ready to bake: 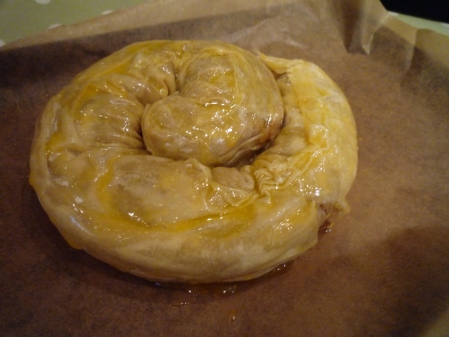 One baked the burek are best cooled on a rack to avoid a soggy bottom: 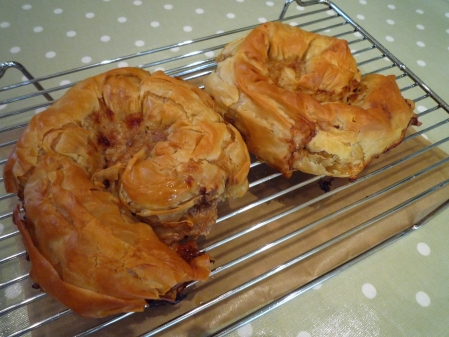 Finally the burek is sliced and ready to eat. 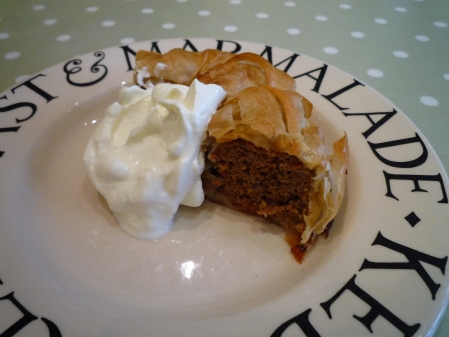 Adapted from this recipe http://www.whats4eats.com/meats/bosanski-burek-recipe

I chose not to make my own filo/strudel pastry as the original recipe suggests. Instead I bought a pack of ready made filo. Jus-rol brand is readily available in UK shops and a pack of pastry contains 6 sheets and weighs 270g.

The recipe makes 3 medium sized burek rolls like the ones in my pictures above.

Begin by making the simple filling. Put all the filling ingredients into the bowl of a food processor and pulse until combined and the mixture is very finely chopped but not reduced to a mulch with no texture. If you prefer not to use a food processor, make sure the onions are very finely chopped or even grated and mix all the ingredients together thoroughly in a large bowl using a wooden spoon or your hands. Set the prepared filling aside.

Next, get everything ready to shape and bake the bureks. Make sure your melted butter has cooled a little and that you have a pastry brush to hand. Lay out your pastry and workboard and have either a clean damp teatowel or some clingfilm to hand to cover the filo you’re not working with. Line three baking sheets with baking parchment, one for each burek. Finally, preheat your oven to 170 degrees C (fan). You need to be organised before you begin as the filos sheets are so thin that they dry out very quickly and crack and become difficult to roll up unless you keep them covered.

Spread one filo sheet onto your pastry board, long side facing you ie landscape rather than portrait orientation. Brush it liberally with melted butter. Lay a second sheet the same way partly overlapping first one by about one third. Brush this one with melted butter too.

Take one third of the filling and, leaving a 7cm border at the top and a 3cm border at each end, spread it out in a long rough sausage shape. Fold over the top border and continue rolling up into a long sausage roll shape. Pinch the ends to seal, brush the roll with melted butter and coil it into a rough spiral. Lift gently and place on the prepared baking sheet.

Complete the other two bureks in the same way.

Bake in the preheated oven for 35 to 45 minutes until golden brown and cooked through.

You are currently reading Bosnian breakfast at The Rhubarb Fool.