Shortbread is the classic British, or more properly Scottish, biscuit. With just three ingredients, flour, butter and sugar balanced in the baker’s golden ratio of 3:2:1 it’s sublime in its simplicity, the perfect riposte to an oversized cookie or indeed the overworked esoterically flavoured creations on offer on our TV screens at the moment courtesy of the Great British Bake Off.

Shortbread is relatively straightforward to make at home (though as I have discovered there are several ways to go wrong) but you can buy great shortbread too. One of my favourite commercially produced shortbreads is that made by Dean’s of Huntly. On a visit to Aberdeenshire not so long ago (mainly focused on sampling Speyside whiskies) we found ourselves in the small town of Huntly and took the opportunity to visit the factory showroom and café, learning the story of how Helen Dean started baking and selling shortbread from her family kitchen in the early 1970s. Dean’s shortbread truly is melt-in-the mouth and the list of ingredients for the premium all-butter shortbread is admirably simple. 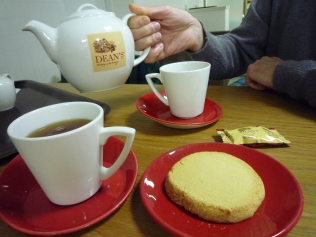 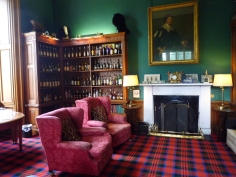 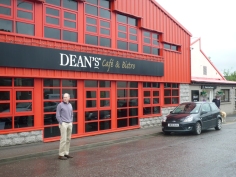 So if Dean’s sets the benchmark, where does my own shortbread recipe come from?

It’s a combination of various different recipes plus a little trial and error.

In contrast to the brevity of the ingredients list, there are a number of aspects to the method for making and baking of shortbread that warrant a little further discussion or explanation.

I referred above to the baker’s golden ratio of 3:2:1. Where does this come from you may be wondering?

I have 3 unimpeachable sources. The first is my mother-in-law’s handwritten recipe which calls for 6oz flour, 4 oz butter and 2 oz sugar (incidentally this is also what she does to make the best crumble topping); the second is Jane Grigson’s shortbread instructions from her book “English Food” (sorry Scotland!); the third is a classic shortbread recipe attributed to Katharine Robertson from the book “Seasonal Cooking” by Claire MacDonald of MacDonald who runs a famous hotel, Kinloch Lodge on the Isle of Skye.

2) Substituting some of the flour for cornflour, semolina or ground rice

The received wisdom seems to be that you can substitute up to one third of the plain flour with one of the above alternative starches. I have found that shortbread made with just plain flour has an amply crumbly and melt-in-the mouth texture if properly baked so why make things more complicated than they need to be?

3) What sort of butter is best?

I like to use a salted British butter, ideally a farmhouse one as this gives the best flavour to the finished biscuit. I think a little salt in the recipe lifts the flavour and if this is added by way of salted butter there is no danger of over-salting the dough. British butter is generally made from straightforward pasteurised cream and is known as “sweet cream” butter. Butter from the continental mainland e.g. Lurpak or the many French butters available are generally made from cream that has undergone lactic fermentation. This gives butter with a fresh, clean flavour but for shortbread making I prefer the richer taste of a sweet cream butter.

4) What sort of sugar is best?

Some recipes call for icing sugar but as far as I’m concerned, caster sugar is the way to go helping to achieve the desired crumbly texture. I also think that golden caster sugar gives an extra depth of flavour to the finished biscuit.

5) How should the ingredients be combined?

Some recipes suggest rubbing in the butter, flour and sugar whereas others suggest creaming together the butter and sugar and then working in the flour. I’ve tried both methods and find that it makes no difference. I find it easiest to start by creaming the butter and sugar in my Kenwood mixer and I was pleased to see that the legendary Helen Dean started off her family shortbread-making business using a trusty Kenwood mixer (proudly on display at the company’s HQ in Huntly – see photo above) so I feel I’m on solid ground here.

Several recipes suggest rolling out and cutting shortbread dough into shapes. Good luck to you if you can manage it! There is no way I’d attempt to roll out this type of dough as I find it just to hard to work with which is why I press my dough into a tin and cut it into fingers when baked. There are other recipes available for crisp little sablé-type biscuits that contain either egg yolks or whole eggs which are more suitable for rolling-out and cutting into shapes if that’s what you’re looking to make.

7) How long to bake and at what temperature?

Different recipes contain vastly different instructions on this aspect. As far as I’m concerned, relatively low and slow is the way to go which is why I suggest a baking temperature of 150 degrees C fan and 45 minutes’ cooking time. If you like a paler shortbread you might consider dropping the oven temperature by a further 10 degrees – Claire MacDonald’s recipe referred to above calls for a conventional oven temperature of 150 degrees C and a baking time of 1 hour. 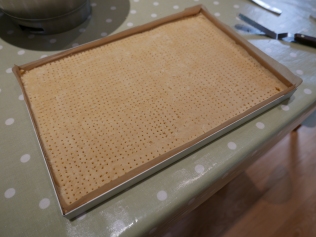 Makes enough to fill a standard rectangular Swiss roll tin (mine is 33cm by 23cm by 2cm) which when cut into fingers yields 36 individual biscuits. The ratio of flour to butter to sugar is the simple to remember 3:2:1 so you can readily alter the quantities to suit whatever tin size you have.

Line the tin using a sheet of baking parchment carefully trimmed to fit. I do this by cutting a sheet of parchment slightly larger than my tin, pressing it into the tin to mark the division between base and sides then carefully snipping the paper at each corner at right angles then folding in the sides origami-style to create a 3D lining. If this sounds too complicated then just line the base of the tin.

Making the shortbread dough is easily done in a stand mixer but works well using a large bowl, wooden spoon and some elbow-grease too.
Cream together the butter and caster sugar thoroughly until the mixture is a little lighter in colour. Add the flour in 3 or 4 stages, mixing until well incorporated. The end result should be a crumbly dough that barely holds together and looks like badly made shortcrust pastry.

Tip the dough into the lined tin and spend a few minutes carefully pressing and distributing the dough evenly in the tin. You can do this using any combination of your knuckles and fingertips, a metal spoon or a small crank-handled palette knife. Prick the dough all over with the tines of a fork. I think this helps the dough to bake through more evenly, it looks attractive and importantly creates tiny pockets in the baked surface allowing the final sprinkling of caster sugar to adhere better to the biscuits.

When you are ready to bake, preheat your oven to 150 degrees C fan. Bake the shortbread for about 45 minutes until a light golden colour throughout. Judging the right degree of baking is perhaps the hardest aspect of this recipe and will probably require a degree of trial and error depending on how accurate your oven temperature is. It shouldn’t be too dark a colour – baking long and slow is the way to go. Also, if the shortbread is baked too long it becomes too hard and brittle and will shatter when cut into. If underbaked it will lack flavour and have a claggy rather than melt-in-the-mouth crumbly texture. When it is baked just right it will still be somewhat soft when cut into while still warm but, fear not, it will firm up to the right crumbly texture when cooled.

Once baked, remove from the oven, immediately carefully cut into fingers of the desired size (I cut mine lengthwise into 3 long strips then crosswise into 12 strips to produce 36 fingers) and sprinkle the surface with a little more golden caster sugar. Leave to cool completely in the tin.

The latest in our Breakfasts of the World Project series. It’s been a while but I think the muse is back…

The Republic of Chad is a landlocked country in Northern Central Africa named after the great freshwater lake on its Western border. It is a huge country in terms of land area (the fifth largest in Africa) but with a relatively small population of some 14 million.

It was part of French Equatorial Africa until 1960 when the country declared independence from France. The capital city is N’Djamena and French and Arabic are the official languages. Confusingly, Chad’s flag of vertical blue, yellow and red stripes is identical to that of Rumania, a source of low level diplomatic tension unlikely to be resolved any time soon.

Chad has experienced vast numbers of refugees flooding across its border with Sudan since 2003 as a result of the Darfur conflict. More recently there have been further waves of refugees crossing its Western border fleeing civil war in the Central African Republic.

The UNHCR publishes copious detailed reports of its work with refugees in Chad that are probably not as widely read as they should be. Looking at these reports, I was struck by the pictures of refugees eking out a meagre living selling street food. My Chadian breakfast took inspiration from these resilient street food vendors and comprised sweet millet fritters plus the ubiquitous “jus de fruit” which is in fact a simple mango smoothie. The helpful Chad information website where I found both recipes says that many small businesses have started up throughout Chad based on selling this one popular drink.

Millet is a staple grain from this part of Africa and grows successfully in hot arid conditions but is relatively unknown in more temperate climates except as bird seed. The grains are like tiny creamy seed pearls and grind down to a yellowish, mild, slightly nutty tasting flour. It’s naturally gluten free and perhaps as a consequence quite hard to handle and my millet fritters were something of a disaster. This is what the first deep-fried batch looked like after cooking:

I had to abandon the deep fat fryer and ended up shaping my millet dough into shortbread-style fingers before oven baking. Perhaps these would have turned out better if I’d been able to use freshly ground local millet flour as the recipe specifies rather than a bag of Bob’s Red Mill US grown millet flour.

It’s also possible that my proportions were wrong as I used US cups i.e. 8 fl oz measures whereas the measure used in the original recipe was a “verre” i.e. a glass. Who knows what that might be but I suspect it may be smaller than 8 fl oz.

At least the mango smoothie turned out well – I’d happily drink this for breakfast anytime and the addition of the powdered cardamom adds an extra flavour dimension.

Crush the ice in the blender . Peel and cut up the mango and put the fruit chunks into a mixer.  Blend the mango in the mixer.  Add the milk, sugar and cardamom to the mixer and blend well.  Serve immediately.

Millet fritters from the Ouaddaï

Mix the millet and wheat flours together. Heat the cup of vegetable oil to hand-hot and pour it over the flour mixture. Mix roughly. Whisk together lightly with a fork the sugar and egg and pour over the dough. Knead the dough for 5 minutes until it becomes firm and smooth.

Roll the dough to a thickness of 5 millimetres on a lightly floured board and cut into ribbons.

Fry to a golden brown in the peanut oil at about 150 degrees C. Drain the fritters on kitchen paper and serve hot, warm or cold.

You are currently viewing the archives for September, 2016 at The Rhubarb Fool.