The latest in our Breakfasts of the World Project series. It’s been a while but I think the muse is back…

The Republic of Chad is a landlocked country in Northern Central Africa named after the great freshwater lake on its Western border. It is a huge country in terms of land area (the fifth largest in Africa) but with a relatively small population of some 14 million.

It was part of French Equatorial Africa until 1960 when the country declared independence from France. The capital city is N’Djamena and French and Arabic are the official languages. Confusingly, Chad’s flag of vertical blue, yellow and red stripes is identical to that of Rumania, a source of low level diplomatic tension unlikely to be resolved any time soon.

Chad has experienced vast numbers of refugees flooding across its border with Sudan since 2003 as a result of the Darfur conflict. More recently there have been further waves of refugees crossing its Western border fleeing civil war in the Central African Republic.

The UNHCR publishes copious detailed reports of its work with refugees in Chad that are probably not as widely read as they should be. Looking at these reports, I was struck by the pictures of refugees eking out a meagre living selling street food. My Chadian breakfast took inspiration from these resilient street food vendors and comprised sweet millet fritters plus the ubiquitous “jus de fruit” which is in fact a simple mango smoothie. The helpful Chad information website where I found both recipes says that many small businesses have started up throughout Chad based on selling this one popular drink. 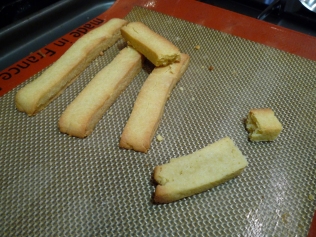 Millet is a staple grain from this part of Africa and grows successfully in hot arid conditions but is relatively unknown in more temperate climates except as bird seed. The grains are like tiny creamy seed pearls and grind down to a yellowish, mild, slightly nutty tasting flour. It’s naturally gluten free and perhaps as a consequence quite hard to handle and my millet fritters were something of a disaster. This is what the first deep-fried batch looked like after cooking:

I had to abandon the deep fat fryer and ended up shaping my millet dough into shortbread-style fingers before oven baking. Perhaps these would have turned out better if I’d been able to use freshly ground local millet flour as the recipe specifies rather than a bag of Bob’s Red Mill US grown millet flour.

It’s also possible that my proportions were wrong as I used US cups i.e. 8 fl oz measures whereas the measure used in the original recipe was a “verre” i.e. a glass. Who knows what that might be but I suspect it may be smaller than 8 fl oz.

At least the mango smoothie turned out well – I’d happily drink this for breakfast anytime and the addition of the powdered cardamom adds an extra flavour dimension.

Crush the ice in the blender . Peel and cut up the mango and put the fruit chunks into a mixer.  Blend the mango in the mixer.  Add the milk, sugar and cardamom to the mixer and blend well.  Serve immediately.

Millet fritters from the Ouaddaï

Mix the millet and wheat flours together. Heat the cup of vegetable oil to hand-hot and pour it over the flour mixture. Mix roughly. Whisk together lightly with a fork the sugar and egg and pour over the dough. Knead the dough for 5 minutes until it becomes firm and smooth.

Roll the dough to a thickness of 5 millimetres on a lightly floured board and cut into ribbons.

Fry to a golden brown in the peanut oil at about 150 degrees C. Drain the fritters on kitchen paper and serve hot, warm or cold.

You are currently reading Breakfast from Chad at The Rhubarb Fool.