The yurt phenomenon shows no sign of going away: they seem to be springing up like a rash all over the place even in Langdale and the Forest of Bowland in my far flung neck of the woods.

We saw a night in a yurt advertised by the Montreux & Vevey tourist office during our recent visit to Switzerland and decided it might be fun to give it a try. We booked from the UK using the train company Goldenpass’s (the rebranding of what was formerly known as the MOB, Montreux Oberland Bernois railway presumably to appeal to English speaking tourists) efficient website.

The yurts are perched on the summit of the Rochers de Naye high above Montreux, and, bar a 5 hour hike, the only way up is on a little rack and pinion railway. We duly boarded our train late on Thursday afternoon and 50 minutes later we were in swirling mist on the summit. So much for the promised spectacular views… 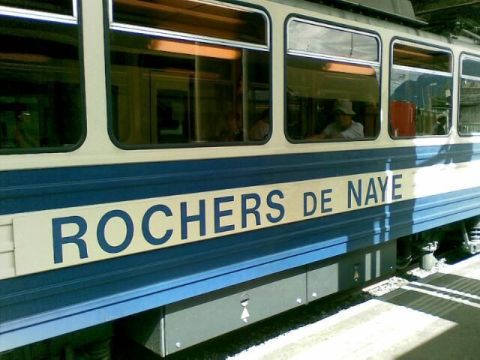 We inspected our allocated yurt no. 3 first outside: 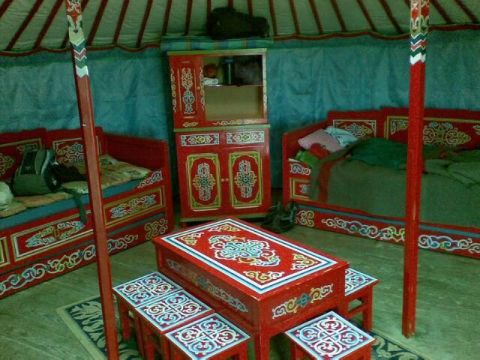 There was little team enthusiasm for a short walk so Tim and I explored the vicinity whilst the boys were kept entertained by the little marmot zoo just below the summit.

Dinner was served at 7.00 in the transformed self-service restaurant. We gathered at the varnished pine tables for a prosecco apéritif along with 6 other parties, mainly Swiss family groups celebrating children’s birthdays. There was a simple menu choice between cheese or Mongolian meat fondue. It had to be the Mongolian fondue for us. A bubbling cauldron of evil-looking black liquid was shortly presented, along with a vast plateful of meat – a mixture of chicken breast and, bizarrely, ostrich. This would be a first in two counts, both my first Mongolian meal (though I do have a vague recollection of Mongolian barbecue establishments being the latest thing back in London in the 1980’s) and my first taste of ostrich: 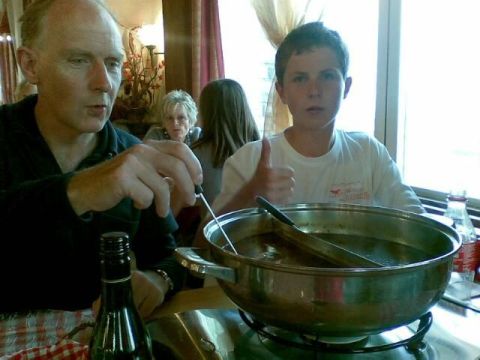 The evil black liquid turned out to be a fiercely salted and spicy broth spiked with pieces of leathery fungus. This was clearly a variant on the more usual Fondue Chinoise. We were spared having to drink the broth afterwards which is what usually happens once all the meat from a Fondue Chinoise has been cooked.

Pudding was a crème caramel served in self-service coffee cups. To complete the meal, I couldn’t resist the offer of some Vieille Prune Action, which turned out to be a surprisingly mellow Swiss plum brandy.

After the New Year’s Eve feast (see previous post) it was our turn to rustle up a meal for 14 (6 adults, 8 children) on New Year’s Day. We’d prepared in advance by doing all the shopping, except for the salad ingredients, in Switzerland. Even the bread came from a lovely bakery in Zürich airport terminal. Swiss wine, an essential component of the meal, would have been too heavy to carry so we’d arranged an advance delivery to our hosts’ address by UK wine merchant Nick Dobson Wines. Nick is a man after my own heart who specialises in wines from Austria, Switzerland and Beaujolais. I’ve bought a number of items from him over the years both for home consumption and as gifts and he’s been really efficient, helpful and knowledgeable every time, plus supplied some really enjoyable wines so I would definitely recommend him if you are looking for something unusual. I give his contact details below at the end of this post.

Our Swiss themed menu was:

We indulged in a bit of judicious cheating (or careful purchasing depending on your point of view!) and brought back from Klosters a bag of ready grated weighed and blended cheese for the fondue and the Nusstorte too.  I give recipes both for cheese fondue and Nusstorte below if you want to have a go at home. Both recipes have been tried and tested more than once back home in the UK.

Our Bündnerfleisch came from an artisanal manufacturer in Klosters, a little shop on the main Landstrasse road close to the Heid ski lift.  Bündnerfleisch is salted and cured meat, usually beef but we bought the venison version as well – similar but darker red with a background gamey flavour.  The raw meat is first salted and mixed with a secret recipe of herbs and spices before being hung up to dry for several weeks.  The meat is then pressed into a distinctive rectangular shape before being very thinly sliced and served.  Bündernerfleisch is similar to the better known Italian bresaola which itself comes from the nearby Valtellina.

The people who run the Klosters business very kindly showed me round their processing and drying rooms where I was able to sea the beef pieces maturing slowly in the rafters:

You can read more about Bündnerflesich by following this link: http://www.grischuna.ch/productsE.html. I just wish we could get hold of it more readily over here as it’s delicious.

This was a really easy meal to feed a crowd of people, fun for both grown-ups an children.  Neither the truly authentic Bündnerfleisch nor a pre-prepared Nusstorte are readily available here but you could easily substitute a platter of  other cured meats and procure a tart from your local bakery to recreate the idea.  Here is the grown-ups’ table (the riotous childrens’ table is just next door).

And here’s the beautiful Nusstorte fresh (well almost) from Charly’s in Klosters: 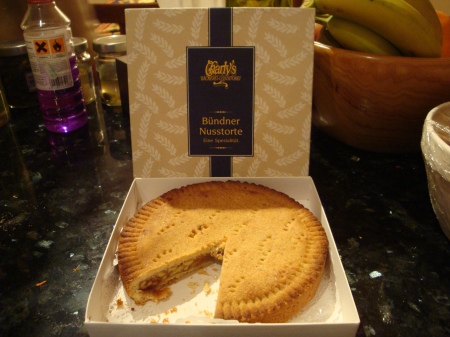 Recipe for cheese fondue “moitié-moitié” (half and half)

This recipe comes from my trusty little Betty Bossi Swiss Specialities cook book, a little ringbound volume with one recipe per page, clear simple and instructions and a photo of every dish.  The half and half in the recipe title refers to the mixture of 2 cheeses used in this fondue.  This recipe serves 4 people generously.

600g day-old bread from a cob or chunky baguette type of loaf (you need the right ratio of crust to crumb – a tin loaf would give too much crumb) cut into cubes
300g mature gruyère cheese
300g vacherin fribourgeois cheese (substitute emmental if vacherin fribourgeois is not available)
300 ml white wine, ideally a Swiss chasselas, otherwise whatever dry white wine you have to hand
1 peeled clove of garlic left whole
1 small glass (liqueur glass) of kirsch
1 tablespoon cornflour
a pinch each of freshly ground black pepper, paprika, freshly grated nutmeg

Grate the cheese using a coarse grater and place into the fondue pan. A traditional fondue pan is referred to as a caquelon.  If, like me you bought a ready grated fondue mix of cheeses, simply tip the contents of the packet into the fondue pan. In a separate bowl, mix together the cornflour and white wine.  Pour the mixture over the cheese in the fondue pan.  Place the pan over a low heat and slowly bring the mixture up to boiling point, stirring constantly with a wooden spoon.  Add the whole garlic clove, kirsch and seasoning to the mix.  Once the mixture is smooth, creamy and bubbling, bring the fondue pan to the table and set your table burner on low.  You are now ready to serve.  Give the bottom of the pan a stir every so often with a bread cube on the end of your skewer to stop the cheese crust which forms on the base (known as la religieuse) from burning.

This recipe comes from a little ringbound paperback “Bündner Landfrauen Kochen” (Graubünden farmers’ wives cookbook) and was submitted both by Mrs Annina Mengiardi of Ardez (Swiss German version) and by Mrs Marta Padrun of Lavin (Romansch version) so it is certainly authentic.  My Romansch is limited but as far as I can tell, the recipes are identical. The translation from Swiss German is mine as are one or two additions. I’ve made the recipe twice now so can confirm that it works.  The sweet pastry dough is a little difficult to handle so be gentle with it. Caramelising the sugar for the filling has to be done carefully as well. The key thing is to seal in the filling thoroughly otherwise it bubbles out when baked.  A small slice of the pie is enough so on that basis the recipe would serve 12 people. It’s usually served on its own without cream or ice-cream and is just as good with a cup of tea or coffee as it is for pudding. I wonder if this is the European precursor to the American pecan pie?

Rub the butter into the flour to which you have added the pinch of salt until it resembles fine breadcrumbs. Stir in the sugar then the beaten egg and work into a dough handling as lightly as you can. Wrap and chill the dough for half an hour.  Roll out 2/3 of the dough and use it to line a loose bottomed flan tin 24-26cm in diameter. Do not trim the excess pastry as you should aim to leave an overlap of 3 cm. Wrap and return the remaining pastry dough to the refrigerator while you prepare the filling.

For the filling, melt together the sugar and water in a heavy based saucepan and allow to caramelise to a brown colour. Add the chopped walnuts, cream and honey, stir well and allow to cool to room temperature.

Fill the pie base, then roll out a lid and place it over the tart.  Seal the edges well.  I recommend leaving the pie edges untrimmed at this stage as you can neaten up the edges after baking.  Prick the surface with a fork all over decoratively if you like (see picture above) but don’t overdo it as the filling will leak out.

Bake at 220 degrees C for the first 10 minutes then reduce the heat to 180 degrees C and bake until the tart is a light golden brown (approx another 30 minutes.

You are currently browsing entries tagged with fondue at The Rhubarb Fool.