The yurt phenomenon shows no sign of going away: they seem to be springing up like a rash all over the place even in Langdale and the Forest of Bowland in my far flung neck of the woods.

We saw a night in a yurt advertised by the Montreux & Vevey tourist office during our recent visit to Switzerland and decided it might be fun to give it a try. We booked from the UK using the train company Goldenpass’s (the rebranding of what was formerly known as the MOB, Montreux Oberland Bernois railway presumably to appeal to English speaking tourists) efficient website.

The yurts are perched on the summit of the Rochers de Naye high above Montreux, and, bar a 5 hour hike, the only way up is on a little rack and pinion railway. We duly boarded our train late on Thursday afternoon and 50 minutes later we were in swirling mist on the summit. So much for the promised spectacular views…

We inspected our allocated yurt no. 3 first outside: 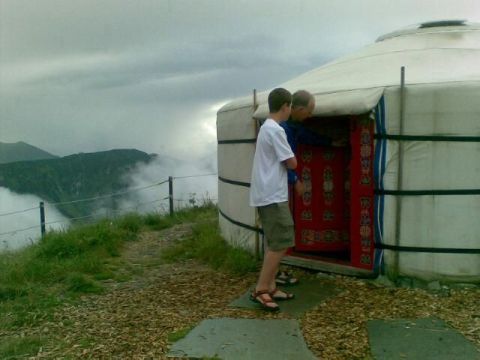 There was little team enthusiasm for a short walk so Tim and I explored the vicinity whilst the boys were kept entertained by the little marmot zoo just below the summit.

Dinner was served at 7.00 in the transformed self-service restaurant. We gathered at the varnished pine tables for a prosecco apéritif along with 6 other parties, mainly Swiss family groups celebrating children’s birthdays. There was a simple menu choice between cheese or Mongolian meat fondue. It had to be the Mongolian fondue for us. A bubbling cauldron of evil-looking black liquid was shortly presented, along with a vast plateful of meat – a mixture of chicken breast and, bizarrely, ostrich. This would be a first in two counts, both my first Mongolian meal (though I do have a vague recollection of Mongolian barbecue establishments being the latest thing back in London in the 1980’s) and my first taste of ostrich:

The evil black liquid turned out to be a fiercely salted and spicy broth spiked with pieces of leathery fungus. This was clearly a variant on the more usual Fondue Chinoise. We were spared having to drink the broth afterwards which is what usually happens once all the meat from a Fondue Chinoise has been cooked.

Pudding was a crème caramel served in self-service coffee cups. To complete the meal, I couldn’t resist the offer of some Vieille Prune Action, which turned out to be a surprisingly mellow Swiss plum brandy.

You are currently reading Fondue Mongolian style at The Rhubarb Fool.