My aunt who lives in Paris, Marjorie, was celebrating her 70th birthday with a Wild West party on Saturday 19 September and I decided to make a long weekend of it and take the opportunity to explore Paris.

I travelled to Paris in leisurely comfort taking the train all the way from our front door.  It takes longer than the plane but is a comfortable and relaxing way to travel. I hopped onto the metro, breathing in the distinctive smell it has and positively enjoying the bustle and excitement of Paris.  I checked into my cheap (for Paris..) and cheerful hotel, the Vendôme on the Rue d’Arras on the Left Bank and was very touched to find that husband Tim had thoughtfully sent a bouquet of flowers to the room. 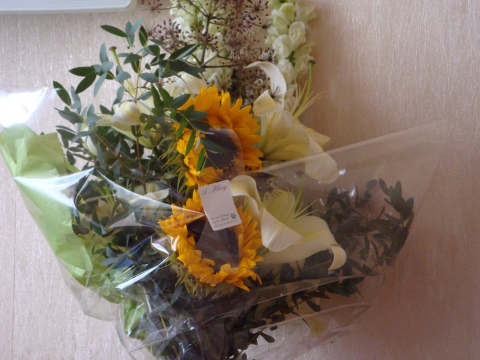 There was just time to unpack, bathe and change before setting out to that evening’s destination, Restaurant Hélène Darroze on the Rue D’Assas, also on the Left Bank, a couple of metro stops away.  You may have guessed that I thought my hotel was on the same street as the restaurant but I didn’t check carefully before booking and confused rr with ss.  Never mind, I was approximately in the vicinity and the exercise did me good.

I was amused to catch on the TV in my room a few minutes of “Un Dîner Presque  Parfait” (an almost perfect dinner) a reality TV show which is evidently the French equivalent of “Come Dine With Me”. The French contestants had taken the whole thing a lot more seriously than we do in the UK: in this week’s episode filmed in the lakeside mountain town of Annecy, hostess with the mostest Carole had recreated an alpine meadow by turfing over her dining table with real grass onto which were dotted toy animals and artificial flowers.  You can check out the latest episode of the show here:  http://undinerpresqueparfait.m6.fr

Suitably refreshed and in the mood for dinner after watching the lovely Carole prepare foie gras for her guests, I set out for Restaurant Hélène Darroze which is located on the discreetly  affluent Rue d’Assas just off the bustling Boulevard Raspail. 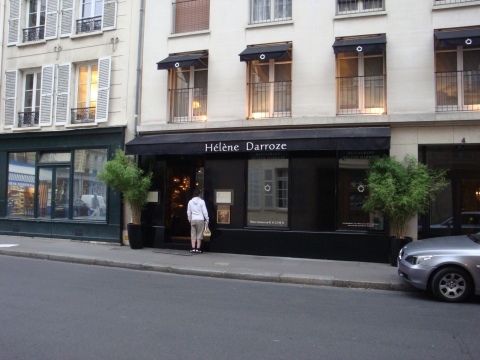 It felt good walking in through the sleekly dark doorway and being shown in the Salon, the less formal (and less expensive) way to sample to cooking here.  It had been surprisingly easy to book a table –  I had phoned and booked in the main restaurant just 10 days’ earlier without any difficulty.  A sign of the recession perhaps.  Plan A, dinner for two (me and Auntie Madge) in the restaurant, changed to Plan B, dinner for three in the salon when we realised Cousin Eileen was in town.  Eileen, like many members of my extended family has led a colourful life and is now married to a Turkish Cypriot and runs a beachside bar, The Soho Lounge, in a resort not far from Kyrenia.

As I was a little early and was the first to arrive, I settled down in the boudoir-like salon with a glass of Laurent Perrier rosé and took in the delicious sounding “Menu Tapas” realising with pleasure that there were no difficult decisions to make as all of these dishes would be served up during the course of the evening.  The salon décor is a mix of funky minimalism (citrus green walls and dinky dark wood dining tables) and Arabian nights glamour (screen of butterfly wings and jewel-coloured silk cushions).

The Tapas menu is shown in the photograph below, along with the mildly eye-watering price of Euro 88 per head (in fact not unreasonable for Paris given the number of different dishes and sheer quantity of skilful cooking involved – to put this into context, a single main course of sea bass at the Restaurant Jules Verne on the Eiffel Tower is also coincidentally Euro 88, a spotted on the menu during next day’s sightseeing) 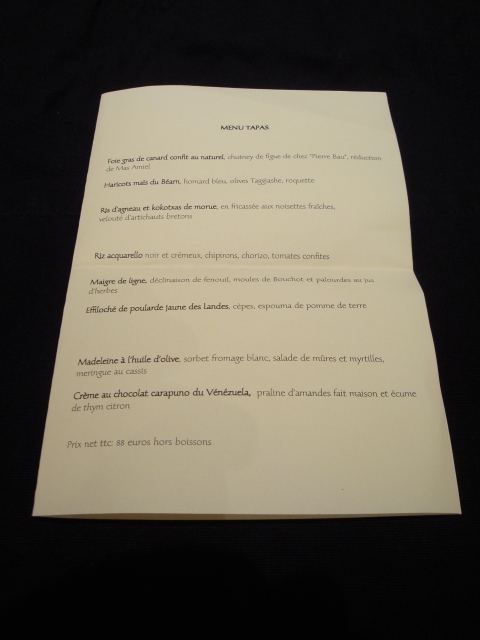 My fellow guests arrived and joined me in a glass of pink champagne.  The waiters (all good looking sharp suited young men) were gently flirtatious and were happy to take our picture.  Cousin Eileen is on the left, Auntie Madge in the middle and me on the right. 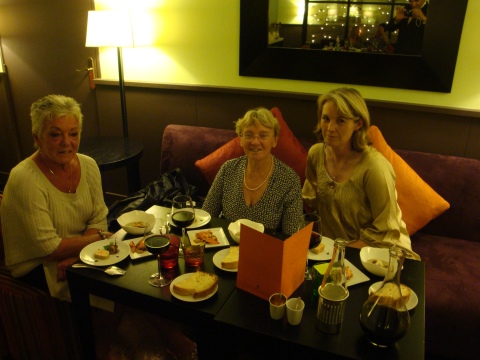 Why did I choose Restaurant Hélène Darroze?  Because she’d appeared as an example of a top-class Michelin-starred chef on BBC’s Masterchef last year and had stuck in my mind as being quietly competent and observing the highest standards in the kitchen.  I toyed with the idea of trying out Pierre Gagnaire’s restaurant but in the end thought I’d like to visit a restaurant run by a female chef.  She is now in her early 40s, at the top of her game and, like Angela Hartnett before her, has taken over the running of the restaurant of London’s flagship Connaught Hotel.

I knew next to nothing about Darroze’s style of cooking before visiting the restaurant so this was all a new discovery.  I now know that she is a native of Landes in South West France and this certainly showed in the cooking on the menu this evening.

The first course of 3 “tapas” comprised, transcribing from the photographed menu above:

Here’s what the dishes looked like when they arrived at the table: 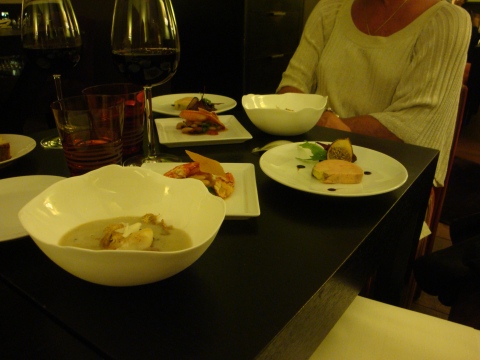 As you can see, all the dishes were served in tiny portions, just right for a greedy person like me.  I tend to like my plates and bowls round, finding the various square receptacles, wooden boards, jars and the like that modern chefs feel compelled to employ rather  faddish.  The delicate little shell shaped bowls that were used here were however rather lovely and suited the dainty nature of the food and portion sizes.  Wine glasses I recognised as Riedel and felt good in the hand.  We chose a Beaujolais (a Fleurie I think) as a cost effective and versatile wine which lasted all through the meal.

The course which stood out for me was the lamb sweetbreads – these were tiny morsels packed with flavour and were served with what the waiter informed us were the lower cheeks of a salt cod!  Obscure this ingredient may the cheek too were dainty and delicious and worked incredibly well with the lamb and the velvety artichoke purée.

These dishes are in the next photograph: 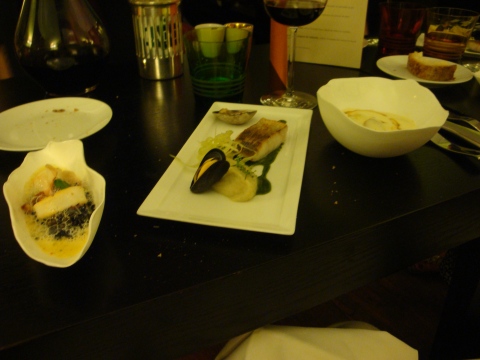 The rice dish was a refined take on the traditional Catalan black rice dish found on Barcelona restaurant menus, though Darroze prefers to use a type of Carnaroli rice from Italy as the waiter knowledgeably informed us.  Chipirons turned out to be baby squid.  The waiter was also helpful in explaining what maigre was – a fish native to the Atlantic Charentes Maritime coast, a little like a sea bass.  Whilst chatting to us, he also solved the mystery of what bar and loup de mer are – both sea bass but the former is the name used for fish from the Atlantic coast and the latter the name used for Mediterranean fish.

On returning home, I looked up maigre in my trusty Jane Grigson Fish Book and was delighted to find that it was in there – just a couple of sentences but there nevertheless – she is a woman you can count on. Apparently this fish is known in English as a meagre or a croaker and is a bit like a gurnard.  Hats off to Darroze for using something unusual and from her home region rather than the more obvious turbot or sole.

The menu French was getting a little up itself at this point – I mean, a declension of fennel!  This turned out to be fennel three ways with the purée turning out to be a revelation – I made a mental note to try this it at home.  And effiloché of chicken?  This seems to have something to do with knitting or crocheting but turned out to be a delectable miniature chicken shepherd’s pie with the espouma or cheffy foam of potato being the lightest mash imaginable.

Finally, on to the puddings.  These were: 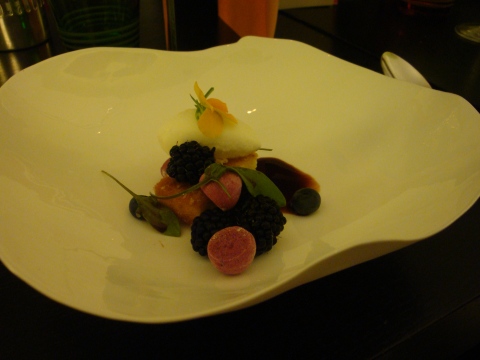 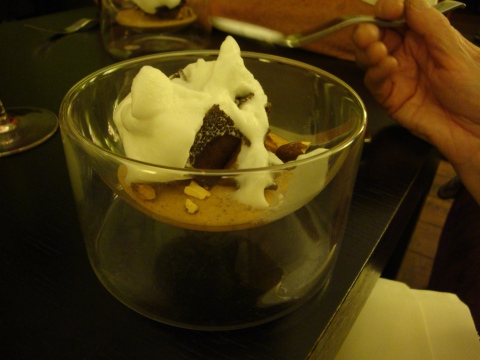 Both pretty as a picture and as good to eat as to look at.  Sorry to be a pedant (actually I’m not sorry really) but I think the menu should actually describe the chocolate as Carupano rather than carapuno. Arthur Knapp in his 2008 book “Cocoa and Chocolate” describes the criollo beans from this part of Venezuela as “the finest in the world”.  Nothing but the best for Darroze and they certainly made a heavenly mousse.  I was not sure about the combination of lemon thyme (in another of those modish foams) with chocolate but both Madge and Eileen enjoyed the contrasting tastes.  All this sounds positively gushing but it really was very good.  Searching round for something negative to say, the sound of heavy duty machinery from the open plan kitchen, probably employed in whipping up those foams, was perhaps the only (slightly) jarring note during the evening.

The dinky little madeleine was served with the most amazing mini blackcurrant meringues that exploded in the mouth like a refresher.  I would guess that they were not concocted from the usual egg white but from blackcurrant foam.  A touch of the Heston Blumenthal, and a little culinary magic to end the meal.

You are currently reading Weekend in Paris: Restaurant Hélène Darroze at The Rhubarb Fool.