A day in Paris with Clotilde Dusoulier

Well almost… Clotilde  Dusoulier is the woman behind www.chocolateandzucchini.com which began as a cult food blog describing her adventures in a Parisian kitchen.  Clotilde is now very much mainstream with a book deal and international press recognition the end result.

I’d read one of Clotilde’s articles describing a food lover’s tour of Paris in a copy of “Delicious” magazine two years ago.  I cut out and kept that article thinking it might well come in handy and so it finally did.  My aunt, who lives in Paris, chose to celebrate her 70th birthday this weekend with a Wild West party (more of this later).  This was the opportunity I needed to hop on the Eurostar and spend a day in Paris with Clotilde at my side.

I was staying on the Left Bank just off the Boulevard St Germain so Clotilde’s suggestion of a visit to Bread & Roses for breakfast fitted the bill nicely.  Bread & Roses is a bustling, bright bakery with a small café situated on a corner of the Rue Madame near the Jardin du Luxembourg.  I took a seat amongst the morning joggers, breakfast meeting businessmen and chic post-school run Parisian mothers and ordered breakfast. 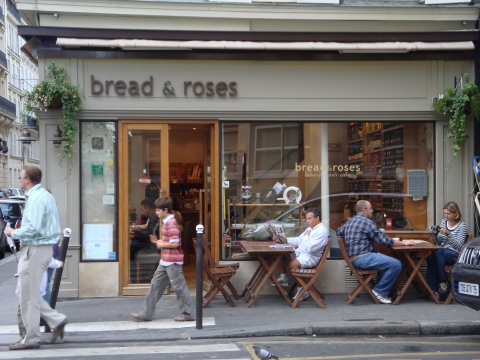 I chose freshly-squeezed orange juice, Darjeeling tea rather than coffee  (24 hours after leaving home I was longing for a decent cup of tea) and a whole Brioche a L’Ancienne.  What a wonderful breakfast!  Everything just perfect: the juice freshly squeezed in front of me, the tea freshly brewed from leaves rather than a bag far superior to anything I’ve had in the UK for ages, and the brioche to die for – pillowy soft and buttery.  I couldn’t finish it as you are given a whole loaf – it’s really designed for two people or more to share.  I ended up giving my other half to a tramp on the Boulevard St Michel. 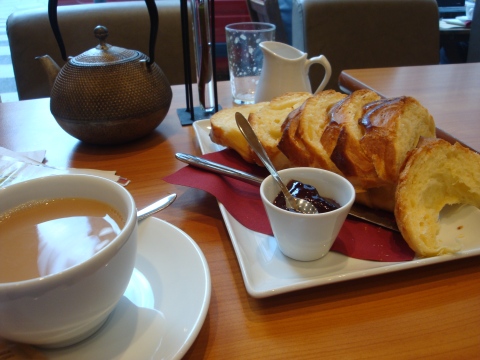 Set up for the day, it was time to visit a Parisian market.  Clotilde’s suggestion of the market on Avenue Président Wilson meant I could take in the Eiffel Tower: 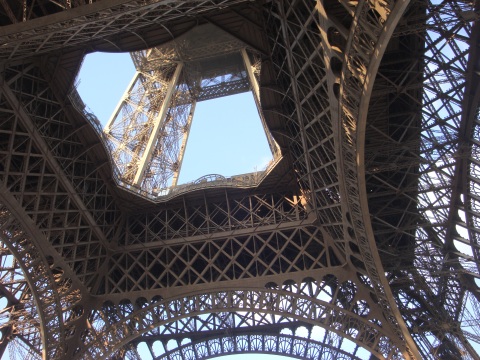 The market itself was more like an outdoor art installation rather than a place to buy food.  Fish, meat, cheese, charcuterie and fruit and vegetable stalls were lined up for a kilometre or so along the centre of the Avenue Président Wilson, all a feast for the eye.  I was arrested first of all by a magnificent swordfish: 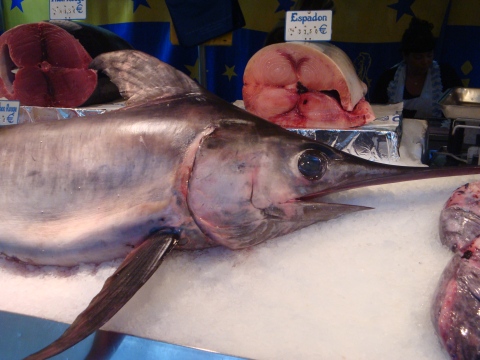 I was next stopped in my tracks by Joel Thiébault’s astounding vegetable stall.  Thiébault is France’s first celebrity greengrocer, a Gallic Greg Wallace if you can imagine that and I was pleased to see he was there in person sweet-talking customers.  Acres of greenery, rainbow chard, carrots in four different colours, all of them shouting Buy Me!  So I did – I bought a kilo of mixed tomatoes – no ordinary tomatoes but green ones, red ones, yellow ones, large, small, melon shape – some weird-looking purple potatoes and bunches of basil, chives and chervil.  I was banking on having the chance to throw together a couple of salads as my contribution to the Wild West party later that evening. 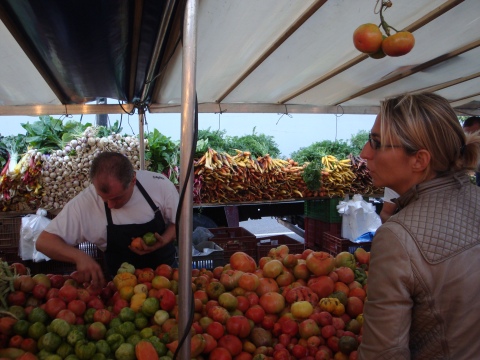 Reluctantly I left the market – after all I was on a tight schedule today – and headed back on the métro in a southerly direction  heading for food shop Beau et Bon which describes itself as “l’épicerie folle”.  Intriguing.   Walking along the rue des Volontaires heading for the rue Lecourbe I couldn’t help but notice that there are food shops everywhere in Paris.  Here is a cosy looking Alsatian deli, Tempé, on the corner of Volontaires and Vaugirard: 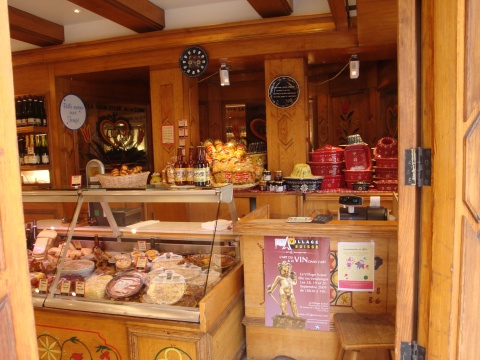 And a little further down the street I was seduced by the foie gras and wild mushrooms on display at Le Comptoir Corrézien: 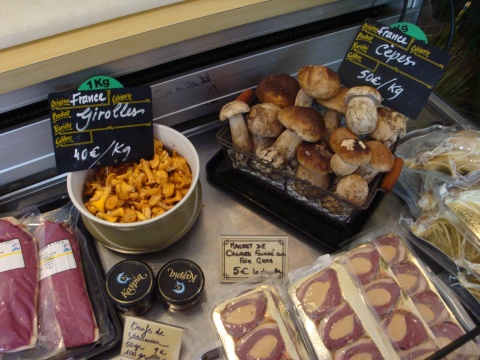 Whilst on the corner I couldn’t help but stop and stare at the cubist cake displays at prestigious urban pâtisserie Lenôtre: 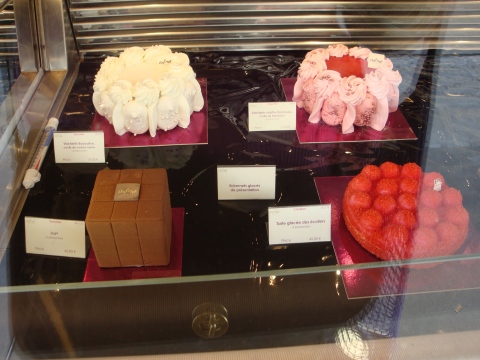 I finally made it to Beau et Bon on rue Lecourbe.  The shop is tiny with shabby chic appeal and is crammed full of interesting things to eat.  Owner Valérie Gentil’s (perfect name!) unique selling point is that she puts on sale the fruits of her gastronomic “Tour de France” each year.  You will find within Beau et Bon not the standard cheeses, pâtés and biscuits you might pick up at Charles de Gaulle airport but lovely, unusual and sometimes frankly wacky items.  I picked up a dinky bottle of deep green pistachio oil destined for a special salad dressing, two bars of nougat flavoured with green olives and  chestnuts respectively, some gorgeous edible pearls for sprinkling over special cupcakes, and a jar of Breton kéramel for spreading on warm toast for breakfast.  I couldn’t carry any more! 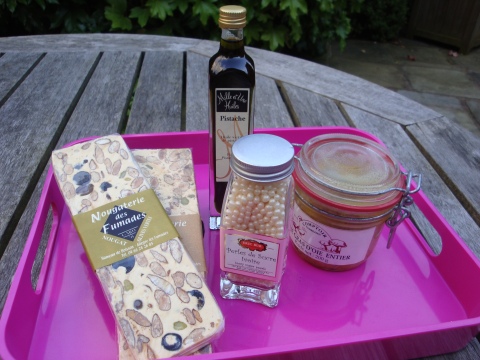 Thank you Clotilde for the tour of Paris – I’m now inspired to start work recommending a food tour of my home city of Manchester..

You are currently reading A day in Paris with Clotilde Dusoulier at The Rhubarb Fool.