This is the latest breakfast in our family project to prepare and eat a breakfast from every country in the world in alphabetical order. The highlight was without doubt these plaited brioche-type breads called Choereg or Choreg which are in fact very simple to make once your plaiting technique is sorted out. As a little girl I had long hair often plaited so this was no problem.

What do I know about Armenia? Very little. “A landlocked country with Turkey to the West and Georgia to the North, Armenia boasts striking scenery with high mountains and caves, lakes and hot springs”. So says the BBC News website, along with a few other key facts: capital city Yerevan; population 3.1 million; land area 11,484 sq miles (ed: about twice the size of the English county of Yorkshire); major religion Christianity.

Armenia has a huge diaspora and famous Armenians or people of Armenian descent can be found all over the world: the composer Aram Khachaturian (whose Spartacus theme was used as the opening music for BBC TV series The Onedin Line) and singers Charles Aznavour and Cher are just a few examples.

This means too that there are many Armenians in Europe and the US wanting to recreate a taste of home, communicating with one another and sharing recipes which conjure up a taste of the homeland. Luckily for me, Armenian recipes are relatively easy to come by on the web,

I started my research with a visit to a Manchester institution, The Armenian Taverna which for as long as most people can remember has occupied discreet basement premises in Albert Square. It looks as if I was in the nick of time as, sadly, the restaurant went on the market last month. 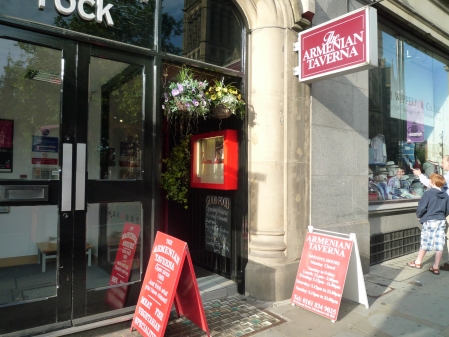 Owner Mafif Alamyan (reputed to be a former Olympic wrestler) was most helpful when describing typical Armenian breakfast dishes. Eggs, tomatoes and cheese featured on his list as did Armenian bread. It was in describing the fruit of Armenia, both fresh and preserved as jam, that he became almost lyrical – he talked of green walnut jam, apricots (the Latin name for the apricot is after all Prunus armeniaca) , cherries and especially mulberries. I recommend a visit to the Armenian Taverna before it vanishes for ever http://www.armeniantaverna.co.uk/

Now I needed to flesh out Mr Alamyan’s guidance with some recipes. First stop was

http://www.thearmeniankitchen.com a vast repository of Armenian food and memories compiled by the Kalajian family now living in the US. Here I found a description of egg scrambled with tomatoes which seemed to fit the bill for a simple breakfast dish – so simple it doesn’t need a recipe, just Mr Kalajian’s simple instructions. “You cut up a tomato as chunky or delicate as you like and stir it into your eggs as you scramble them. Add salt and pepper and eat with bread”. 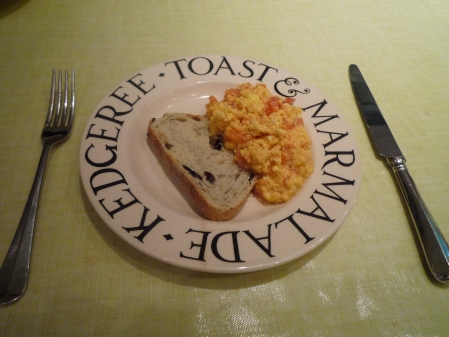 The next challenge was to try and locate mulberry jam. This could be tricky. The only mulberry tree I know of is Milton’s (so called because the poet sat and composed under its shade) in the Fellows’ Garden at Christ’s College in Cambridge. No way was I going to get permission to gather mulberries from there very easily. There had to be another way. Sadly I couldn’t find anyone selling mulberry jam made in the UK but specialist deli Mortimer & Bennett came up with the goods – a middle eastern mulberry jam made in the Lebanon. This would do nicely. Mortimer & Bennett are based in Turnham Green, West London and have a wide range of delectable and out of the ordinary deli items. They sell via their website as well as from the shop and I can vouch that they provide an efficient and personal service. My package of goodies (I just had to buy some oils and chocolate too as they offer free shipping if your order is £50 or more) arrived safe and sound a few days after ordering. Here’s the jam complete with rustic hessian lid cover:

OK so the jam was now sorted so now for the bread. I found three Armenian bread/pastry recipes suitable for breakfast, the first Bishi (sometimes spelt BeeShee, sometimes also called Zeppole), a kind of doughnut, the second Keta, a walnut-stuffed Danish-type pastry and the third Choereg, a plaited sesame sprinked loaf enriched with eggs and butter (also spelt choreg and I reckon its similar to the Greek tsoureki too).

To make the most of the carefully sourced mulberry jam, I opted to make the plainest of the three breads, the choereg choosing a straightforward recipe contributed by Ani from Montreal which I found on Allrecipes.com. I give the recipe below but I did reduce the fat content of the recipe to just 8oz from the 1lb specified, similarly I used 4 eggs rather 5 – it still turned out spectacularly well.

A word on mahleb – this is a middle eastern spice made from the kernel of a special variety of cherry. I’d already started the recipe when I noticed this little bombshell in the list of ingredients so didn’t even attempt to track some down so added a slug of Amaretto and another one of Kirsch to try and provide the required almondy cherry flavours.

In a saucepan over medium heat, combine the milk and butter. Heat until butter is melted, but do not let it boil. Stir in 1 cup of sugar until dissolved, then set aside to cool to lukewarm. Crack the eggs into a large bowl, and stir a little to break up the yolks. Slowly pour in the heated milk mixture while whisking constantly, so as to temper the eggs and not cook them.

In a large bowl, combine the flour, sachets of easyblend yeast, baking powder, mahleb, and salt. Make a well in the centre, and pour in the wet mixture. Stir until it forms a sticky dough. Pour onto a floured surface, and knead in additional flour as needed to make a more substantial dough. Knead for about 10 minutes. Place in an oiled bowl, and set in a warm place to rise for about 2 hours, or until doubled in size.

When the dough has doubled, punch down again, and let rise until doubled. It will only take about half as long this time.

Separate the dough into 5 even portions, then separate each of those into thirds. Roll each of those into ropes about 12 inches long. Plait sets of three ropes together, pinching the ends to seal, and tucking them under for a better presentation. Place the loaves onto baking sheets. Loaves should be spaced 4 inches apart. Set in a warm place to rise until your finger leaves an impression behind when you poke the loaf gently.

Preheat the oven to 350 degrees F (175 degrees C). Brush the loaves with beaten egg, and sprinkle with sesame seeds.
Bake for 25 minutes in the preheated oven, or until nicely golden brown all over.

§ One Response to Armenian breakfast

You are currently reading Armenian breakfast at The Rhubarb Fool.