I will certainly be drinking more beer after my recent Adnams of Southwold brewery tour. After all, what could be more refreshing than a pint of bitter on a warm summer’s evening? This particular beauty was pulled at the Red Lion on South Green in Southwold, Suffolk:

My fellow guests on the brewery tour were exclusively male and sadly mostly fitted the real ale stereotype of bellies, beards and sandals. It doesn’t need to be this way as, happily, our guide for the tour was master brewer Belinda, a no-nonsense microbiology graduate who seemed to have found her perfect niche in life. In a little over an hour, she gently demystified the brewing process throwing in a dashes of chemistry, history and folklore for good measure.

We started with the simple list of ingredients for making beer – malted barley, hops, water and yeast.

Barley first. Appropriately, the most commonly used variety is named “Tipple”. The degree to which the barley is roasted is key to the character of the finished beer – think of how different roast beans produce differently flavoured coffee. Here are some different samples of barley with different degrees of roasting:

My favourite for munching on (we were encouraged throughout to smell, taste and of course drink) was the enticingly named crystal malt (so called because the processing of the barley results in a glassy crystallised finish to the grain or endosperm as the experts call it). Crystal malt contributes biscuity, caramel flavours to the finished beer.

On to the hops. This was the part of the brewing process I particularly wanted to understand. I can’t count the times I have heard someone sniff their freshly pulled pint of beer and enthuse over its hoppy characteristics when all I could distinguish was a general beery smell. What would a hop smell like in isolation?

Belinda tipped a generous heap of dried hops onto a napkin on the table and invited us to smell them. I was first in the queue, almost sticking my nose into the heap, inhaling deeply. I smelt…absolutely nothing! 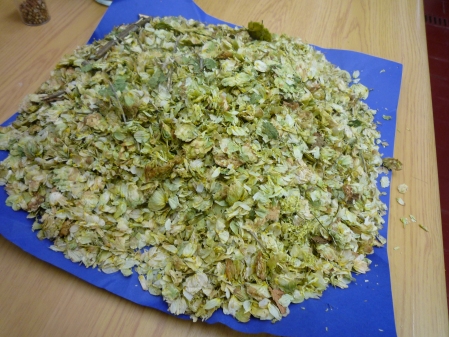 Belinda explained that the hop’s aroma is concentrated in the resin which is concentrated in the base of the dried flower in areas which have a brighter yellow colour. Rub these between your finger and thumb and the aroma is released…aah yes it worked. What I smelt was something a little floral, aromatic, even just a little acrid. A bit like the crushed leaves of pineapple mayweed or even camomile flowers. So this was the characteristic hop aroma I’d wondered about all these years.

I did some homework after the tour. Harold McGee’s amazing food science book “On Food and Cooking” (Heston Blumenthal’s bible) didn’t let me down when it came to hops. He explains that hops (Latin name Humulus lupulus) provide 2 different flavour elements in beer: bitterness from phenolic alpha acids (humulone and lupulone) in its resins and aroma from its essential oils. The aroma of ordinary hops is dominated by the terpene myrcene also found in bayleaf and verbena whereas other more exotic hop varieties are dominated by the more delicate humulene, also other terpenes such as pinene, limonene and citral which give piny and citrus aromas to the hops.

There’s a balance to be struck with hops – the bitterness only comes out after prolonged heating of the brew which of course destroys the aroma. To give the finished beer more aroma, a practice known as dry-hopping is used which means that hop pellets (they are most conveniently used in this form) are thrown into the brew after it has been boiled and they slowly infuse their flavours and aromas at a lower temperature. So beer has a lot in common with herb teas and tisanes and you can’t get much more ladylike than that!

Now for the yeast. This is perhaps the most mysterious of the ingredients. At Adnams they use their own special natural yeast strain which has been kept alive for years. It’s not the same as regular baking yeast but has in fact been used successfully for breadmaking by a Lowestoft baker in the past.

Finally the water, the simplest of the ingredients. Adnams now use the town supply carbon-filtered to remove unwanted chlorine rather than, as previously, water from their own well. Calcium chloride is added to the water to act as a catalyst for the various necessary enzyme processes.

In overview, the process for making beer is relatively straightforward: after all it used to be produced in the home as women’s work in the mediaeval period. It can be divided into 4 stages:

1. Preparing the wort. A mash is made with water and malt which is soaked for 1 and 1/2 hours then heated for 3 hours to produce a sweet coloured liquid which is drawn of ready for stage 2.

2. Boiling the wort – hops are added and the liquid is boiled both to add bitterness from the hops and to inactivate the malt enzymes and so fix the sugar and carbohydrate levels in the mix. The liquid is drawn off and sent to the fermentation tank ready for stage 3. 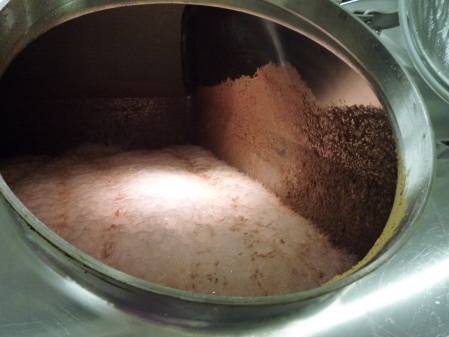 4. Clarification and conditioning
The yeast foam and from fermentation and dead yeast cells are removed by a combination of filtration and fining (adding an agent that attracts and collects the detritus in the beer making it easy to remove the whole lot in a lump. Intriguingly, isinglass, a gelatine like substance derived from fish swim bladders (originally sturgeon) is still used by Adnams as the preferred fining agent. Technically then vegetarians can’t drink beer. With a degree of pragmatism overcoming principle, it seems that the beers can still be deemed suitable for vegetarians as the fish derived content of the beer is so small.

The beer is then transferred to cask or bottle and the bottled beers are pasteurised to increase the shelf life. Secondary fermentation occurs in the cask so it is a living thing with a shelf life of just a few weeks hence the importance of a publican who knows how to keep his beer properly.

So, 4 ingredients, 4 processes – sounds simple but 8 building blocks can give you a seemingly infinite variety of outcomes. Think of music built on 8 notes of the scale or DNA built from just 4 bases…

Going back to my opening question, why don’t women drink beer, I think much of it is in the marketing. Scanning the list of names they give a distinctly masculine old fashioned wartime image (Bombardier, Spitfire, Barnstormer…) or else give an impression of a warm cloudy brew fit only for yokels (Tanglefoot, Waggle Dance, Grumpling). There are so many different beer styles out there that there must be something for everyone. If we could cut the old fart marketing and come up with something cleaner, simpler and more explanatory I think the breweries could be on to a winner in terms of opening up a whole new market beyond the CAMRA afficionados.

And yes, the tour did conclude with a comprehensive tasting of the Adnams range – drink all you like within reason!

You are currently reading Why don’t women drink beer? at The Rhubarb Fool.