Spinach and semolina sound like school dinner hell rather than fond food memories don’t they? Trust me, they really can be good given the right treatment.

The summer holidays are over and the boys are back at school, though in George’s case this is the last time I’ll be able to say this as, all being well, he’ll be a college student next September. I’m still thinking longingly of our week spent in Greece in mid August. We went back to Paleros on the Ionian Coast, a straight repeat of last summer’s holiday but it worked just as well this year too.

The village streets are still lined with enticing little tavernas:

Who wouldn’t want to retreat in here for a leisurely lunch on a hot afternoon?

I love the geometric perfection of the Greek script on a taverna menu: 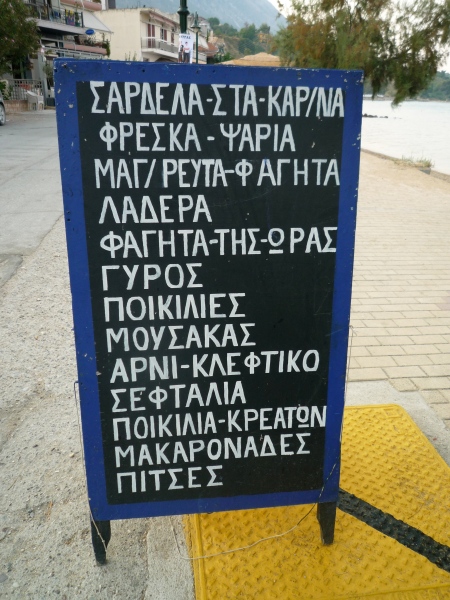 Though an English menu is more practical for the majority of us: 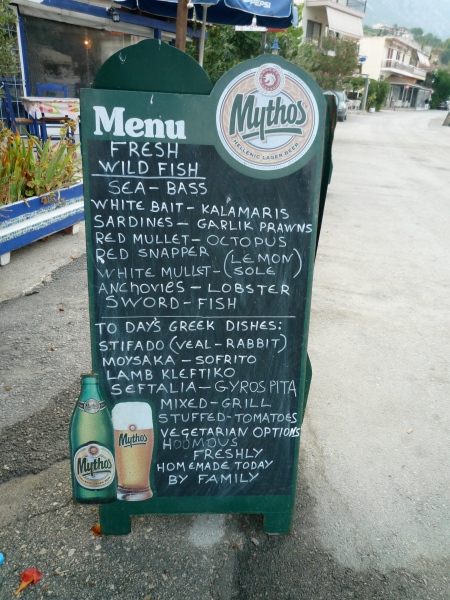 I fact we confined our taverna visits mainly to the evenings and most lunches were picnics in little bays like this one, a short boat across the bay from Paleros: 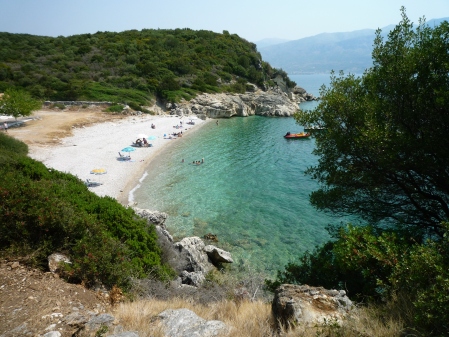 And our picnic foods of choice were wedges of freshly baked spinach and cheese pie from Paleros’ bustling little bakery: 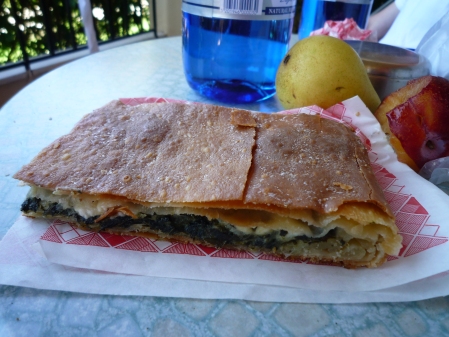 I’d carry these back from the bakery, crisp, savoury and still warm. I’ve sought out an authentic Greek recipe from George Moudiotis’ excellent and informative book “Traditional Greek Cooking – The Food and Wines of Greece” which I’ve adapted and given below. The widespread availability of ready made filo pastry and bags of washed and prepared spinach make this a cinch to put together.

To complete our picnic, we’d add tomatoes and ripe pears or watermelon wedges to the bag, plus a little sweet something from the bakery. The Greeks clearly have an extraordinarily sweet tooth and, sandwiched between east and west, their baking has a combined culinary heritage. The buffet table at our hotel would be crowned by over-the-top layered and decorated sponge cakes in the western tradition adorned with swirls of crème patissière and whipped cream, highly coloured icings and glacé fruit. My preference was for the more austere but deeply sticky and sweet middle eastern influenced pastries, kourabiedes, baklava, kadaifi and the like. Here’s the simple yet enticing display of these goodies at the local bakery, reverently screened as a protection from marauding insect life:

I tried out the moist little lozenges topped with sesame seeds and a single decorative almond for the first time. I tried desperately hard with my phrase book modern Greek to find out their proper name but ended up with me and the bakery lady smiling and helplessly shrugging shoulders as I failed to understand what these cakes were called. Whatever they are called, they were dense, moist and syrup-laden, a great energy boost after a long swim:

Looking for what they might be in my Greek food bible “Traditional Greek Cooking” once again, I found a recipe for a simple syruped semolina cake called Revani. This is a traditional cake from Northern Greece which I think sounds a little less dense than the cake I tried but similar in flavour and appearance. I give my adapted version of the recipe below and will be trying it out over coffee very soon to bring back those memories of summer.

In a large frying pan big enough to hold all the spinach, fry the chopped spring onions in 3 tablespoons of the olive oil until soft but not browned. Tip into a large mixing bowl and set aside.

Add the spinach to the frying pan and cook for about 3 minutes until wilted. Tip into a colander and press out as much excess water as you can. Add the drained spinach to the mixing bowl which already contains the cooked spring onions and add the feta, beaten eggs, chopped fresh herbs, salt, pepper and nutmeg. When seasoning, don’t add too much salt as the feta is already quite salty. Mix well to combine.

Brush a 4cm rectangular deep baking dish with oil. Metal is best to conduct the heat and cook the pastry. Choose a tin that is a little smaller than the dimensions of the filo sheets. Lay the first sheet of filo over the base letting the edges overhang. Brush the sheet with oil. Repeat until you have used half the sheets of pastry. This constitutes the base of the pie. Spoon over the filling, spreading it evenly over the pastry. Cover with the remaining filo sheets in a similar manner, brushing each one with oil as you layer up, not forgetting to brush the top sheet with oil.

Using a really sharp knife, score the top surface of the pie marking out 6 or 8 portions. Prick the surface of the pie evenly all over to give an additional way for steam to escape. Trim the overhanging pastry edges but still leaving a small border. Fold this small border over the top and press lightly to seal. Spritz the pie with a little water to prevent the pastry from curling and bake in the preheated oven for about 45 minutes or until the pie is golden brown and crisp.

Using an electric mixer, whisk the eggs and sugar together at high speed for about 10 minutes, adding the milk and vanilla extract mix gradually, until the mixture is pale and fluffy. Sift the flour mixture over the whisked egg mixture in three batches, gently incorporating each batch with a balloon whisk trying to retain all the whisked air bubbles in the mixture.

Pour the mixture into the prepared cake tin and bake in the preheated oven for 40 minutes or until the cake is golden brown and cooked through.

While the cake is baking, make the syrup. Put the sugar and water into a medium saucepan and bring to the boil without stirring. Once the sugar is dissolved, boil for 2 to 3 minutes. Remove from the heat and add the butter, lemon juice and zest and leave to cool.

Spoon the cooled syrup over the hot cake shortly after it comes out of the oven. Do this carefully as you do not want the cake to collapse. Leave the cake in its tin to cool completely. Cut it into lozenges and decorate with toasted whole blanched almonds.

You are currently reading Spinach pie and semolina cake from Greece at The Rhubarb Fool.