Twelfth night is behind us, the decorations are down and I’m almost into the second week of the now traditional alcohol-free January. Time to take stock of the new year festivities which this year took the form of a German-themed 3 day event hosted by our friends Mike and Janet. We ate our fill of homemade bratwurst (and that was just for childrens’ tea!), Mike’s excellent seeded and rye breads and lots of good wine.

Here’s the menu for the main event on New Year’s Eve:

Janet blithely announced on the morning of the 31st that our work preparing this feast would be “relatively light”. As if! It took us most of the day to get everything ready, and once we were done, Janet and Shelley set up the mincer, stretched the skins and produced several pounds of home made bratwurst. I watched in amazement as Shelley and Janet coaxed the pork and veal filling into seemingly endless pink links. My contribution to the project was a bit of washing up.

Back to the main event. My task was preparing the obatzda cheese spread and home made pretzels to serve alongside. I’d made pretzels before using an authentic Greg Patent “Baker’s Odyssey” recipe which I did again, this time dipping the pretzels in a bicarb solution rather than full-on caustic soda. I didn’t want to take the risk of chemical burns to self and children and damage to someone else’s home that working with caustic soda solution entails. After the effort of making the pretzels, whizzing up the obatzda was relatively simple. It was served deumurely from a small earthenware pot rather than in great scoopfuls on a big rustic wooden board as is traditional in Munich. 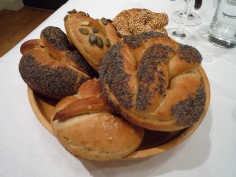 Next course was the trout, poached in a delicate riesling wine along with leeks and carrots for flavour and colour.

The main course was a long-marinated and 5 hour simmered majestic beef Sauerbraten served with authentic spätzle noodles and a crunchy cabbage and caraway salad alongside, a good contrast to the meltingly soft been and noodles. Janet took charge of the spätzle, laboriously pushing the batter through a colander into boiling salted water in true Hausfrau style. The technique of cooling the cooked spätzle in iced water then briefly sautéing in hot oil and butter when ready to serve makes them practical for a dinner party.

Pudding was a magnificent yeasted pear and hazelnut cake which Shelley made. We managed to dovetail our use of the Kenwood mixer and oven very amicably. This was a truly magnificent cake, perfect served warm in delicate slices with billowy whipped cream. If there’d been any left, I’d imagine it would have been rather good served with coffee next morning!

The meal concluded with cheese and port, then a rousing team demonstration of “Gangnam Style” to bring in the New Year and embarrass the children. Start as you mean to go on.

Traditionally served with soft pretzels as snack. Adapted from a recipe from the Bräustüberl Weihenstephan in Munich. Serves 6 as a starter or snack.

Process the Brie to a mass in a food processor. Add the butter, cream cheese, seasonings and beer and process again to combine. Remember that the cheeses are already quite salty so go easy on adding salt at this stage.

Refrigerate for a couple of hours to allow the flavours to combine and mellow. You can serve the spread packed into a pretty earthenware pot as we did, or more traditionally, serve in scoops or quenelles on a rustic wooden board alongside the soft pretzels and garnish with red onion rings, chives, and lettuce – a Bavarian ploughman’s lunch I suppose.

In a small bowl, beat together egg yolks, egg, and milk.In medium bowl, whisk together flour, nutmeg, salt, and pepper. Add egg mixture to flour mixture and mix with wooden spoon just until well blended. Do not overmix. Refrigerate, covered for at least 1 hour.

Bring a large pan of salted water to boil. Fill a large bowl with iced water. Place a large-holed metal colander on top of the pan. push one-third of the batter through the holes into the water using a flexible spatula. We think that a food mill set on the large hole screen might do this job pretty well but haven’t tried it out yet. Cook for a minute or two then transfer quickly with a slotted spoon to the bowl of iced water. Make 2 more batches in the same way.

When the spätzle are cool to touch, drain well and toss with 1/4 cup oil. (They can be prepared up to this point and refrigerated, covered, up to 2 days.)

When you are ready to serve, place a large sauté pan over high heat and in it heat the remaining 1/4 cup oil. Add the spätzle and cook, without moving the pan, until undersides are brown, about 2 minutes. Add butter and sauté until golden brown, about 2 minutes more. Season to taste with salt and pepper. Sprinkle with parsley and serve.

Serves 8 generous portions for teatime or 12 dainty portions for dessert with whipped cream. Adapted from a recipe on Epicurious.com.

For the enriched yeast dough

Begin by making the enriched yeast dough. Ideally you need a stand mixer (Kenwood or Kitchenaid ) to attempt this recipe.

In the bowl of a stand mixer fitted with a dough hook, stir together the flours, fast action dried yeast and salt. Pour in the milk, turn the mixer on to a low speed and mix for one to two minutes until the flour is moistened and you have a fairly dry shaggy mixture.

Scrape down the sides of the bowl using a plastic dough scraper or rubber spatula. Turn the mixer back on to a low speed and add the egg mixture little by little, then the sugar. Increase the speed to medium and beat for about 3 minutes by which time the dough should have formed into a ball.

Reduce the mixer speed to low and add the butter in 2 tablespoon sized chunks, beating until almost incorporated before adding the next. You will end up with a very soft cake-batter-like dough. Increase the mixer speed to medium and beat until the mixture comes away from the sides of the bowl, about 10 minutes.

Cover the bowl with cling film or a plate and let the dough prove until doubled in size, at least 1 and 1/2 hours, maybe longer.

While the dough proves, prepare the roast pear topping. Preheat oven to 180°C fan.
Peel pears, cut lengthwise into eighths, and cut out the cores. Toss pears with melted butter and 2 tablespoons brown sugar in a 13- by 9-inch glass or ceramic baking dish and arrange in 1 layer.
Roast pears, gently turning and stirring occasionally, until just tender and lightly caramelized, about 45 minutes. Transfer pears to a plate with a slotted spatula. Stir bread crumbs into baking dish, scraping up all brown bits and butter, then transfer to a bowl. Stir the hazelnuts, cinnamon, and remaining 2 tablespoons brown sugar into bread crumbs.

Now you are ready to assemble and bake the küchen. Reduce the oven temperature to 160°C fan.
Knock back the proved dough and transfer it to the lined cake tin and and spread it evenly across the base of the tin with a rubber spatula.

Bake the küchen for about 40 minutes until firm to the touch and deep golden brown. Cool the küchen in its tin on a rack for about 20 minutes, then carefully remove from the tin. Serve warm or at room temperature with softly whipped cream.

You are currently reading German new year at The Rhubarb Fool.