“Imagine unspoilt castaway islands. With bone-white beaches that you can bag all to yourself. And a unique blend of African, Portuguese and Brazilian cultures. No wonder summer holidays to Cape Verde are the hottest buzzword in travel right now. Marooned off the west coast of Africa, they sit serenely and modestly – almost as if they’re hoping to shirk the limelight.”

So says the blurb on the Thomson holidays website which is a pretty good introduction to the Cape Verde archipelago. This group of 10 main islands and 5 smaller islets, most of which are mountainous but with some fertile land, was uninhabited until its discovery by Portuguese explorers in 1456. Just for the record, the largest island is Santiago, the capital city is Praia and the islands gained independence from Portugal in 1975.

The strategic location of the islands lying in the Atlantic off the coast of West Africa meant that they became an important staging post in both the slave and whaling trades. Interestingly, there are more Cape Verdeans and their descendants living abroad than there are on the islands themselves having left the islands during various waves of emigration. Music and football are clearly important elements of the Cape Verdean culture. Famous musicians of Cape Verdean descent include Lena Horne and the Tavares Brothers – Ralph, Pooch, Chubby, Butch and Tiny – perhaps most famous for their rendition of “More Than A Woman” on the seminal Saturday Night Fever soundtrack from the seventies. Well known footballers of Cape Verdean descent include Nani, Henrik Larsson, Gelson Fernandes and Patrice Evra.

The food of the islands is very much a reflection of its history and geography – a fusion of Portuguese, South American and African ingredients. Nowhere is this more true than in Cachupa, the islands’ national dish, a hearty stew of hominy corn, red kidney beans, spicy linguiça sausage, salt pork, sweet potato, potato, tomatoes, onion and cabbage. Fortunately for me, Cachupa refogada, left over cachupa reheated and fried with plenty of softened onion is a typical breakfast dish so it had to go on the menu. 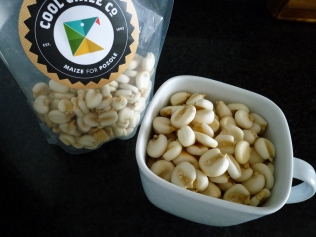 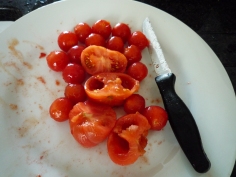 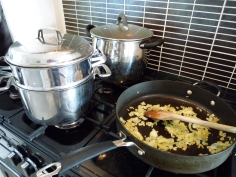 The recipe I used for Cachupa is adapted from this one http://www.mistress-of-spices.com/2011/03/cachupa-national-dish-of-cape-verde.html

I decided to add another typical Cape Verdean dish, cuscus, to round off my breakfast menu. I found a video recipe here presented by the charming but oddly named Ideally Ilca on her Island Cuisine channel. White cornmeal is mixed with water to form little pellets. The resulting cuscus is steamed in a cake shape then served as a breakfast cereal flavoured with sugar and powdered cinnamon and eaten with cold milk. I followed Ms Ilca’s instructions to the letter and ended up with a successful plateful of Cape Verdean comfort food, agreeably soothing after the spicy Cachupa refogada: 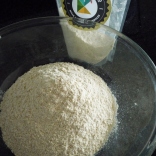 Finding the recipes was the easy part: somewhat more of a challenge was tracking down authentic ingredients. Let’s start with hominy corn. I didn’t even know precisely what it was until I consulted Harold McGee. His encyclopaedic “On Food and Cooking” explains succinctly that “hominy consists of whole corn kernels…cooked for 20-40 minutes in a solution of lime or lye then washed of their hulls and excess alkaline solution.” The process is known as nixtamalization from an Aztec word and though it sounds a bit yucky and chemical-infused in fact produces a tasty, chewy and nutritious end result.

I tracked my hominy corn plus white cornmeal for my Cape Verdean cuscus down from ever-reliable Mexican food specialists The Cool Chile company. I sourced my linguiça sausage, plus a few extra Portuguese goodies, from the straightforwardly named www.portuguesefood.co.uk.

I packed up my specialist ingredients and headed for the coast to prepare and cook my Cape Verdean breakfast – nowhere exotic, just the good old British seaside. We were joined for a long weekend by friends Mike, Theo and Christopher who tucked in manfully (though I suspect they were hoping for a full English…)

Pass the piri piri sauce please. Did someone say it’s just like Nando’s? 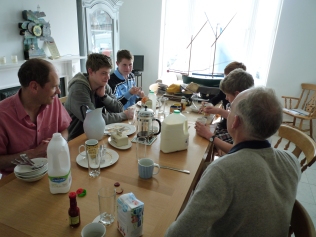 Adapted from a recipe on “Mistress of Spices” blog.

Serves 8-12 depending on appetite.

Rinse the corn and the beans. Drain and set aside.

Heat 4 tablespoons of the olive oil in a large lidded saucepan or stockpot. Add half of the chopped onion and one bay leaf. Sauté until the onions are translucent. Add the corn and the beans. Stir well and add the water. Bring to the boil, then cover, reduce the heat and simmer for 2 hours. Add the stock and continue simmering until the corn and beans are soft and cooked through (this may take a further 2 hours ie 4 hours in total).

In a second large lidded pot, heat the remaining 4 tablespoons of olive oil. Add the remaining chopped onion, garlic and one bay leaf. Stir well and sauté until the onions are translucent.

Add the linguiça, bacon and chili powder. Stir gently over a low heat until cooked through, about 15-20 minutes.

Add the cooked corn and beans and their cooking liquid to the meat mixture. Then add the potatoes and cabbage, mix well, add tomatoes and cook until the vegetables are tender and the liquid reduced, about 15-20 minutes.

Taste and correct seasoning. Cachupa tastes even better the next day sautéed with some chopped onion for breakfast, called Cachupa refogada.

Add the water to the cornmeal very slowly. Mix with your hands to form a clumpy mix. Put in double boiler (I used a steamer set over a pan of boiling water). Sprinkle with plenty of powdered cinnamon.

Steam for 25 mins. It will form a sliceable cake. Serve with cold milk, honey, butter and coffee.

www.portuguesefood.co.uk Supplier of Portuguese sausages, hams, wine and other goodies.

You are currently reading Cape Verdean breakfast at The Rhubarb Fool.